Photography, and more specifically digital photography, has exploded in popularity as of late.  Thanks to the iPhone (and other phones with built-in cameras), it’s almost impossible to find someone who doesn’t take pictures on a daily basis.  The reason isn’t due to these phones’ incredible photo capturing abilities or their extensive feature set; it’s due to their convenience.  Your phone is always with you, which means your camera is always with you, which means when that when the decisive moment of the perfect photo is about to occur, you capture it with the only camera you have on hand (even if it does produce lackluster results).

At the other end of the digital camera spectrum there is the DSLR – larger, interchangeable lens cameras that offer a huge variety of photo capturing options.  The problem with DSLR cameras, however, is the one I’ve already mentioned.  They’re big, bulky and uncomfortable, and they’ll force you to miss great photos, because over time, you’re going to get tired of carrying them around and leave them at home.

Enter the Ricoh GR (or more specifically, the new digital Ricoh GR V).  Simply put, it’s the only camera in the world that takes virtually everything great about a DSLR and places it inside a camera body small enough to take anywhere.  For its price ($799), there’s not a better camera in existence.  Read on and I’m going to tell you why. 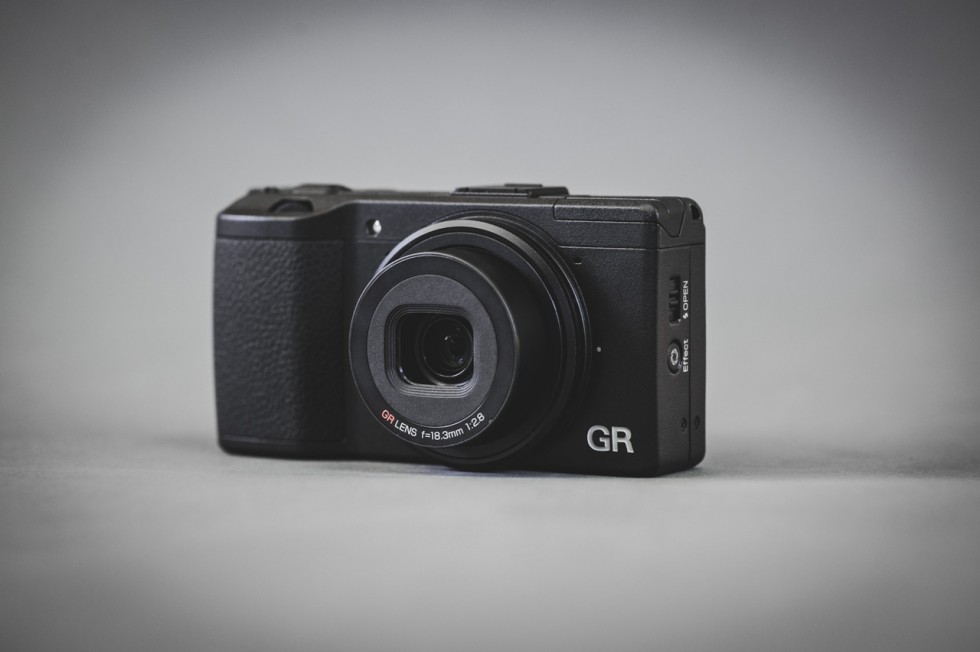 There are two ways of looking at the Ricoh GR.  If you’re an avid iPhone user that’s new to conventional photography, the Ricoh GR is a compact camera that’s as simple to use as your iPhone; is significantly faster; and will produce far superior results.  More importantly, it’s a camera that as you learn its various functions, will allow you to explore the principles of photography, thus making you  a better, more creative photographer.  Add an optional Eye-Fi card, and you can even send photos wirelessly to your phone, making adding photos to Instagram, Facebook, etc. a breeze.

If, on the other hand, you’re already a DSLR user, you’ll feel instantly at home with the Ricoh GR, as it’s quite literally a DSLR in a compact body. I’ve used numerous point and shoot cameras that offer a stripped down number of shooting options, and the GR isn’t one of them.  Virtually every function found on a DSLR is built into the Ricoh GR, with the two differences being that the lens is fixed and there’s not a built-in viewfinder (although you can add one).  Every other camera feature (various focus and metering modes, aperture/shutter/manual shooting options, etc.) are all in place.

What this means is that regardless of your photography background – whether it’s an upgrade from you current smartphone / point-and-shoot camera or a second camera to add to your DSLR – the Ricoh GR will help you create incredible photos you simply can’t get with any other camera.

The list of Ricoh GR tech specs reads exactly like that of a traditional DSLR, so if you’re a camera nerd, you’re going to love this; if you’re not, feel free to skim.  Technically speaking, the heart of the Ricoh GR V is a 16-megapixel APS-C size image sensor paired with an 18.3mm f/2.8 fixed lens that is equivalent to a 28mm lens on a full-frame camera.  Like other DSLRs, you have the option to shoot in auto, program shift, aperture-priority, shutter-priority, manual, bulb, time, and video modes; and unique to Ricoh/Pentax, you also have the option of a shutter/aperture priority mode (TAv), which automatically selects the optimum ISO sensitivity based on the shutter speed and aperture you set.

From there, the list of GR tech specs is huge, so I’m just going to list some of my favorite elements.  First and foremost, startup time on the GR is only a second.  There’s nothing worse than missing a photo because you’re waiting for your camera to turn on, and with the GR, I’ve yet to have it happen.  The 3-inch, 1.23 million dot LCD screen is stunning, and makes capturing photos even in bright sunlight exceptionally easy.  There’s a macro-mode, which allows you to focus as close as 3.9-inches.  There’s also a crop mode equivalent to 35mm on a full frame camera, which allows you view and shoot at 35mm directly in camera.  There’s a built-in flash and hotshoe, allowing you to shoot in any lighting conditions with the camera’s flash or use a separate flash (I’ve even used mine with my Nikon SB-910).  There’s the option to shoot in either JPEG or RAW or a combination of both.  There’s the ability to shoot 1080p h.264 HD video.  There’s even a dual-axis electronic level to help you compose more intricate shots.  Then there’s the various bracketing options, flash modes, ISO up to 25,600… you get the idea.

No matter what camera you’re using, I can guarantee you’re going to be in awe that Ricoh was able to fit so many shooting options and features into a camera this small.  It’s really a marvel of photographic engineering. 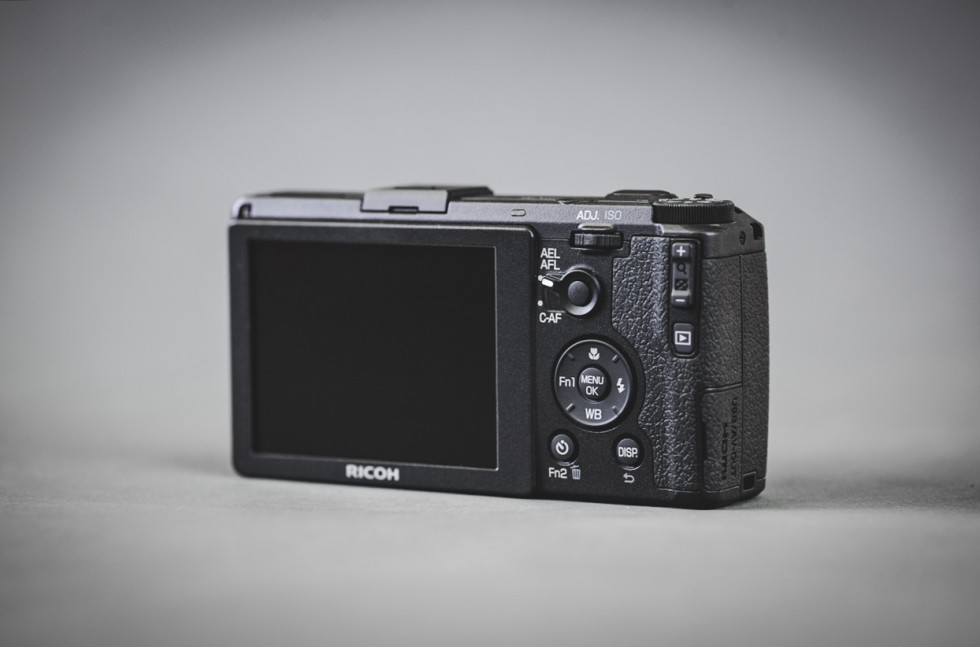 When you look a the Ricoh GR, it appears incredibly unassuming.  But once you start using it, you immediately realize it’s a photographer’s camera.  Almost all of the buttons are customizable, so you can set your most used functions in whatever configuration you prefer.  Coming from a Nikon D3s and D800E, I’m accustomed to having all the camera settings at my fingertips, and interestingly enough, the Ricoh GR has exactly the number of buttons I needed to feel comfortable navigating between my preferred settings.  It’s so good, in fact, that with my current button configuration, I don’t even have to use the menus to make setting changes.

Lastly, and most importantly, the greatest advantage of shooting with the Ricoh GR (especially when compared to a DSLR) is that the GR doesn’t change the dynamic of a shot.  When you shoot with a DSLR, everyone sees it, and it affects the way they act.  With the GR, half the time I don’t even look at the LCD when I shoot, and most people don’t even realize I’m taking a picture.  The result is that the GR  helps you create candid, extraordinary shots that would simply be impossible to capture with a conventional DSLR. 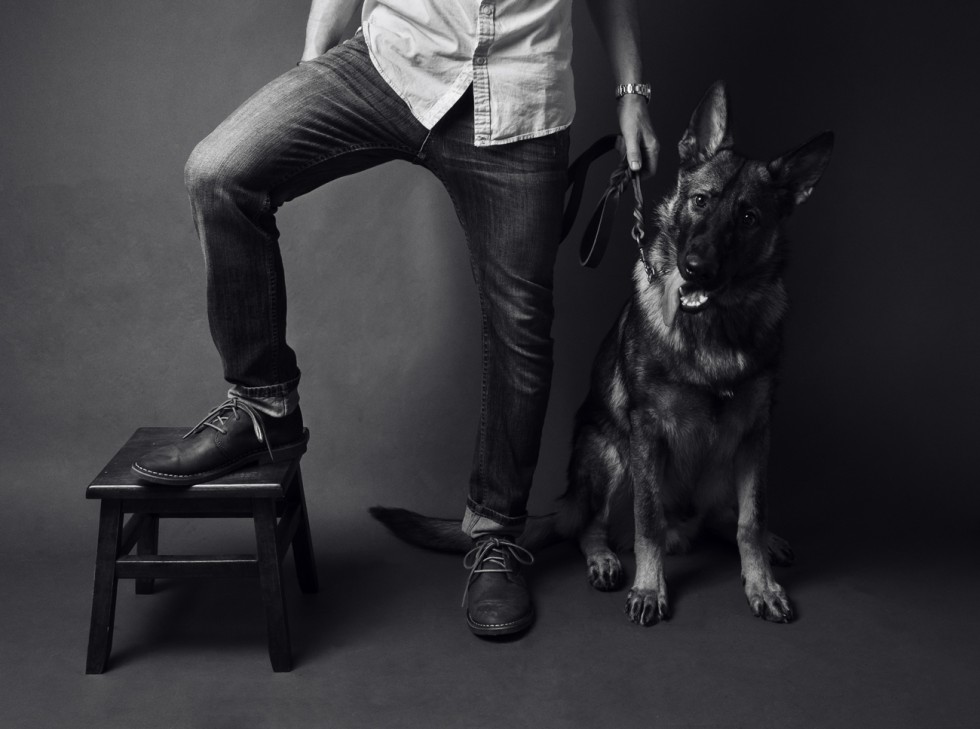 In a word, I’d describe the performance of the Ricoh GR as magical.  Every time I use it I’m astonished that a camera so small is capable of delivering such superb results.  In many ways, the GR feels less like a digital camera and more like a film camera.  Shots at low ISOs are noise-free and incredibly sharp.  At higher ISOs noise does appear, but it’s not the ugly digital noise most cameras suffer from.  It’s much more of a film-like grain look, which gives the GR shots a certain character that I’m a huge fan of.

In reading what other owners think of the GR, it’s common to see the GR used for black and white photography, and in this application, the GR is superb.  It offers tremendously rich mid-tones, and I’ve found that with most shots I take with the GR, I tend to do a quick custom b&w process  in Lightroom with great results.  It’s not a film camera, but you’ll be hard pressed to find a camera that can better duplicate the feel of shooting with film.

I don’t shoot in color with the GR as much, simply because I love black and white for quick snaps, but when I do, I’m always happy with the results.  JPEGS are bright and crisp, but typically I tend to shoot RAW and do my own tonal work in Photoshop, so the colors are really at my discretion.  In this respect, working with the Ricoh GR’s photos tend to feel exactly like that of any other DSLR, and I treat both identically when performing any processing.  To highlight this point, we thought it would be fun to take the GR into the studio, so I actually gave my Ricoh GR to our photographer for an upcoming shoot, and he shot our next fashion feature entirely with the Ricoh.  You can see the photos in the gallery below, but he so blown away with the quality of the photos he’s actually going to get one for himself.

And that’s really the only thing I can say about the Ricoh GR:  it’s simply amazing that you can get such incredible photos from a $799 camera that fits in the pocket of your favorite pair of jeans.

The Ricoh GR is awesome, it’s as simple as that.  A lot of people think not having a zoom lens on a camera is a limitation, but it’s the opposite.  There’s something so freeing about using the fixed-lens GR – you go out, you stop worrying about what obscure detail you can zoom in on, and you become more connected to your immediate environment.  The most memorable photos are those impulsive moments you see happening right in front of you, and to capture these shots, the Ricoh GR is absolutely superb.

You can learn more about the Ricoh GR at the official Ricoh website, and see some shots we made with the GR in the gallery below. 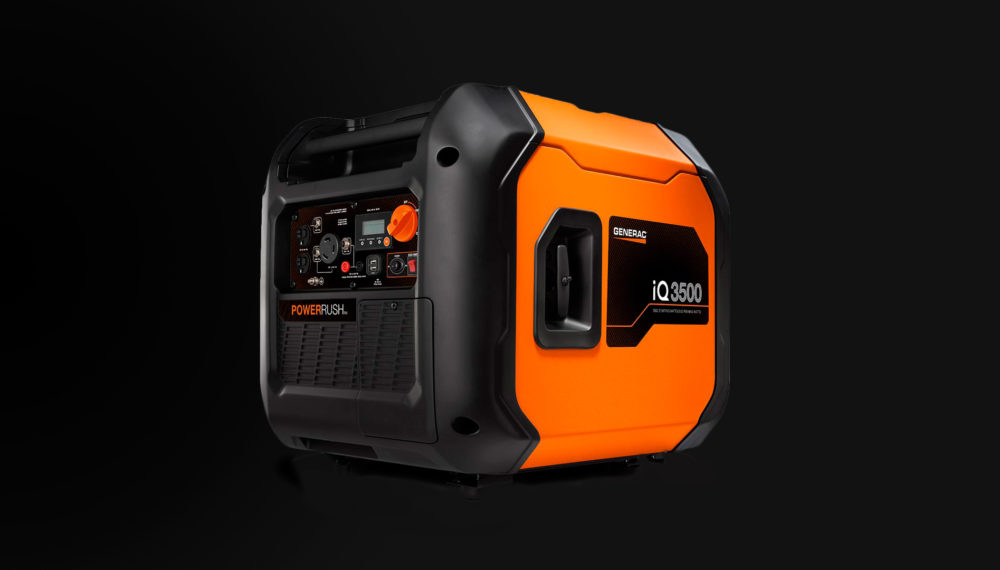 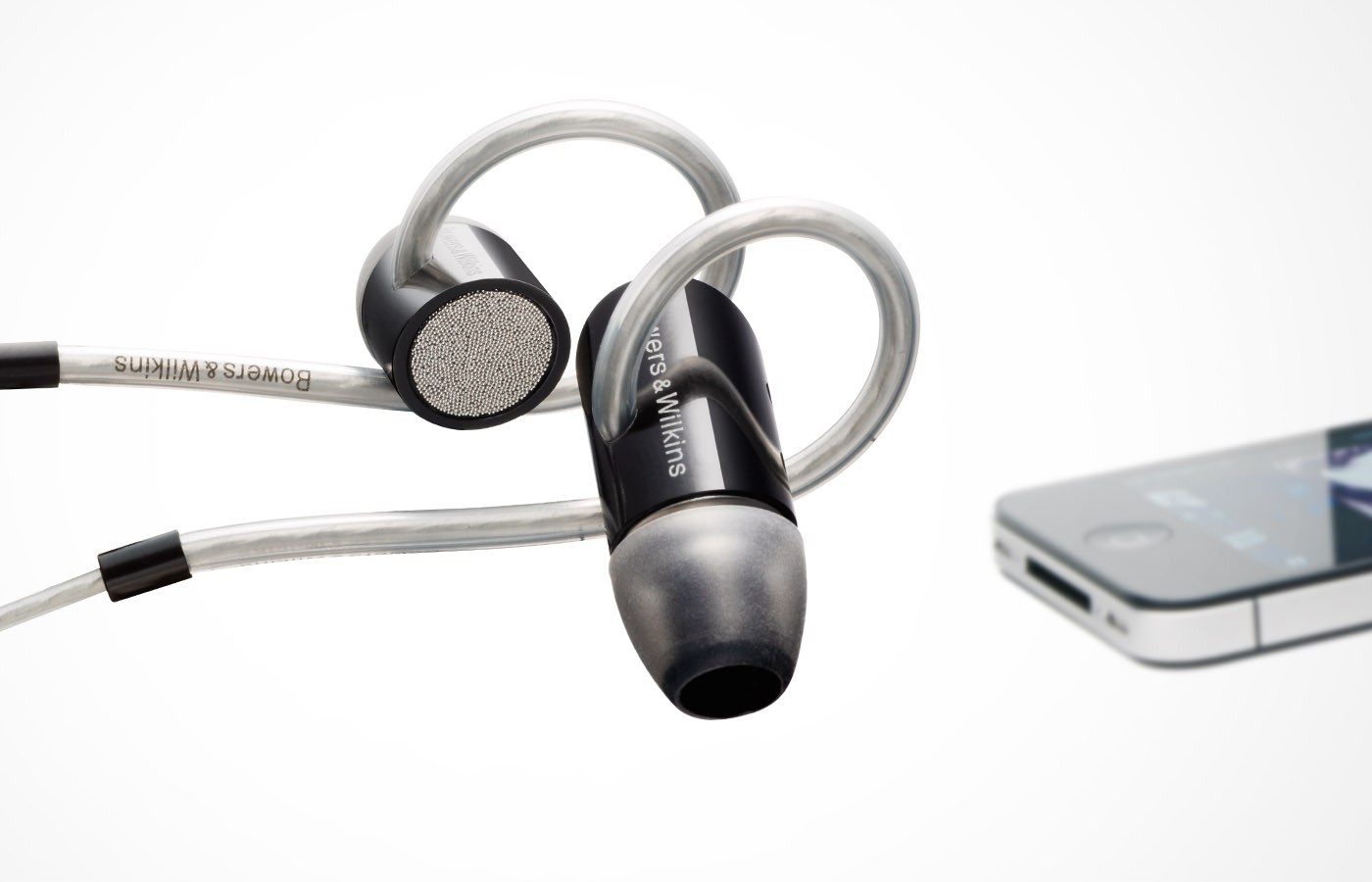 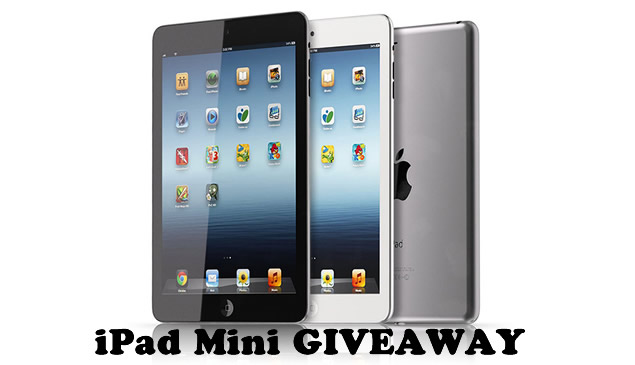 GIVE AWAY: Win an iPad Mini