Yesterday we saw MERCEDES AMG PETRONAS driver Lewis Hamilton swap his F1 car for the new A45 AMG and while he had nothing but rave reviews for the hot hatch, now he’s swapped his Formula One car for something a little faster and more his style. Hamilton flew with the Royal Air Force Aerobatic Team as part of the team’s build up to the British Grand Prix weekend at Silverstone.

Hamilton and BBC’s David Coulthard experienced first hand one of the Royal Air Force Aerobatic Team, more well known as the Red Arrows, practice sessions. The entire day was filmed by the BBC to use as pre-race coverage for this weekend’s British Grand Prix. The special coverage gives a behind the scenes look at the Red Arrows and how their world overlaps with the world of F1.

Engineers and mechanics from the Mercedes AMG Petronas team had a chance to see just how the Royal Air Force operates and how the Red Arrows pilots rely heavily on the expertise and precision of their engineers and support staff, known as the Blues, to perform their perfectly every time. This behind the scenes looked proved invaluable to Lewis and the team as Lewis relies the same on his team. 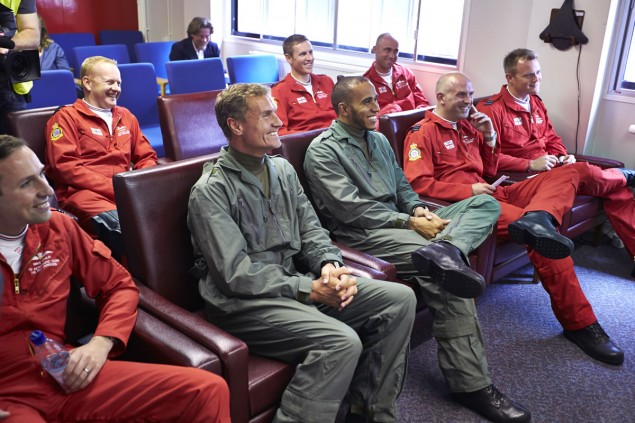 Before heading up in the air, rigorous medical and safety measures were taken to ensure the safety of Mercedes’ world champion driver everyone. Once completed, the Blues, Hamilton and Coulthard got to experience the Hawk T1 jets in a three-ship formation with Red1, Red 6 and Red 10. During their 30-minute flight, the pair experienced upt to 4.5Gs, a similar G-Force to those felt in F1, while going through a series of ‘loops and rolls’ in their jets. Once back on the ground, Lewis took out the MGP W02 demo car, for a spin along the runway at RAF Scampton while David flew in Red 10 overhead. Both the car and the jet approached top speeds of 198 mph and 520 knots (598 mph).

Lewis Hamilton “had an amazing day with the RAF Red Arrows,” “I absolutely loved the experience of flying with their team. To see first-hand how skilled the pilots are, and the similarities to the level of team work and precision that we need to get the best out of a Formula One car, was fascinating. The loops and rolls in the jet are such an intense experience and I’ve got so much admiration for those guys and their unbelievable flying skills. They actually let me fly the jet on the first flight; the pilot brought me up into position and then gave me the controls. That was intense and it’s surprising how sensitive the controls are and how tough it is to keep in formation. To then jump out of the jet and drive our Silver Arrow down the runway at 300 kph with a jet screaming 100ft overhead, hitting close to1000 kph (621 mph), was beyond cool. We’re used to big lateral G loads in Formula One but experiencing negative vertical G is something else. A big thank you to everyone at RAF Scampton for such an incredible experience, for allowing us to go behind the scenes of their practice display, and for making us feel so welcome.” 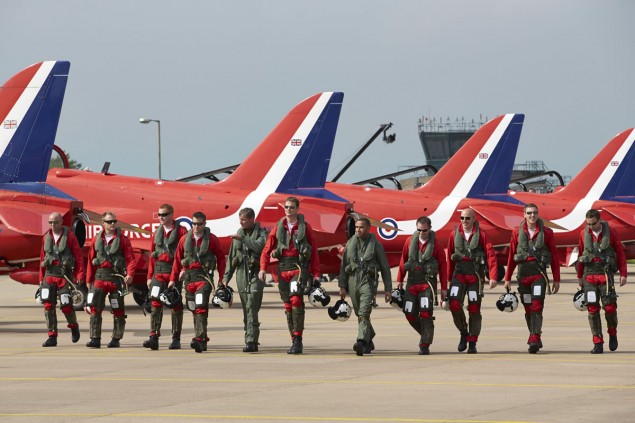 Squadron Leader Jim Turner, Red 1, Team Leader of the Royal Air Force Aerobatic Team said “the Red Arrows were honored to be able to host Lewis Hamilton and the MERCEDES AMG PETRONAS Formula One Team at our home base at RAF Scampton. Both Lewis and David Coulthard flew with the team, starting with a shakedown sortie to see if they were up to flying in a practice display. They both did very well so then flew with us for a practice display sortie which the team had scheduled and seemed to relish the opportunity to take part in the show.”

“It was a privilege to meet both Lewis Hamilton and David Coulthard and work with the MERCEDES AMG PETRONAS Formula One Team” reported Squadron Leader Mike Ling from Red 10 and Road Manager of the Royal Air Force Aerobatic Team. Link and Coulthard had a chance to compare notes on the differences and similarities between driving a F1 car and flying a jet at nearly tripple the speed. Coulthard was surprised with how sensitive the jet’s controls were and impressed with the skill it takes to fly in such close formation. 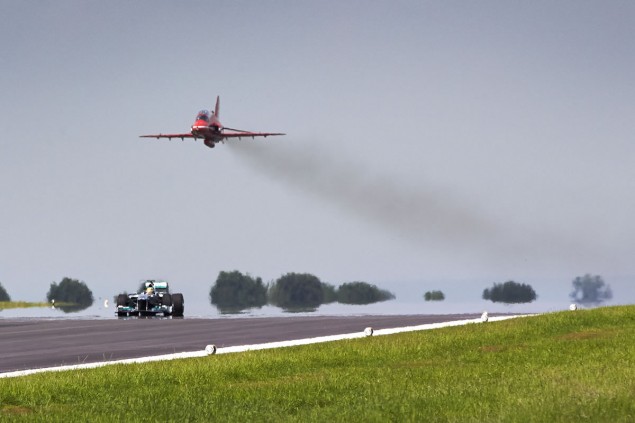 What came across most during the day, was the similarity and the importance of teamwork required in both Formula One and in the Royal Air Force. The driver of the car may be the face of the team but they’re only the tip of the iceberg. The heart of the team are the engineers and technicians in the Mercedes garage and factory. It is no different for the Red Arrows, there are nine pilots flying, but there are 100 engineers and support staff who ensure the they’re able to do what they do and come home safely. 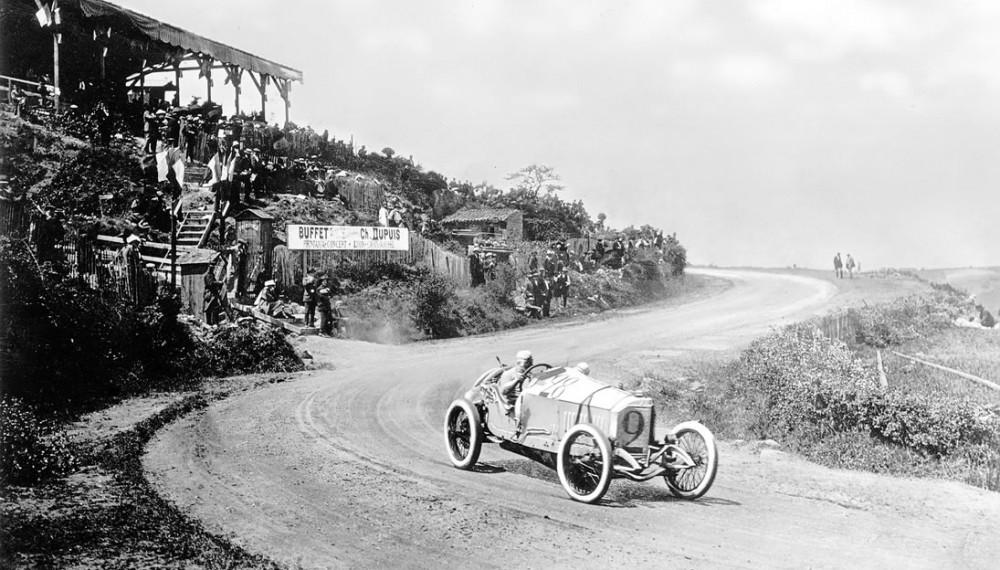 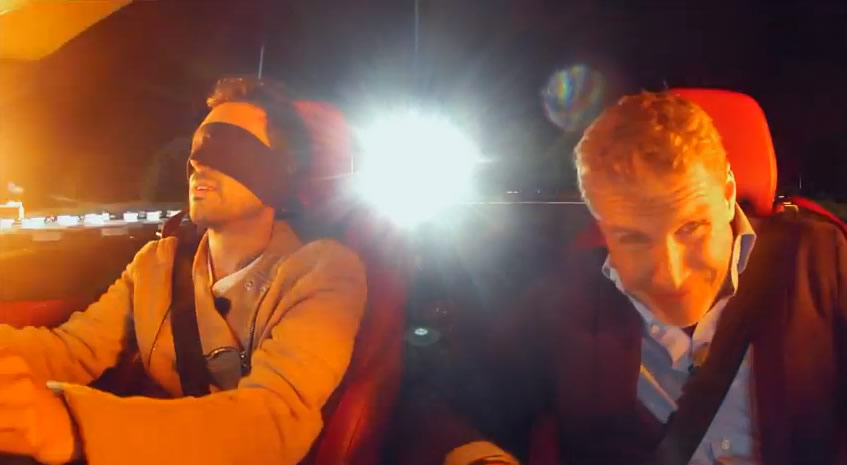 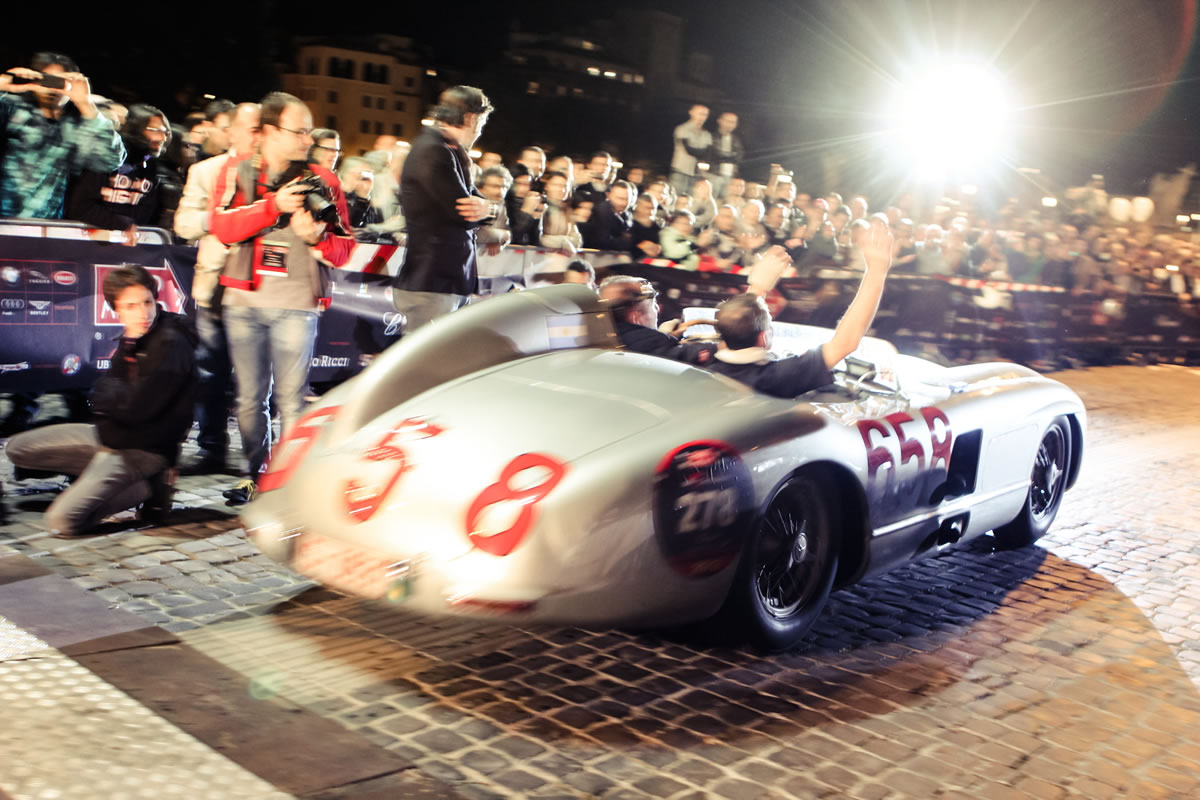 Mercedes-Benz at the 2013 Mille Miglia