On 29 January 1886, Carl Benz’s dream comes true: the Mannheim designer applies for a patent for his “vehicle with gas engine operation”. Patent number DRP 37435 is regarded as the birth certificate of the automobile, and gave its name to the Patent Motor Car. The world’s first car was a distinctive design in which the engine and chassis formed an organic unit. Benz designed it as a three-wheeler as he was not convinced by the drawbar steering used for coaches. Carl Benz’s decisive achievement is the consistency with which he makes his vision of the “car without horses” a reality: he has the idea of a motor car, patents it, designs, builds and tests it. He launched the vehicle on the market, he mass-produced it, developed it further and therefore made his invention usable. The Benz Patent Motor Car ushered in a new era of personal mobility. Mercedes-Benz Classic presents a faithful replica of the vehicle at the Classic Days in the “Green Park”. An actor playing Bertha Benz accompanies the Patent Motor Car. Carl Benz’s wife significantly supports her husband’s development and undertakes the first long-distance journey in a car in 1888. 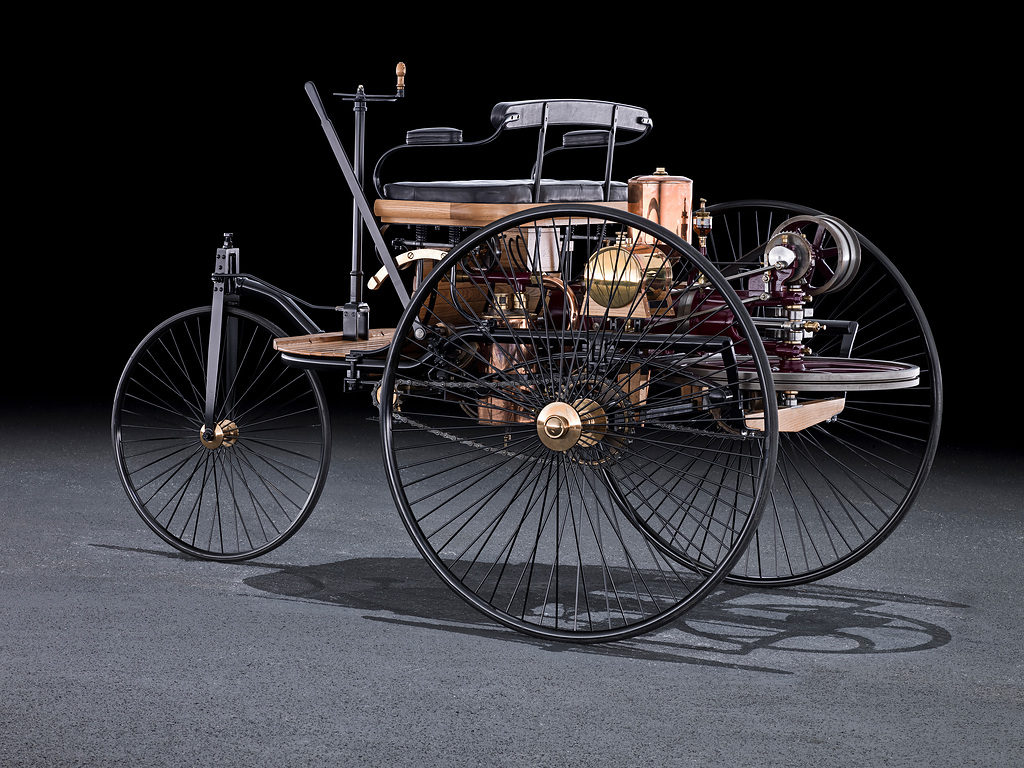 120 years ago, no car is faster or more successful: during the motor sport event “Nice Week” from 4 to 11 April 1902, the Mercedes-Simplex 40 hp proves far superior to the competition. In the Nice-La Turbie hill climb, vehicles of this model take the first three places. Englishman E. T. Stead sets a new course record with an average of 55.2 km/h, followed by Albert “Georges” Lemaître and Wilhelm Werner in second and third place. Another triumph: in the mile race, Henri Degrais achieves 83.2 km/h for the mile with a standing start and sets a new world record. The engine of the 40 hp has a displacement of 6,785 cubic centimetres. The two bottom-mounted camshafts are fully enclosed. For efficient cooling of the engine, which is completely covered at the bottom, the flywheel is also designed as a fan wheel and, with its suction effect, amplifies the airstream flowing through the cooler. Band brakes act on the drive shafts of the sprockets and achieve the effectiveness of differential locks at the same time through targeted individual actuation for right and left. The four brakes have water cooling that drips from a supply tank onto the friction surfaces during deceleration. The total weight of the Mercedes-Simplex 40 hp is around 1,000 kilograms. The racing car is also successful in numerous other competitions. And in the Ostend kilometre race in July, Baron Pierre de Caters achieves a top speed of 120.8 km/h with it. 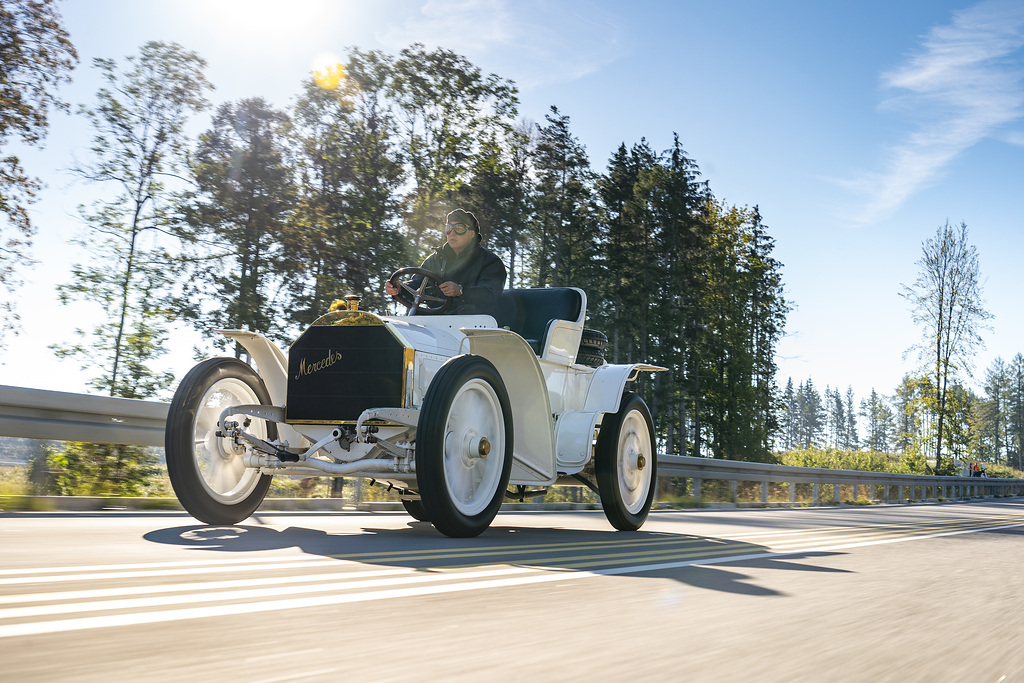 The victory of the Mercedes-Benz SSKL with streamlined body at the International Avus race in Berlin on 22 May 1932 permanently changed the design principles for racing cars. Because this vehicle impressively illustrates the possibilities of outstanding aerodynamics to the world’s public. The unique specimen carries an aerodynamic body on an SSKL chassis that covers the entire frame including underbody. The design is by aerodynamics specialist Baron Reinhard von Koenig-Fachsenfeld and is made of light alloy. The 221 kW (300 hp) racing car reaches a top speed of 230 km/h – that’s 20 km/h more than a normal SSKL. Spectators in Berlin nickname the unusual racing car the “Gurke” (cucumber). Radio reporter Paul Laven, on the other hand, calls this SSKL at the Avus Race a “silver arrow”. The 26-year-old Manfred von Brauchitsch relegates the established star driver Rudolf Caracciola (Alfa Romeo) to second place – and enables the newcomer to turn professional. Von Brauchitsch became an acclaimed star at the wheel of Mercedes-Benz Silver Arrows. In 2019, the anniversary year “125 Years of Motorsport”, Mercedes-Benz Classic reconstructs the streamlined SSKL racing car with a high degree of authenticity. Body, chassis, engine: everything is created within this elaborate project as closely as possible to the original. 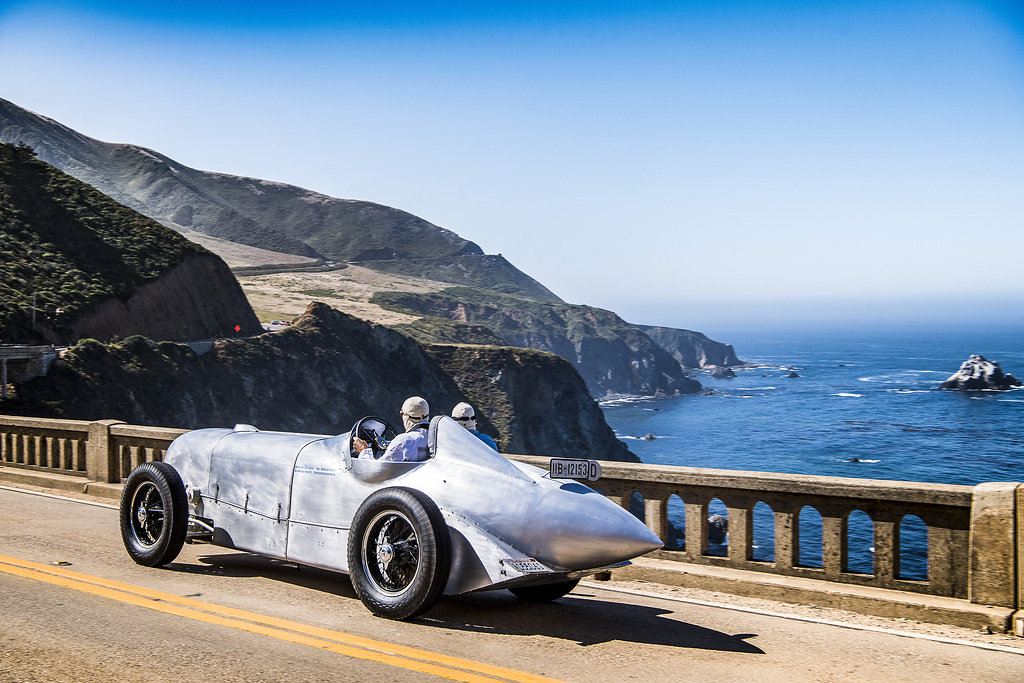 Mercedes-Benz re-entered motor racing in 1952 with the 300 SL (W 194). The limited resources initially spoke against the development of a racing car for Formula One in 1952, because new regulations had already been announced for the 1954 season. Axles, transmission and engine of the new racing car were developed from components stemming from the Mercedes-Benz 300 (W 186) representation vehicle. A brand new feature is an extremely lightweight, yet very torsionally stiff tubular frame, which is enclosed by a streamlined light-alloy body. As a result of the elevated tubular frame around the doors, the racing car was equipped with characteristic gullwing doors which were hinged on the roof. In 1952, the 300 SL was successful from the outset: amongst its major racing victories were the one-two-three victory at the Grand Prix of Bern (Switzerland), spectacular one-two finishes at the 24 Hours of Le Mans (France) and at the Carrera Panamericana in Mexico as well as the top four positions in the Nürburgring Jubilee Grand Prix. The original 300 SL racing sports car with chassis number 5 presented at the Classic Days was entered by the brand 70 years ago in the Carrera Panamericana (Hermann Lang/Erwin Grupp, among others): second place in the double victory behind Karl Kling/Hans Klenk) and in the Mille Miglia (Rudolf Caracciola/Peter Kurrle: they finished in 4th place behind Karl Kling/Hans Klenk in 2nd place). 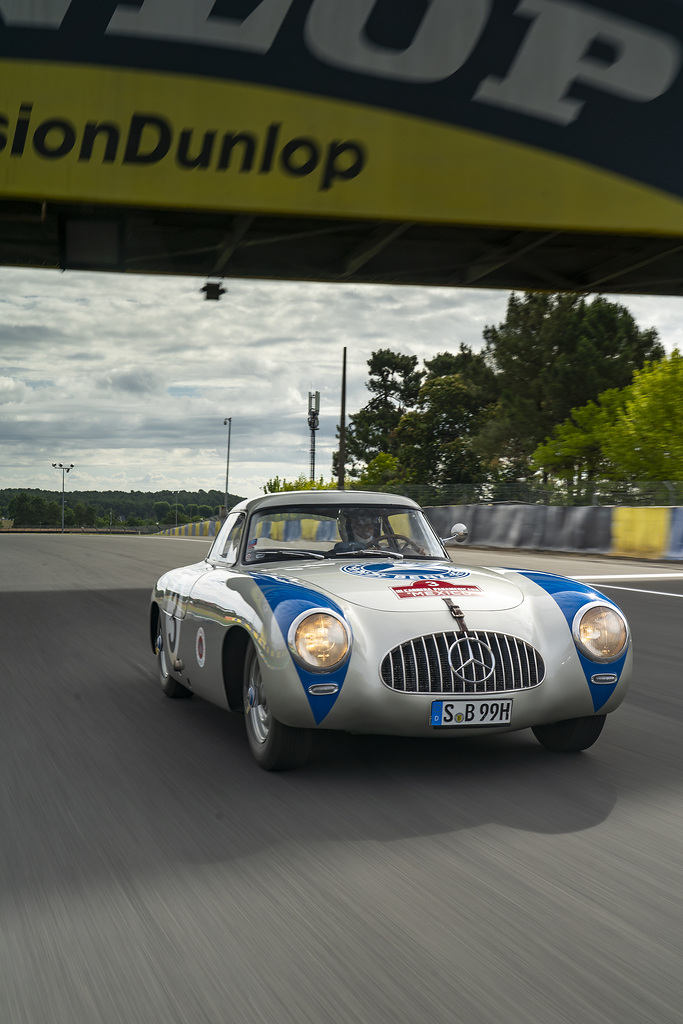 The Vision Mercedes Simplex, 2019
Use: Static

The “Vision Mercedes Simplex” reinterprets the historic Mercedes Simplex as a two-seater with free-standing wheels, alternative drive, fascinating user interface and modern design. Its dominantly horizontally aligned vehicle body sits as a monocoque in the middle of the four large wheels. The consistent vertical colour separation into a white front car and a black rear car follows the historical model. Transparent wheel trims reflect lightness and efficiency, as do the aerodynamic guiding surfaces between the front wheels and the vehicle’s body. The entire sculpture lives from the interplay of clearly and powerfully drawn surfaces and precise technical details. “Only a brand that is as strong as Mercedes-Benz is capable of the physical symbiosis of history and future. The ‘Vision Mercedes Simplexʼ symbolises the transformation of Mercedes-Benz’s brand-specific luxury,” says Chief Design Officer Gorden Wagener of the design in 2019. 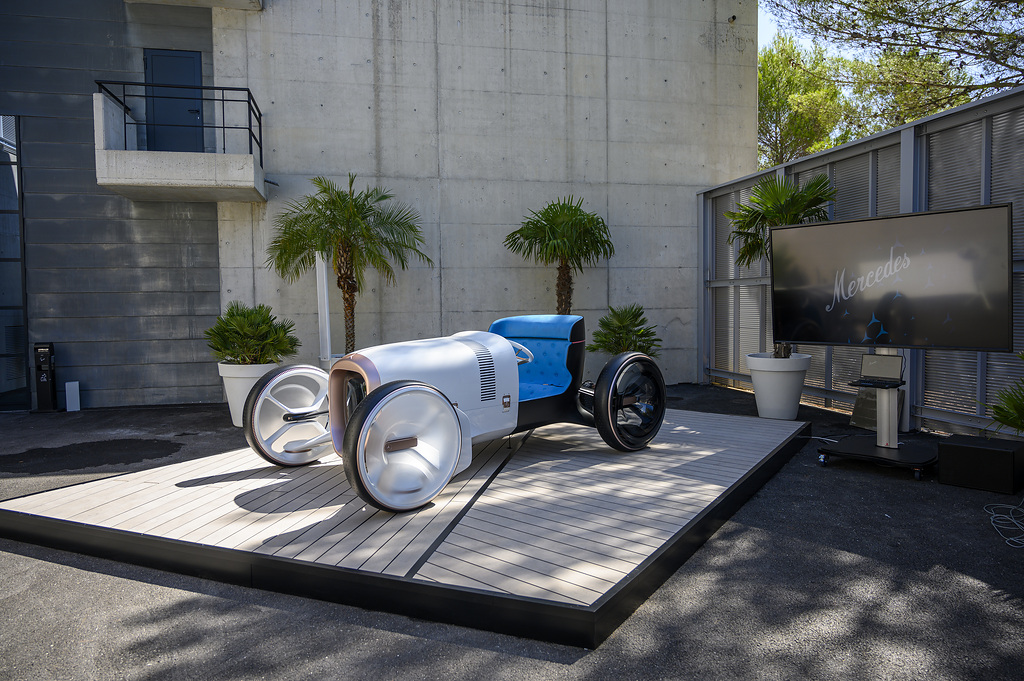 The Mercedes Simplex Vision. Photo from the Design Essentials III in Nice 2019. 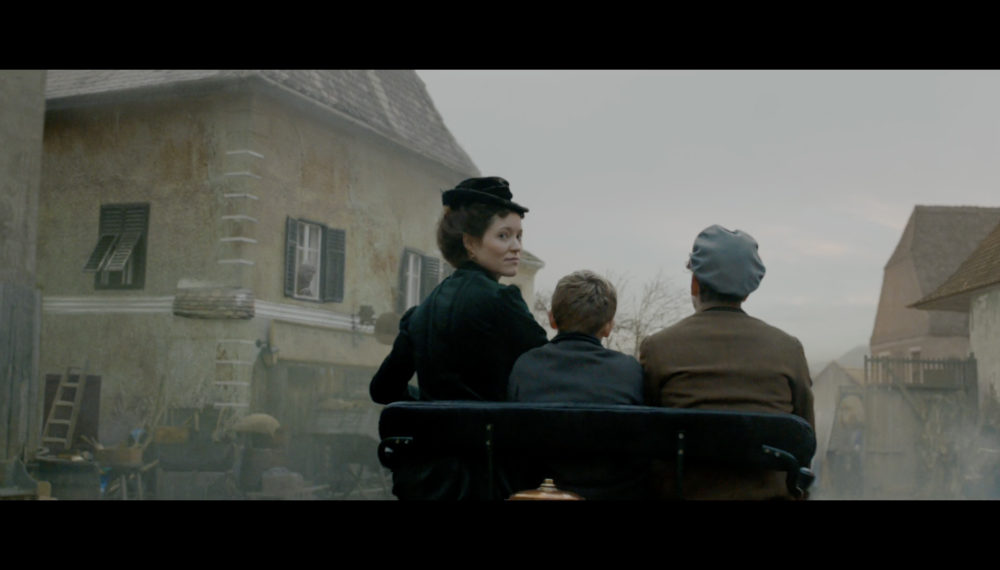 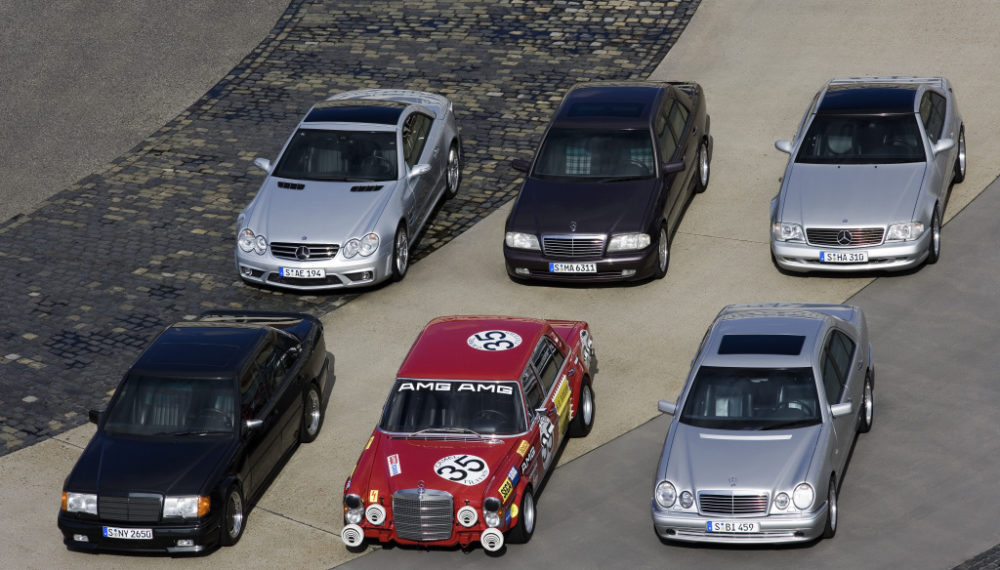