Mercedes-Benz History: The Route to the Riding Car

Gottlieb Daimler and his ingenious colleague Wilhelm Maybach moved to Cannstatt near Stuttgart in 1882. Differences between the fifty-year-old Nikolaus August Otto and Daimler, two years his junior, had led to the latter’s departure from the Gasmotorenfabrik Deutz on the outskirts of Cologne. Now a wealthy man Daimler, could afford to make himself independent.

For 75,000 Goldmarks he bought a villa in Taubenheimstrasse in Cannstatt and moved there with his wife Emma and five children in June 1882. The property was ideal for his purposes: not only was it directly next to the spa facilities Daimler regularly visited for treatment for his weak heart, but it also benefited from a large garden and spacious summer house. He had an extension added to the latter, and installed a gas and water supply – his test workshop was ready.

In early October, Maybach also arrived in Cannstatt. He moved into a nearby property and initially converted one room of his apartment into a design office. Here he kept the drawing board on which he turned Daimler’s ideas into technical drafts: Maybach was skilled at giving them a functional form – and Daimler knew the value of his technician. When the two men agreed a contract even before leaving Deutz, Maybach was guaranteed substantial remuneration.

The goal shared by the two men was to develop a small, lightweight high-speed engine that was above all suitable for powering a vehicle. They were not alone, however. All around the world others were working on the same idea.

In 1885, the so-called riding car was built in Gottlieb Daimler's workshop as a test unit to prove the suitability of Daimler's and Wilhelm Maybach's gas or petroleum engine for everyday use.

Without knowing of each other’s work, Daimler and Benz had by this time already come to a common starting point: they both opted for petrol as the fuel for their engines and they would be the first to realise their efforts. The decision to use this fuel, which had excellent combustion characteristics, was fundamental to their internal combustion engines for vehicles.

A second stumbling block in engine technology was the ignition system. This was so slow in conventional stationary engines of the day that it restricted maximum engine speed and therefore engine output, since the ignition processes could not be repeated quickly enough. Maybach dedicated himself to this problem, working his way through innumerable patent documents until he finally came across the Englishman Watson’s uncontrolled hot-tube ignition system, which proved suitable for the high engine speeds they aspired to. The hot-tube ignition system devised by Maybach guaranteed steady ignition.

Daimler was to apply the hot-tube ignition system to his engines until 1898. They worked on a simple principle: a tube, heated from the outside, protruded into the cylinder at about the position occupied by the spark plug today. When compressed by the piston in the cylinder, the fuel mixture was pushed against the hot tube and ignited spontaneously.

In a legal document, written to counter an invalidity suit lodged against his hot-tube ignition patent, Daimler described the problems associated with this invention: “It was a lengthy process, requiring endless experimentation and the unstinting and dedicated efforts of the practised and experienced engineer. And this despite initially wholly discouraging results in experimenting with free ignition, and with the many and frequent ‘premature igniters’, which during the drive and compression phases, before dead centre was reached, suddenly and unexpectedly kicked the flywheel backwards instead of driving it forwards, wrenching the crank from the hand of the experimenter with the force of an electric shock, and thus making the practicability of uncontrolled self-ignition seem unachievable; but nevertheless by refusing to give in and through stubborn experimentation, as well as modifications to the shape and dimensions of the combustion chamber and changes to the mixture charge etc. I achieved acceptable and ultimately excellent results and thus confirmation of the feasibility of my uncontrolled ignition system.”

In 1885, the so-called riding car was built in Gottlieb Daimler's workshop as a test unit to prove the suitability of Daimler's and Wilhelm Maybach's gas or petroleum engine for everyday use.

Once this hurdle had been overcome, it was time to find the prototype engine’s correct right method of operation. From their work at the Gasmotorenfabrik Deutz, both men were very familiar with the four-stroke principle. They opted for this, presumably knowing that Otto’s four-stroke patent DRP 532 was still valid, even though it was coupled with Otto’s layer-by-layer charging of the cylinder and a slow combustion of the gas mixture. In the patent specification for DRP No. 28022, awarded on 16 December 1883, Daimler therefore justified his application for a “Gas engine with hot-tube ignition” for uncooled and heat-insulated engine with uncontrolled hot-tube ignition by focusing on its explosive and rapid combustion. The patent was a masterpiece in the art of wording, since strictly speaking it was the same as Otto’s four-stroke principle and would subsequently become the object of bitter patent lawsuits. But Daimler’s claim was upheld. On 23 December 1883 he was granted German Patent No.

DRP 28243 for the “Regulation of engine speed by controlling the exhaust valve”, another important invention for the efficient operation of the internal combustion engine.

Birth of the first prototype engine in 1883

In the second half of 1883 Daimler and Maybach then built the first prototype engine, a horizontal four-stroke single-cylinder unit. Thanks to the hot-tube ignition and curved groove control operating the exhaust valve, from a displacement of approximately

100 cubic centimetres it developed an output of around 0.18 kW at 600 rpm, considerably higher than the previous peak engine speeds of 180 rpm achieved by a four-stroke gas engine. The intake valve, known as a “snifting valve” opened and closed automatically with the aid of vacuum pressure . The engine block was specially cast at the Kurz bell foundry in Stuttgart, where it was recorded in the order books as a “small model engine”. The company delivered it on 15 August 1883.

On account of its revolutions per minute the engine was termed “high-speed”. The various inventions that followed over the next few years were aimed at increasing engine speed – the logical way to further improving output. Even then, however, consideration was given to efficiency in order to maximise running time of the engine using available fuel reserves in the tank.

The next version of the prototype engine was unveiled in 1884. This time it was a vertical four-stroke single-cylinder unit, dubbed the “grandfather clock” on account of its appearance. It was registered for patent on 3 April 1885 (DRP No. 34926). It was specifically designed for low weight and compactness to fulfil the condition that it was suitable for installation in vehicles. Initial output was 0.74 kW. The design was innovative also in that the transmission components and flywheel were enclosed in an oil and dust-tight crankcase. The engine also featured for the first time the “floating” carburettor – better known today as the surface carburettor – developed by Maybach, which enabled problem-free combustion of petrol. This floating carburettor ensured a constant volume of fuel; since the air was fed through a constantly high fuel layer it was possible to achieve a constant fuel-air mix – a crucial and fundamental invention for regular engine operation.

The patent specifications included a sub-clause which was remarkable in its foresight: “An atomising pump may be used in the place of the vaporising device” – a concept that later gave rise to the injection pump.

The first test vehicle for the “grandfather clock” was the riding car of 1885. A two-wheeled vehicle, this closely resembled the bicycle – this too was a relatively recent invention and still considered state-of-the-art. But for stability reasons Daimler opted for wood as the material for his frame. The engine was mounted beneath the driving seat in 1885. From a displacement of 265 cubic centimetres it developed an output of 0.4 kW at 600 rpm. Power was transmitted from the engine belt pulley via a drive belt to the rear wheels. Two speeds were possible – 6 or 12 km/h – depending on the belt pulley selected at standstill.

Replica of the Daimler riding car of 1885 in the spa gardens of Bad Cannstatt. The riding car is the world's first motorbike. Gottlieb Daimler applied for the patent on 29 August 1885.

The engine even incorporated a consistent approach to the principles of lightweight design, as one detail in particular demonstrated: Maybach’s cylinder design was not attached by means of a flange, instead the lower part of the cylinder was reinforced slightly and equipped with a fine screw thread. Around fifty years later this design was revisited when engineers were seeking a light and secure method for fitting aero engine cylinders.

A contemporary publication described the operation of the riding car: “To start the engine one must first light the small flame beneath the hot ignition tube and crank the engine once using the crank; these preparations take only a minute. The engine runs smoothly, since a silencer dampens exhaust gases entering the exhaust pipe. To set the vehicle in motion, the driver climbs aboard, takes hold of the steering bar and connects the engine to the bicycle. This is done by means of the lever, cord and tension pulley, which shifts the drive belt onto the pulley. The belt pulleys serve to vary the speed; with the drive belt set in the upper position the vehicle moves slowly, in the lower position one can move more quickly. The brake is pulled by means of a cord which is within easy reach of the driver; to bring the cycle to a standstill, one simply turns off the drive belt by means of a lever located between the seat and the steering wheel and all movement ceases.”

The riding car was the most important precursor to individual mobility achieved through the internal combustion engine. For one thing, it demonstrated the potential of the engine created by Daimler and Maybach to power a vehicle. But it also documented the fact that a human being could maintain full control of this engine for purposes of individual mobility. Subsequent automobiles would then develop this concept to a high level of maturity.

In November 1885 Gottlieb Daimler’s son Adolf successfully drove this unsprung, iron-wheeled “riding car” along the three-kilometre stretch between Cannstatt and Untertürkheim and back. Given the conditions of roads at the time, it could hardly have been a comfortable journey – nevertheless the world’s first “automobile” passed the test. For Daimler and Maybach it was merely a step on the way to inventing the motor car, which followed in 1886 in the form of the motor carriage – along with the Patent Motor Car of Carl Benz. The successes of the two inventors would go down as great moments in history. 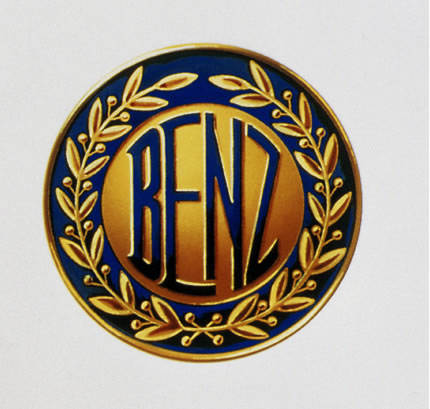 The True Story Behind the Mercedes-Benz Three-Pointed Star