The combination of tradition and modernity embodied in the Maybach Landaulet study, makes this a truly unique vehicle of its time. The highly unusual body shape already defines the car as something quite out of the ordinary. But the unique combination of the fold-back roof at the rear and a solid roof section over the front seats also reflects the fine appreciation of tradition and values that is the hallmark of the Mercedes-Benz Cars approach.

The body of the landaulet harks back to the early days of automotive history. Just a few years after the invention of the automobile by Gottlieb Daimler and Carl Benz in 1886 – working independently of each other – both companies had large numbers of landaulets on the roads. The Mercedes-Benz brand created in 1926 took up the idea, and over the years landaulets based on a range of model were built, both in normal production plants and by prestigious bodybuilders. The last landaulet variant available as a production car was the 600 model (W 100 series) from 1965 until 1981. The company’s in-house special vehicle manufacturing workshops also built three different landaulets for the Vatican in the second half of the 20th century.

The landaulet is one of the true aristocrats among special body designs, and indeed its origins go back to the days of the coachbuilder’s art. Its hallmark is a “rigid, closed passenger compartment with a folding convertible top,” according to the Mercedes-Benz definition. What this means in practice is a folding convertible top over the rear seats, adjacent to a rigid top or solid partition. Depending on the variant, the driver might be out in the open, or – as is usual in today’s bodies of this type – in his own compartment, after the style of a limousine.

In any event, the choice between closed or open-top travel is only available to the passengers in the rear. The qualities of the landaulet as the perfect car for public figures are most evident when the opulent roof is swung back, focusing every eye on the occupants in the rear, and converting the landaulet into a stylish and elegant platform for public appearances. This is why vehicles with this unique body design are used almost exclusively by dignitaries and VIPs. And of course the roof can always be closed again, as protection from the weather or prying glances.

The Maybach Landaulet study was created in response to requests from Maybach customers who still feel the thrill of landaulet vehicles from the days of sumptuously equipped coaches driving through the streets. The car is based on the Maybach 62 S. The C-pillars and roof arches remain in place when the top is pushed back, retaining the luxury limousine’s distinctive silhouette, along with the generously-dimensioned doors, stylish interior compartment and seating arrangements.

When the roof is closed, the convertible top is stretched over the roof frame, providing a tight seal against wind and weather. On the instruction to open the passenger compartment, the driver merely has to press a control on the center console, and the structure, together with the rear window, folds gently down onto the parcel shelf, without any significant loss of stowage space. The opening and closing of the convertible top is an efficient but unhurried process, like a smoothly choreographed dance, taking around 20 seconds to complete. The luggage compartment remains easily accessible even with the roof open. And the driver can cover the retracted top with a stylish leather tarpaulin, concealing the mechanism and restoring the smooth and elegant contours of the vehicle.

In the 1930s there were landaulet versions of several Maybach luxury limousines. In line with normal practice at the time, the body fitted to the chassis could be designed according to the owner’s individual requirements. The most popular models with landaulet customers were the twelve-cylinder Maybach 12, Maybach Zeppelin DS7 and Maybach Zeppelin DS8. The combination of letters and numerals used for the Zeppelin models stood for the V12 engine (double-six, = DS) and the displacement. The Zeppelin DS7, built in 1930 and 1931, had a 150 hp (110 kW) engine with displacement of 6922 cubic centimeters, while its successor, produced from 1931 to 1939, generated 200 hp (147 kW) from a 7922 cubic centimeter engine.

Nor was the circle of Maybach landaulet aficionados restricted to statesmen and captains of industry. There were others for whom maintaining a high public profile was a business necessity, and an automobile that could put its occupants on show like jewels in a display case simply by folding the roof back was clearly ideal for the purpose. For example, in 1930 the Sembach-Krone family commissioned the Erdmann & Rossi bodybuilders’ firm to build a Zeppelin DS7, specifying a burgundy-colored landaulet body, as a management vehicle for the legendary Krone circus. This elegant car with its long folding top is now on show at the Sinsheim Auto and Technology Museum.

Also featured in the Sinsheim collection is a 1938 landaulet version of the Zeppelin DS8 with a top speed of 160 km/h. This body, with a short folding top, was made by Hermann Spohn in Ravensburg. Spohn was the regular bodybuilder for Maybach, located just twenty kilometers away in Friedrichshafen.

The body form of the landaulet, or “half-landau” as it is sometimes known, owes much to the construction of horse-drawn coaches. The landau (or sometimes “Landauer” in German) was an open coach, probably named after the town of Landau in the Palatinate region of Germany. The passengers sat facing each other, and could be protected by two half-roof sections, pulled over them from either end of the vehicle when required. The coachman sat on a box seat, well away from the passenger compartment. The landaulet structure differed in that it only had the rear half-roof covering. And depending on the design, the driver’s compartment in front of the passenger seats could have a rigid roof, a glass top or a front windshield.

At the end of the 19th century the customary distinction in coach construction between the landau and landaulet was carried over into automotive design, with Daimler and Benz both initially making cars with landaulet and landau bodies.

Glory days of the landaulet

But events were to prove that only the landaulet had a viable future in the age of the automobile. One of the reasons was clearly that as speeds increased, passengers became more reluctant to sit with their backs to the direction of travel. The landaulet design emerged as the accepted form, and became increasingly popular with customers. But during the heyday of landaulet bodywork in the first half of the 20th century there was still no consistent or standard design.

One of the major points of difference was in the area of the driver’s seat. The box-seat of the Daimler belt-driven landaulet of 1896 for use as a taxi left the driver completely unprotected. In comparison, a 25/45 hp Benz landaulet from 1910 offered the driver a windshield and a rigid roof, but no doors or side windows. Side doors – but still no windows – were added in the 8/20 hp Benz of 1912.

Subsequent landaulet models reversed the principle of leaving the chauffeur out in the open – the driver was now protected by a windshield on all sides, as in a limousine, but the folding convertible top over the rear seats continued to offer flexibility for the passengers. This more contemporary form of the landaulet was used in luxury models such as the 15/70/100 hp Mercedes-Benz 400 Pullman landaulet from the late 1920s, and also in the landaulet taxicabs based on the Mercedes-Benz 260 D from 1936.

Landaulet as a taxicab

Al fresco motoring proved particularly attractive to taxicab customers – as indicated by the large numbers of taxicabs supplied with a landaulet body. In fact a landaulet became the world’s very first taxi when a Stuttgart-based haulage and taxicab operator, Friedrich August Greiner, ordered a Victoria landaulet with a taximeter from Daimler-Motoren-Gesellschaft (DMG) under order no. 1329. The vehicle was duly delivered in May 1897, and the world’s first motorized taxi went into service in June, once the required permit had been obtained from the police. The vehicle cost its owner the small fortune of 5530 Mark. Included in that price were the landaulet half-convertible top, two dash leather coverings, reverse gear and solid rubber tires.

In the following decades both Daimler and Benz, and from 1926 Mercedes-Benz, supplied taxis based on this distinctive body design. The 12/30 hp Benz was actually marketed from 1913 to 1914 solely as a taxicab landaulet. In this period the landaulet became just as popular with taxi passengers as with VIPs. However the design was never in high demand for private automobiles for everyday use. In his reference work entitled “The modern automobile and its maintenance and repair” and published in 1921, Max Peter wrote: “The advantages of open-top and closed-top vehicles are to some extent combined in the landaulet which can be driven as either. Because of the ability to adapt the body structure according to the season, this body design is associated above all with taxi automobiles, and probably for this reason it is less popular for private cars, notwithstanding its undeniable advantages.” This quote is taken from the section dealing mainly with taxis and private cars of the traditional kind. The “elegant landaulet”, in contrast, is classified under a separate category specifically for parade cars.

Evolution of an elite body design

The folding convertible top design as a luxury variation on the automobile was discussed by authors Ernst Misol and Hermann Klaiber in 1913 in their book entitled “What do I need to know about my car, and how should I drive it to comply with the authorities’ regulations?” Misol and Klaiber emphasized the advantages of different body styles for different purposes: “A luxury car used only in city traffic should always have a fully enclosed body, i.e. the limousine design. But for shorter journeys outside city limits, preference is to be given to the landaulet with its retractable top at the rear.”

Owners of luxury landaulet cars in the pre-World War I period included Emperor Wilhelm II. The emperor’s first vehicle of this type was a 39/75 hp Mercedes chain-driven landaulet, which he used as a traveling car. This was followed in 1911 by a 38/70 hp Mercedes landaulet for the same purpose. The emperor then chose a 28/60 hp Mercedes landaulet as a city car in 1913. And during a visit by the heir to the Romanian throne in 1913, the monarch and his guest were driven through the streets in a 26/65 hp Mercedes-Knight landaulet.

Following the end of the imperial era, in 1938 Mercedes-Benz presented Paul von Hindenburg with a 12/55 hp Mercedes-Benz 300 six-seater landaulet: Hindenburg had been elected as President of the Weimar Republic in 1925, as the successor to Friedrich Ebert. 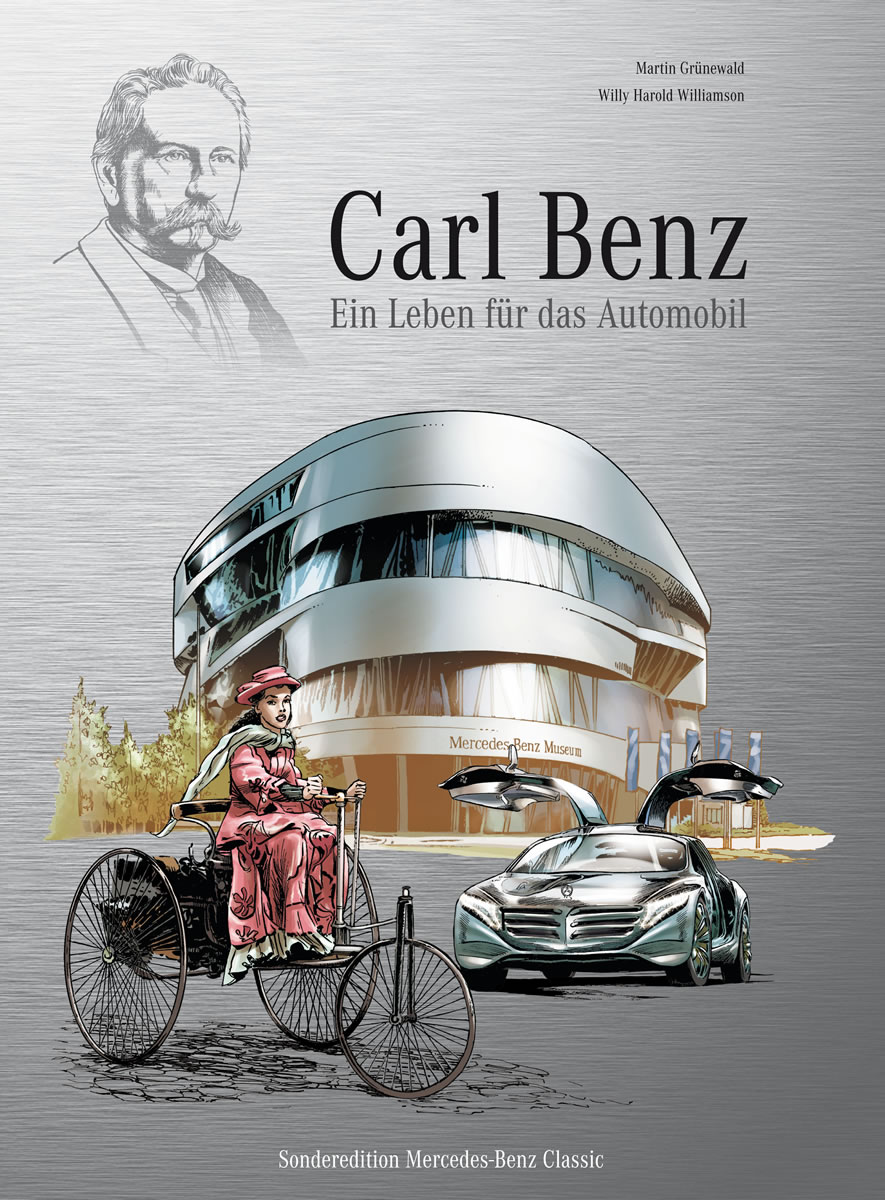