The very first comic book, titled “Carl Benz – A life dedicated to cars”, covers how the car was invented in colorful images how the car was invented as well as providing an insight into the fascinating life of car creator, Carl Benz. The comic book, by Belgian artist Willy Harold Williamson and author Martin Grünewald, is published by Sadifa Media and will be available from February 9, 2013 in the Mercedes-Benz Museum shop.

“There can be few more entertaining ways of conveying the stories both of the automobile and of the origins of our company”, commented Michael Bock, Head of Mercedes-Benz Classic. “The historical accuracy of these wonderful drawings is impressive, while the speech bubbles really get to the heart of the story. Every little technical detail on the Benz Patent Motor Car is precisely drawn; and Carl and Bertha are immediately recognisable”. 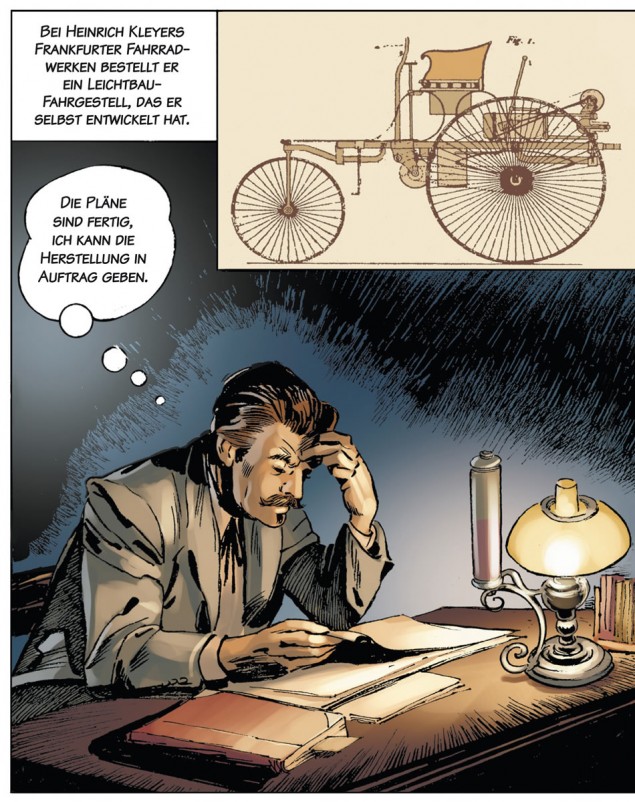 On over 52 beautifully laid out pages, the comic book illustrates the most important milestones in the life of Carl Benz, beginning with his birth on November 25, 1844. Its memorable images tell of the many hurdles and vicissitudes faced over the course of his life by Carl Benz, the man who would determine the birthday of the automobile when he registered the patent for his three-wheeler motor car on January 29, 1886. At his side: his wife Bertha Benz. Her legendary first long-distance drive from Mannheim to Pforzheim with her sons Eugen and Richard, 125 years ago, is very persuasively shown in comic-strip form. The inventions and developments being undertaken at around the same time by those other automotive pioneers, Gottlieb Daimler and Wilhelm Maybach, in Cannstatt, are also covered.

The comic-book story is based on proven facts. The Mercedes-Benz Classic Archive helped the internationally renowned comic-strip artist Willy Harold Williamson and author Martin Grünewald with their detailed research work. As far as possible, all the historical scenes illustrated are derived from documented facts. The dialogue in the comic aims for the same level of verisimilitude, even if no record of actual details remains. 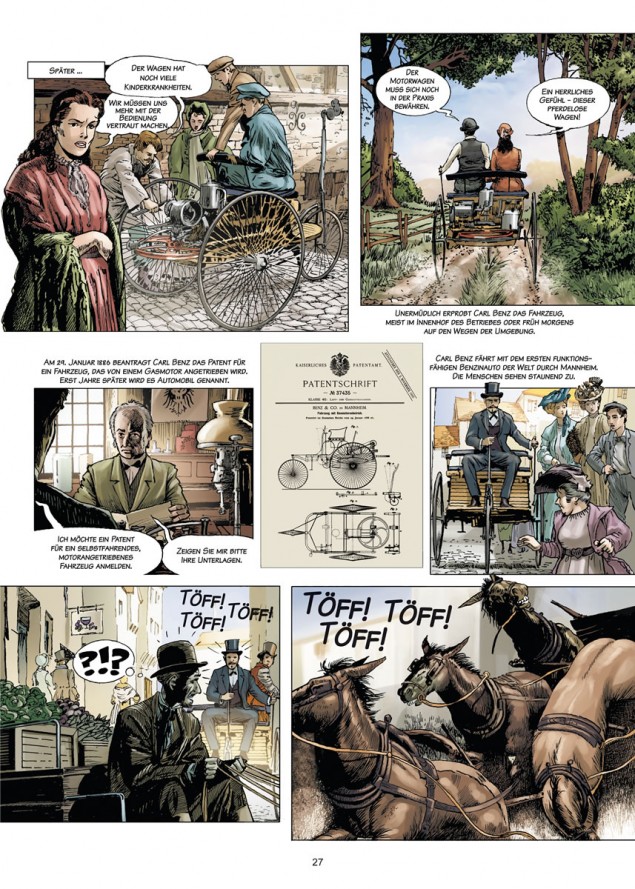 In order to achieve an impression of depth with three-dimensional effect, the colour in each individual drawing was applied by an experienced colourist in three separate layers. This very complex form of illustration allows the reader much more intensive enjoyment of the storyline. The high-quality hardback volume is published by Sadifa Media, specialists in historical comics for over 25 years.

The comic book “Carl Benz – A life dedicated to the car” will be available from February 9, 2013 as a Mercedes-Benz Classic special edition in a specific cover, exclusively from the Mercedes-Benz Museum shop. The inside of the dust jacket is printed with a drawing from the comic, making it suitable for use as a poster.

The special edition is available at a price of 19.80 euros in four languages: German, English, French and Chinese. The comic may also be ordered online from the Classic Store at www.mercedes-benz-classic-store.com. Over the course of the coming year, the comic will then become available with a different cover from booksellers throughout Germany.