The Pebble Beach Tour d’Elegance celebrates the Mercedes-Benz SSKL streamlined racing car from 1932: it will be possible to experience this milestone in automotive history on the road for the first time at the drive for outstanding classics on Thursday, 15 August 2019. Mercedes-Benz Classic has spared no expense in having the vehicle reconstructed for the “125 Years of Motorsport” anniversary. Alongside the unique SSKL, an elegant Mercedes-Benz 320 n combination coupé (W 142) from 1938 will be taking part in the Pebble Beach Tour d’Elegance.

A dream car on a dream road: at 7 a.m., the participating vehicles line up on the Portola Road in Pebble Beach. From 9 a.m., the exclusive drive begins, leading to Carmel-by-the-Sea. The tour will arrive back at Pebble Beach by around 2 p.m. The Pebble Beach Tour d’Elegance partially follows the legendary 17 Mile Drive coastal route of the Californian peninsula of Monterey. 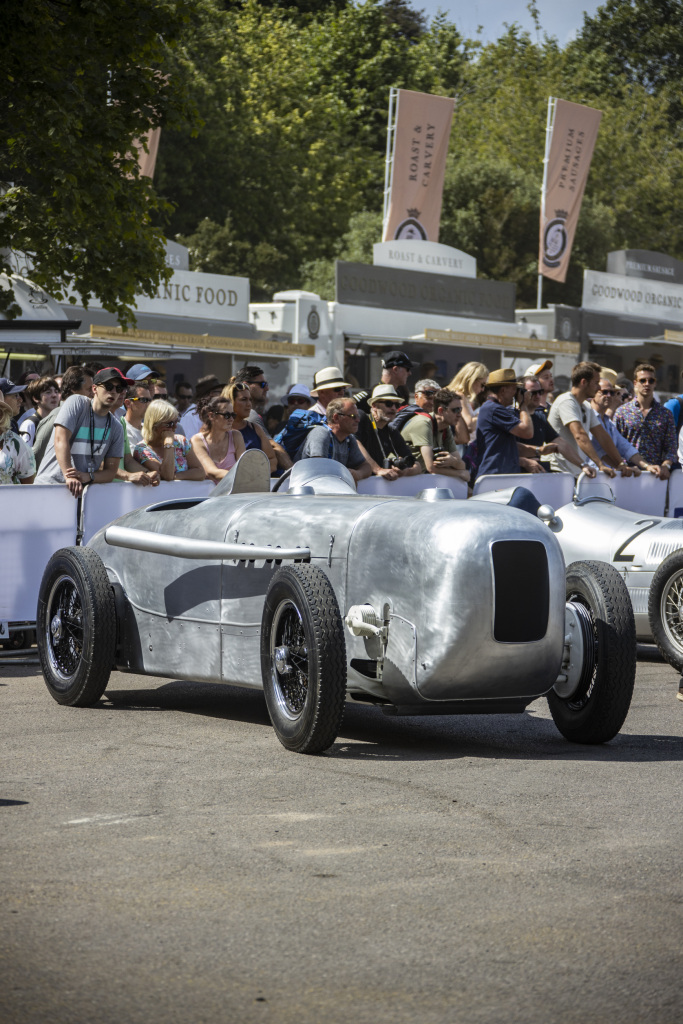 On 22 May 1932, Manfred von Brauchitsch won the Avus race in Berlin in a Mercedes-Benz SSKL with streamlined body and thereby set a class world record with an average speed of 194.4 km/h over a distance of 200 kilometres. In 2019, Mercedes-Benz Classic reconstructed the vehicle with a high level of historical authenticity. Photo from Goodwood Festival of Speed 2019.

With the Mercedes-Benz Star Lounge, the brand is presenting the topics of origin, luxury and “125 Years of Motorsport” at Pebble Beach from 15 to 18 August 2019, from 9 a.m. to 5 p.m. each day. The sportiness in the history of the oldest luxury car brand in the world is brought to life, from 1886 right into the future.

The central “Origins” exhibition area shows an authentic replica of the Benz Patent-Motorwagen – it stands for the birth of the car in 1886 from the spirit of innovation. The Mercedes-Simplex 40 hp from 1903 is a representative of the family of the first modern car in the world and a high-performance vehicle of its time. The current Mercedes-Benz EQC Edition 1886 (combined electrical consumption: 20.8 – 19.7 kWh/100 km; combined CO2emissions: 0 g/km*) – much like the Mercedes-Simplex almost 120 years before it – symbolises the beginning of a new era of mobility and carries the values and strengths of Mercedes-Benz on into the future.

The “Luxury” area stands for the tradition of the highest standards in equipment, comfort, performance and design. Here, the Mercedes-Benz Star Lounge bridges the gap from the current Mercedes-Maybach luxury top models to the Maybach DS 8 Cabriolet from 1932. The topic of automotive luxury as a theme of the Mercedes-Benz brand history reflects the spirit of the Pebble Beach Concours d’Elegance and its supporting programme over the entire Automotive Week.

The focus of the presence at Pebble Beach is the “125 Years of Motorsport” anniversary. One of the stars is, of course, the Mercedes-Benz SSKL streamlined racing car. On 15 August, spectators will experience its premiere on a public road. As an exhibition in the Star Lounge, the aerodynamically encased racing car also meets a Daimler two-cylinder V-engine, which represents the beginning of motorsport. Vehicles equipped with engines of this type won in the first car competition in history 125 years ago – the race from Paris to Rouen on 22 July 1894.

Further automotive contemporary witnesses from 125 Years of Motorsport in the Star Lounge include a Mercedes-Benz 3-litre W 154 Formula racing car from 1939, a Mercedes-Benz 300 SLR racing sports car (W 196 S) from 1955, a Sauber-Mercedes C 9 Group-C racing sports car from 1989 and the Penske-Mercedes PC-23 IndyCar from 1994. A comprehensive presentation of the latest high-performance vehicles by Mercedes-AMG perfectly rounds off the topic of sportiness.

Today, the Concours, in which around 200 exquisite cars from all around the world take part, is the conclusion and highlight of the Pebble Beach Automotive Week with its comprehensive programme. The actual competition with the presentation at the 18th hole of the Pebble Beach Golf Links takes place on Sunday 18 August 2019, from 10:30 a.m. to 5 p.m.

The top-class classic car event is an impressive stage for the driving premiere of the Mercedes-Benz SSKL Avus racing car at the Pebble Beach Tour d’Elegance. This spectacular vehicle, which will be subsequently presented in the Mercedes-Benz Star Lounge, connects the era of the mighty compressor racing sports cars of the 1920s and the epoch of the legendary Mercedes-Benz Silver Arrows of the 1930s.

The aerodynamics pioneer Reinhard von Koenig-Fachsenfeld (1899 to 1992) designed a trailblazing streamlined body for the powerful Mercedes-Benz SSKL compressor racing car in 1932. On 22 May 1932, Manfred von Brauchitsch entered the important international Avus race in Berlin with this vehicle which was unusual to spectators of the time (the public promptly dubbed it “gherkin”) and won ahead of Rudolf Caracciola in an Alfa Romeo.

Mercedes-Benz Classic has reconstructed the innovative “silver arrow”, as it was described in a radio report at the time, from 1932, with the highest level of authenticity. This includes the lightening holes in the chassis, typical of the SSKL, which were undertaken according to the original drawings. In total, the racing car weighs 125 kilograms less than the Mercedes-Benz SSK, which served as its basis. The complete reconstruction of the streamlined body according to historical documents was particularly laborious. For this purpose, the experts researched the archives of Mercedes-Benz Classic and those at Schloss Fachsenfeld, which the engineer and inventor Reinhard von Koenig-Fachsenfeld transferred to a foundation in 1982.

The victory of the Avus racing car in 1932 is one of the milestones in 125 Years of Motorsport at Mercedes-Benz. It was back then that the aerodynamic optimisation was established in motorsport. The brand is commemorating this at the Pebble Beach Concours d’Elegance with the driving premiere and presentation.

The V-twin engine Gottlieb Daimler and Wilhelm Maybach developed in 1888 formed the drivetrain of the “Daimler Motor-Quadricycle”, also known as the “Stahlradwagen” (steel-wheeled car), a vehicle showcased at the Paris Exhibition in 1889. In 1894, this engine also formed the basis for the origins of motorsport: at the Paris-Rouen race, the world’s first motorcar competition in July 1894, vehicles by Peugeot and Panhard & Levassor won first prize – and they repeated their success in June 1895 at the first “real” race from Paris to Bordeaux and back to Paris, which included speed ratings. The winning cars featured the V-twin engine designed by Daimler and Maybach, which was manufactured by Panhard & Levassor under licence. The engine installed in the Daimler “steel-wheeled car” originally had an output of 1.1 kW (1.5 hp) and an engine size of 565 cc. Later variants, such as those used in the first races, delivered up to 2.75 kW (3.75 hp) from engines up to 1,646 cc.

The Mercedes-Simplex 40 hp was launched in March 1902, superseding the legendary Mercedes 35 hp. The suffix “Simplex” was intended to indicate how easy the new model was to operate for its time. Its direct predecessor was the first to define the motorcar’s distinctive shape. Characteristic features included the long wheelbase, the light and powerful engine installed low down and the honeycomb radiator integrated organically into the front end, which was to become distinctive for the brand. The Mercedes 35 hp marked the end of the “horse-drawn carriage” style which had dominated the industry and it is thus considered to be the first modern car. The “Mercédès era” ushered in by this was characterised by a passion for innovation, visionary drive and technical creativity. There is a parallel here to today: Mercedes-Benz is now once again applying the same values to advance the future of mobility. Like the very first Mercedes, the EQC and future EQ models are fundamentally designed to make optimum use of an innovative drive concept – in this case, the electric drive. Delivered in 1903, the white example from the Mercedes-Benz Classic collection is one of the oldest, preserved vehicles bearing the Mercedes brand. It shows the future of the car as it was presented at the start of the 20th century.

The SSKL, of which only four were built in 1931, was a pure competition vehicle and signalled the crowning end of the development of the Mercedes-Benz S series (W 06) with types S, SS and SSK. Aerodynamics specialist Baron Reinhard von Koenig-Fachsenfeld designed a streamlined body for the SSKL to be driven by racing driver Manfred von Brauchitsch. The body was made of aluminium by Vetter in Cannstatt and mounted on von Brauchitsch’s car. At the Avus race in May 1932, the modification had an overwhelming effect: the streamlined Avus racing car had 25 per cent less drag than an SSKL with the classic body, giving it an increased top speed which was 20 km/h higher than usual. Manfred von Brauchitsch won the race in the futuristic looking car ahead of the previous year’s winner, Rudolf Caracciola. Mercedes-Benz Classic will present an authentic reconstruction of the car, the original of which no longer exists, to the public for the first time in 2019 at the Goodwood Festival of Speed.

Mercedes-Benz presented the 57 kW (78 hp) type 320 (W 142) in 1937. The comfortable and powerful six-cylinder model of the luxury class was built in two wheelbases and countless body variants – just like the type 290 (W 18) did before it, which it replaced. Mercedes-Benz only produced the shorter type 320 n with a 2,880 millimetre wheelbase for two years, whilst the type 320 with a 3,300 millimetre wheelbase was built until 1942 (with a 3.4-litre engine from 1939). The 320 n combination coupé presented itself as a sportily elegant version of the W 142 model series – just like the Cabriolet A which was also available. At its market launch it had a list price of 12,300 marks and was therefore around 3,300 marks more expensive than the saloon with a sliding sunroof. Back then, the term combination coupé described a cabriolet with a detachable hardtop. The vehicle from the Mercedes-Benz Classic collection, which is taking part in the Pebble Beach Tour d’Elegance, underlines the aspiration of automotive elegance with the two-colour paint finish in red and black. 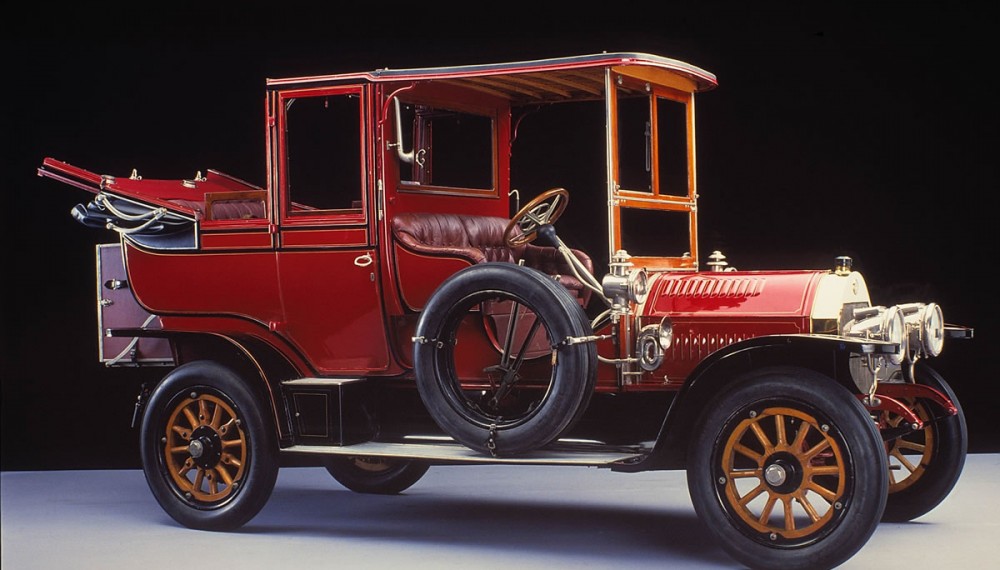 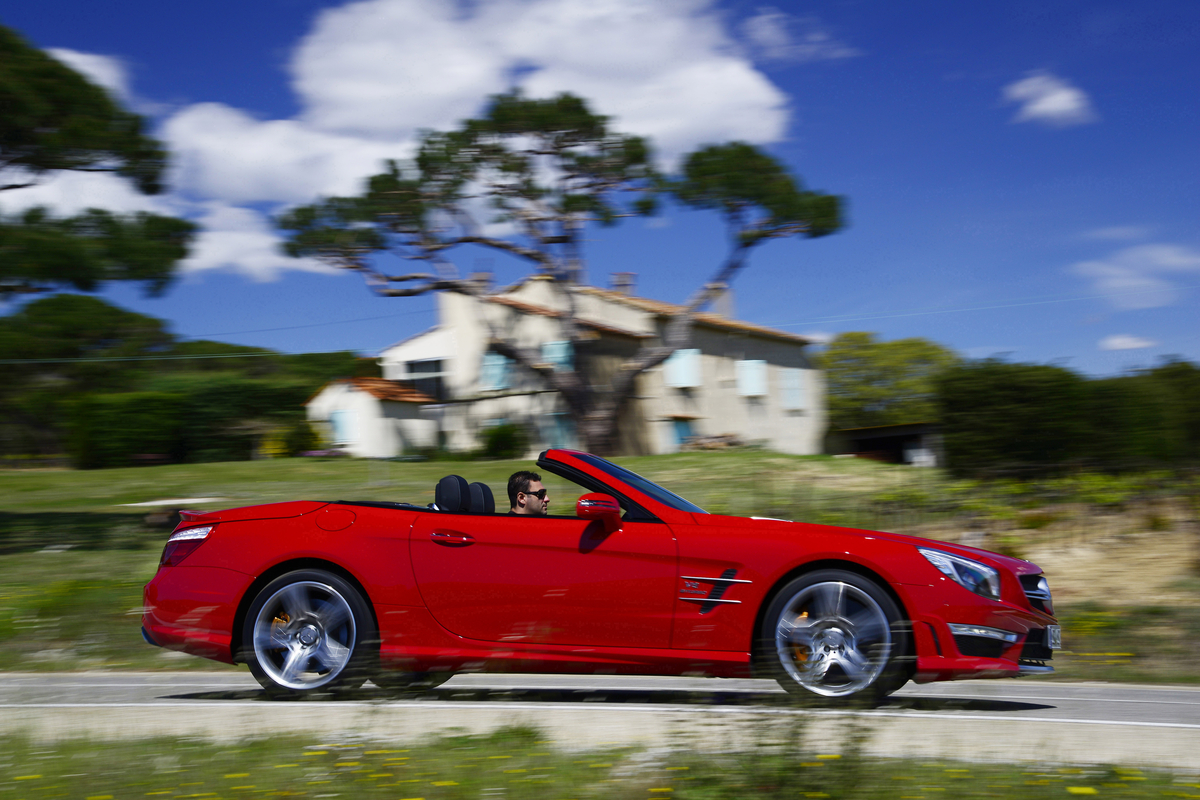