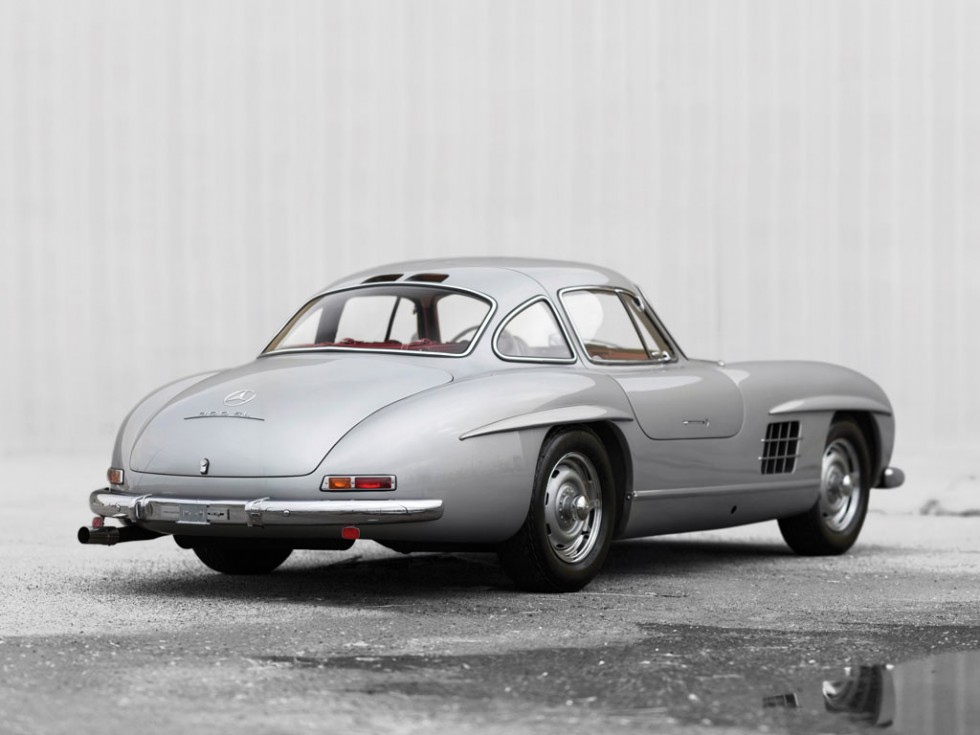 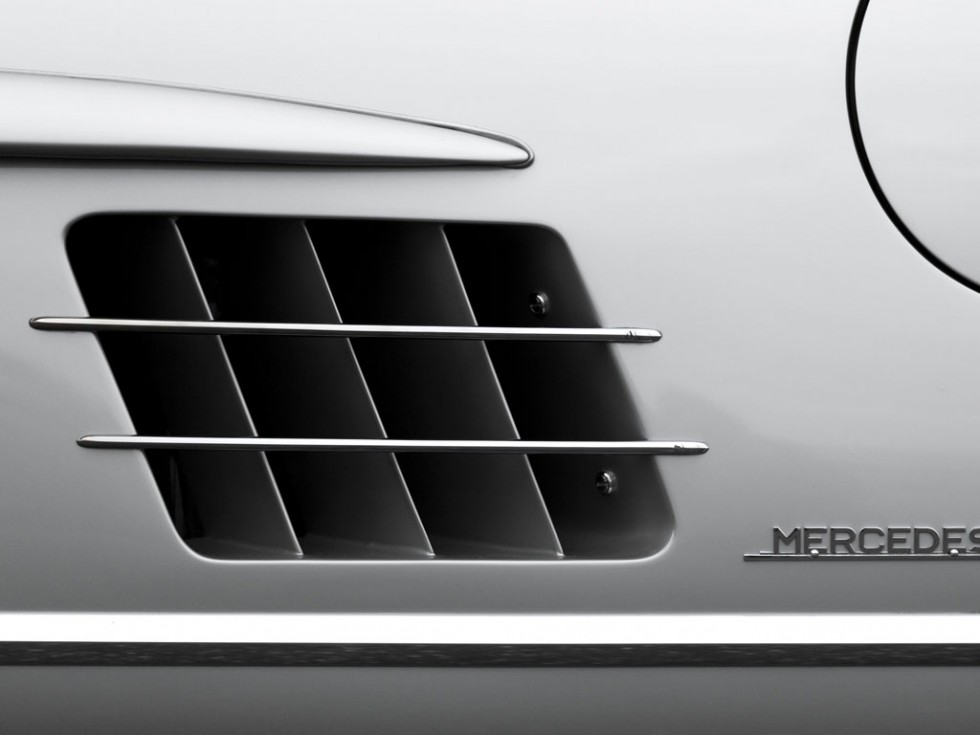 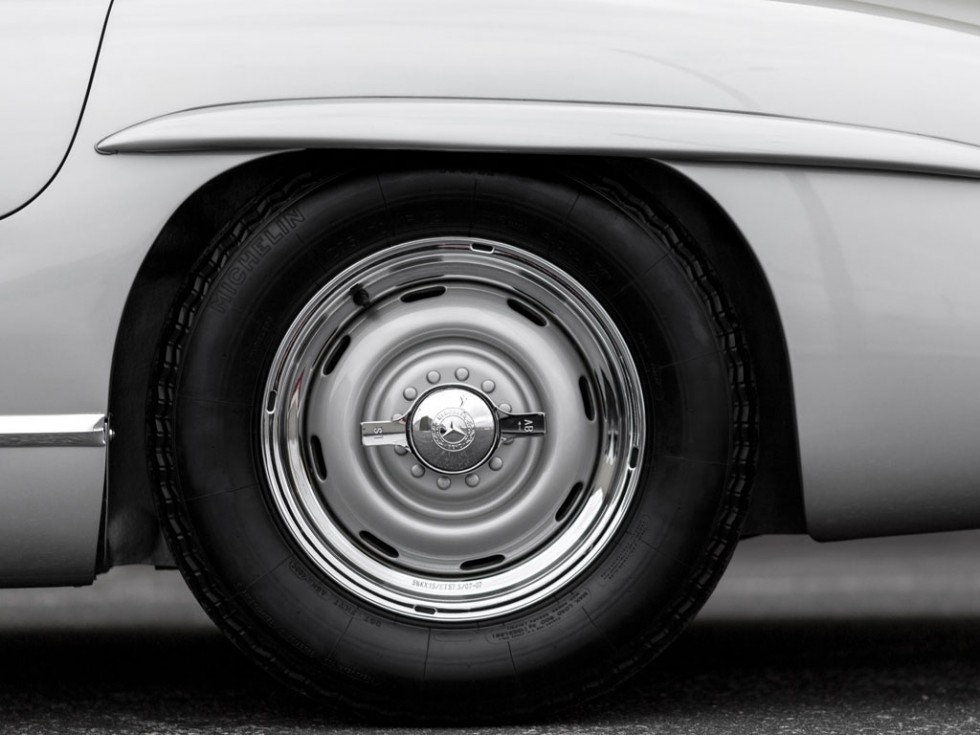 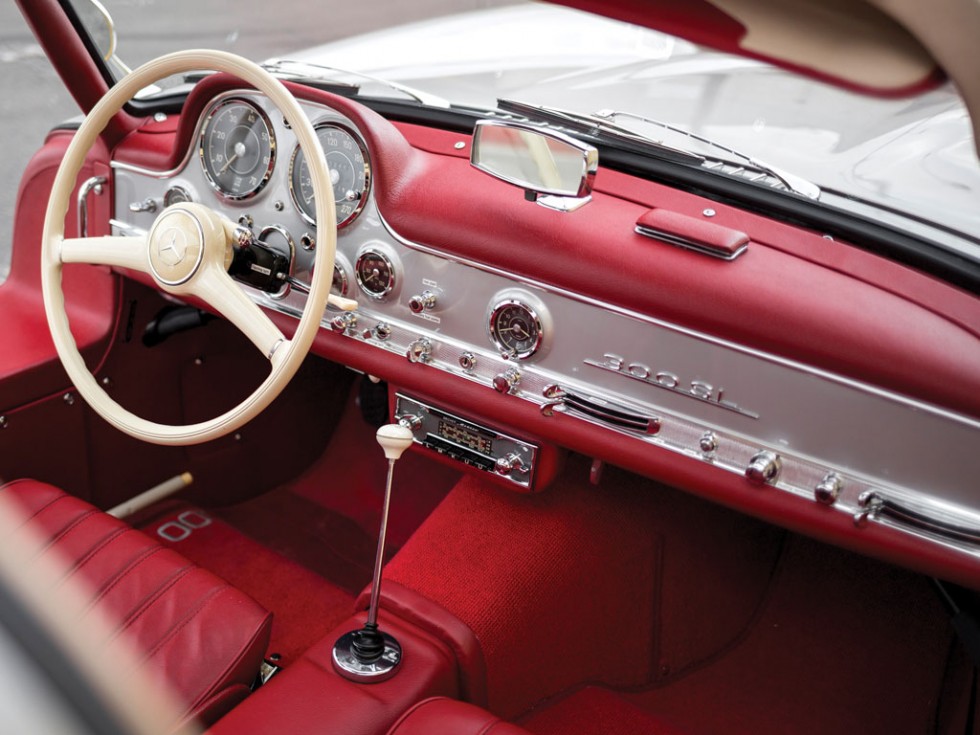 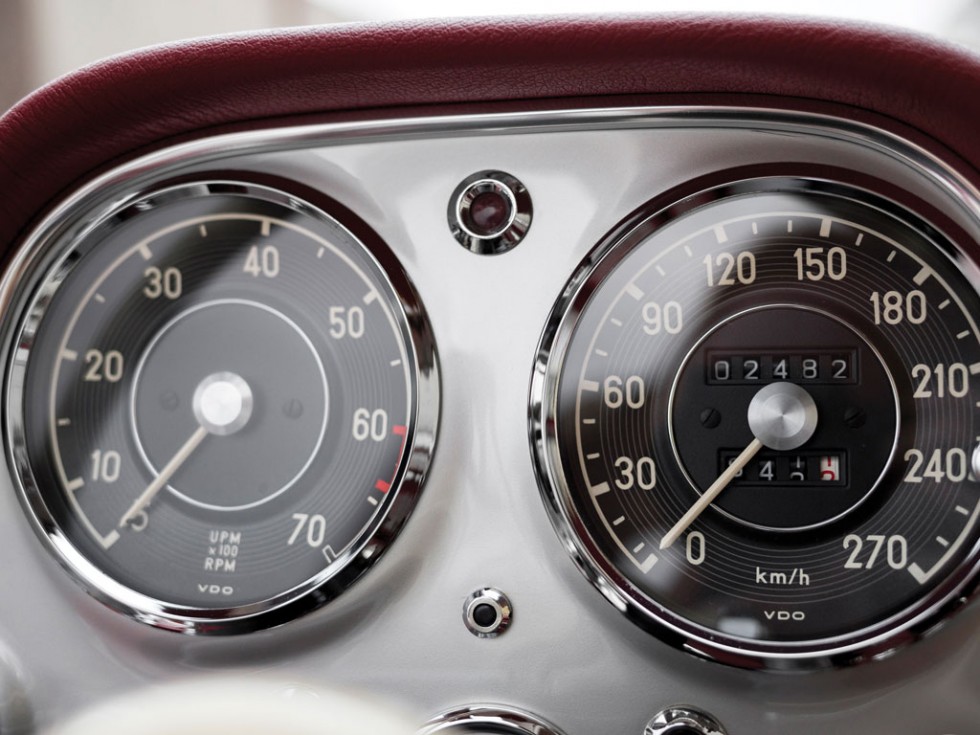 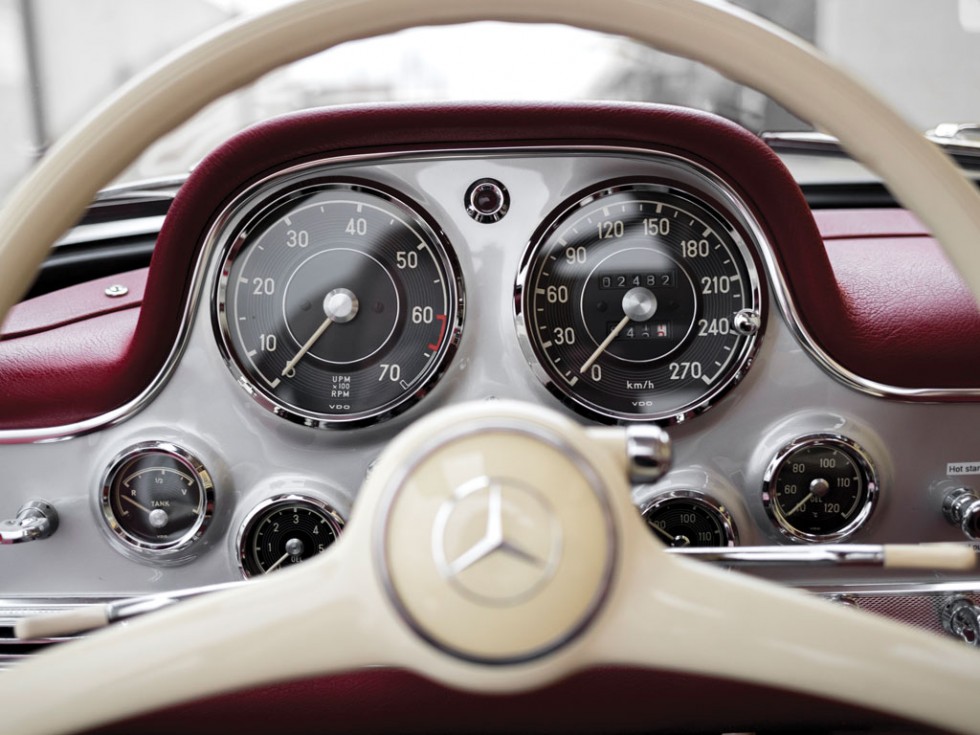 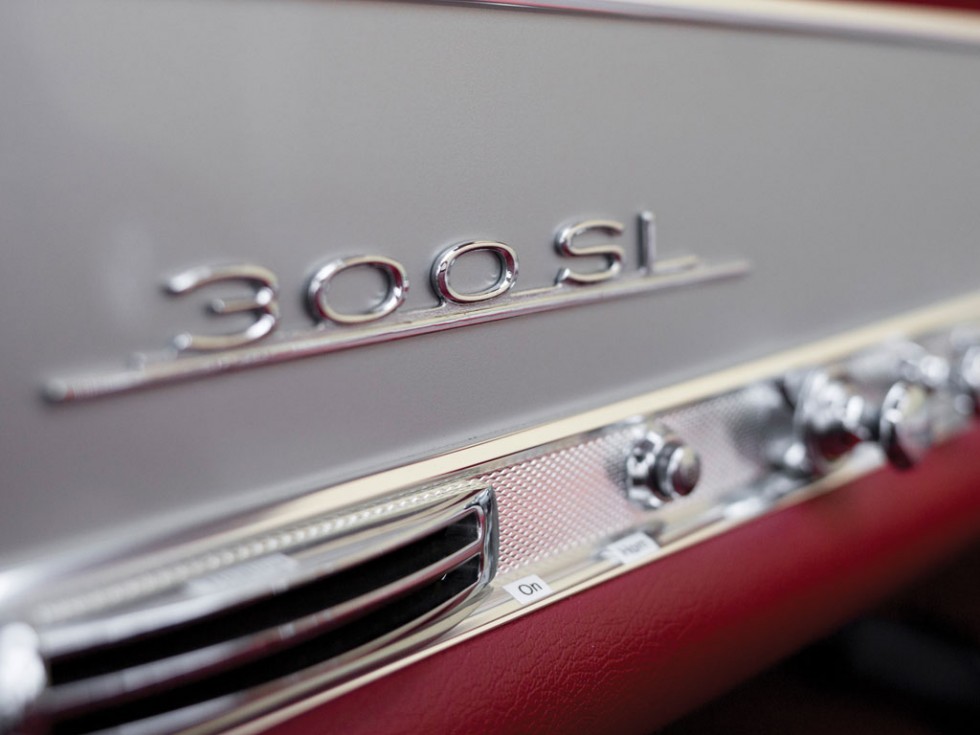 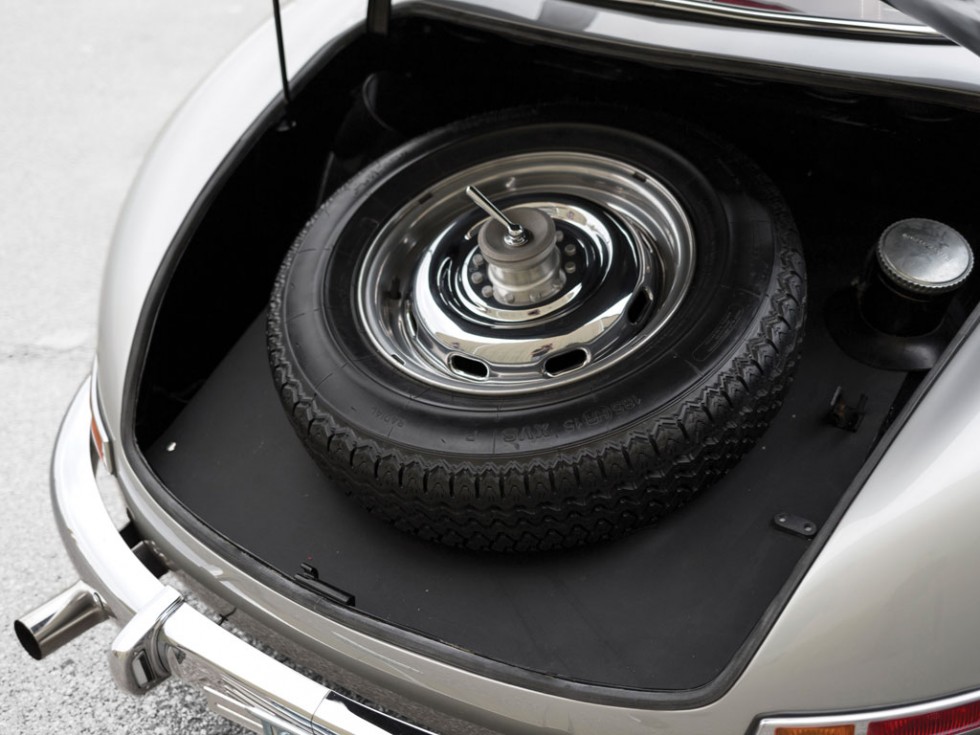 Continue below for the full photo gallery or click here.

For both the jet set and the burgeoning sports car crowd, there was one sports car that reigned supreme in 1955, the Mercedes-Benz 300 SL “Gullwing,” as it became known. The car was so nicknamed for its unique roof-hinged doors, and it was the vehicle that had it all. Gorgeous proportions, brilliant race-bred engineering, and blistering performance made the Gullwing not only one of the most desirable vehicles of the 1950s but one of the most desirable vehicles of all time.

However, not all Gullwings were created equal, and if you were a well-heeled sports car enthusiast in 1955, the aluminum-bodied 300 SL was the car to have. Its lighter bodywork made it even more competitive against other British and Italian 3-liter sports cars. Additionally, these cars were also outfitted with the Sonderteile engine, which utilized a competition-spec camshaft, increasing power output by 15 horsepower. With both a slight increase in power and decrease in overall weight, the additional performance in these cars was instantly discernable from behind the wheel.

It goes without saying that the alloy Gullwing was the cream of the crop and handedly capable of outperforming all of its competitors on both road and track.

The example presented here, one of just twenty-nine aluminum-bodied Gullwings built by Mercedes-Benz, was ordered new by Rene Wassermann, an industrialist and sports car enthusiast who was living in Basel, Switzerland. The car’s factory build sheet notes that Wasserman ordered his new alloy Gullwing with a plethora of special options, including special high-gloss white paint, a red leather interior, a sport suspension, two-piece matching luggage, sealed-beam headlights, and instruments in English, surely making it one of the most well-specified Gullwings built.

The car was completed on October 5, 1955, and rather than having it delivered to his home in Switzerland, Wasserman picked up the car himself and drove his new 300 SL back home. While it is not known when Wasserman sold the car, by the early 1960s it had been exported to the United States, where its second owner was Jerome Seavey, of Chicago, followed by John K. Scattergood III, a principal at Blenheim Motors, located in Upper Darby, Pennsylvania.

This 300 SL remained in Pennsylvania with its next owner Keystone State politician and enthusiast Senator Theodore Newell Wood. Along with representing the 20th District of Luzerne, Susquehanna, Pike, Wayne, and Wyoming counties in the Pennsylvania State Senate, Senator Wood enjoyed sports car racing in his spare time and served as the president of the Hill Climb Association. He also founded the Brynfan Tyddyn Road Races, which were held from 1952 to 1956, with the last year featuring Carroll Shelby as a driver. The SCCA even gave Senator Wood a free lifetime membership for his efforts in sponsorship and participation in racing in the Northeast.

After passing through the hands of Bill Kontes and Joe Marchetti, the 300 SL was acquired by Leslie Barth in 1983. Barth kept the car until 1989. In its next ownership, with Swedish businessman and collector Hans Thulin, it was consigned to Kienle Automobiltechnik in Stuttgart, Germany, one of the world’s foremost facilities, known for their restorations on Mercedes-Benzes and 300 SLs in particular. The car was sold to a German collector, who in turn commissioned Kienle to perform a full restoration. Notably, damage to alloy-bodied 300 SLs is remarkably common, as the aluminum is notoriously thin and can quite literally bend under the pressure of an ill-placed hand. Furthermore, the bodies are known to deteriorate at the mounting points, where aluminum meets steel. As a result, almost all lightweight examples have been reskinned or repaired at some point, and on this particular car, any parts of the body that were irreparable were replaced.

Upon completion, the car was repainted in traditional Mercedes-Benz silver and retrimmed in its original color of red leather. As is to be expected, the quality of the workmanship is absolutely superb, with the tremendous attention to detail and factory correctness befitting of a Kienle restoration. Indeed, aside from this car’s rarity as an alloy-bodied Gullwing, its association with this restoration facility is a point of pride and desirability all its own.

With a subsequent owner in 2002, the 300 SL was inspected by Mercedes-Benz Classic and determined to still retain all of its original mechanical components and drivetrain. After passing through a collector in Switzerland, the car was acquired by its current custodian. The Gullwing has been preserved in immaculate condition ever since, with its odometer displaying only 2,481 kilometers, presumably since Kienle’s restoration.

Not only is this one of just twenty-nine aluminum-bodied 300 SL Gullwings produced (as compared to over 1,400 steel-bodied cars), it also features all the highly desirable options and accessories one would want on a Gullwing, including the Sonderteile engine, sport suspension, Rudge knock-off wheels, and a two-piece luggage set. Following a recent test drive by an RM Sotheby’s specialist, he found the options on this example to be immediately apparent, making the car noticeably quicker than the “standard” 300 SL Gullwings, and he also reported that it was “dialed in” and great fun to drive.

For the discerning collector, it would be difficult to find a more desirable example than this matching-numbers car. This is, quite simply, one of the most sought-after and rarely seen Mercedes-Benzes in the world. 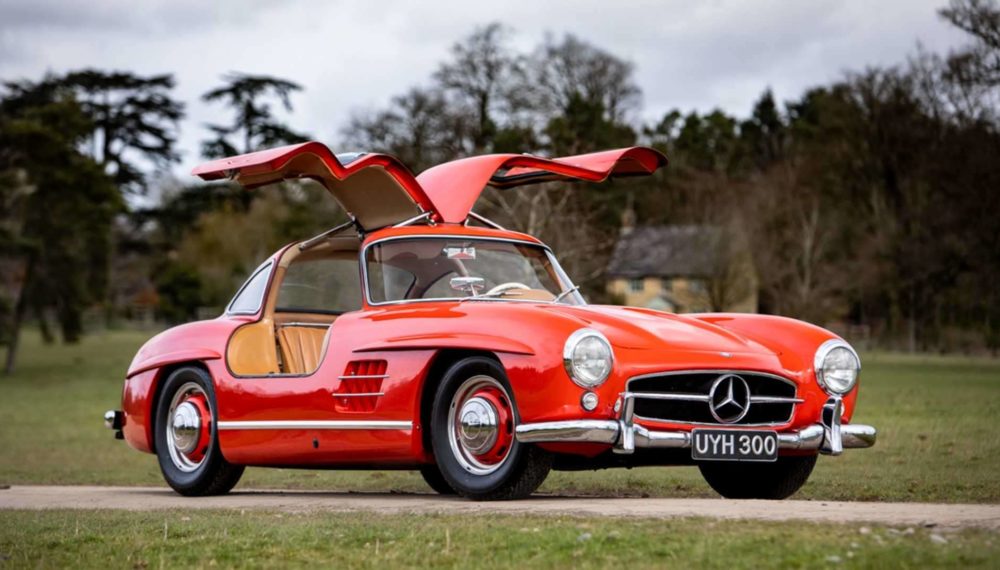 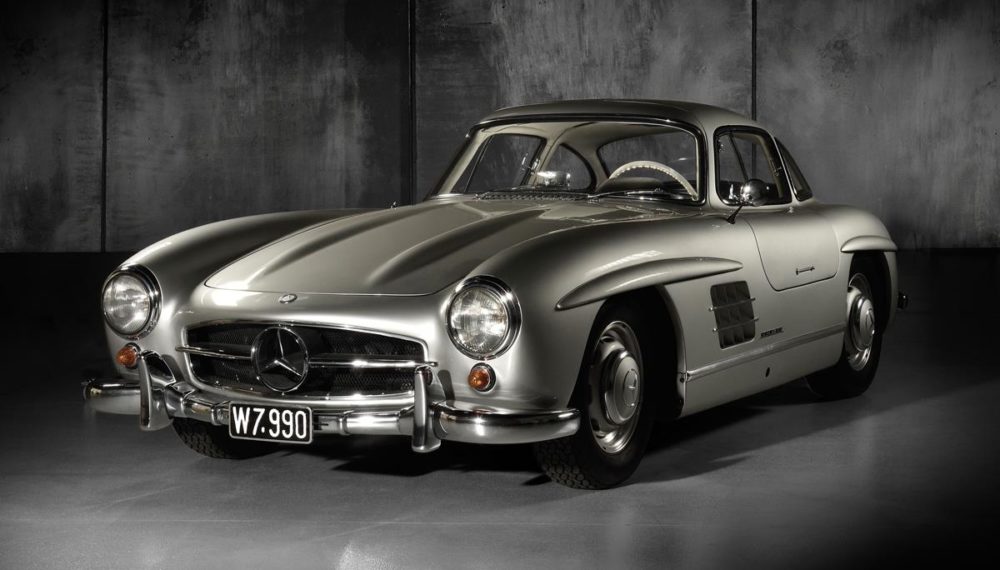 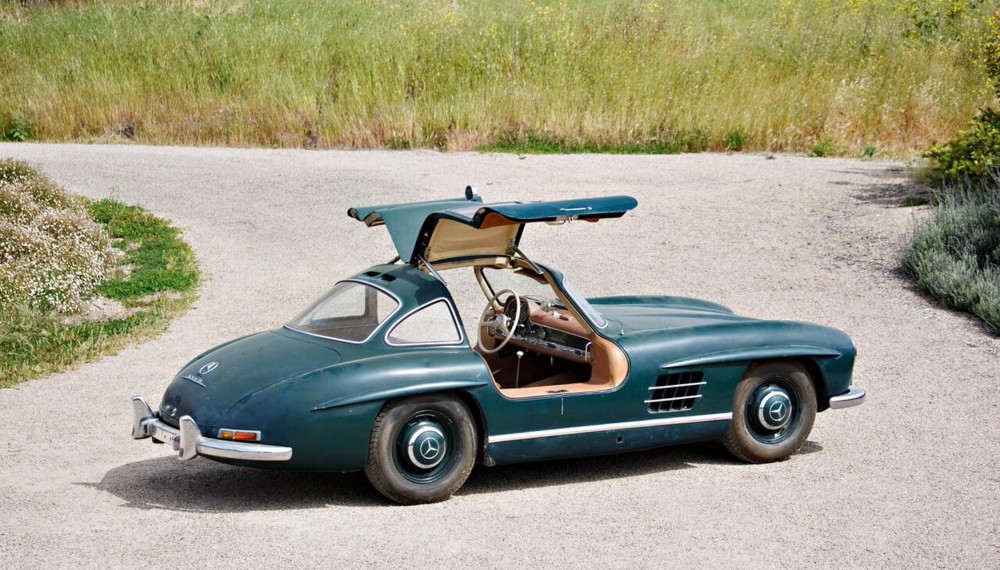