Traditionally the top of the Mercedes-Benz product range is occupied by the grand coupé and the Concept S-Class Coupe provides a clear vision of what will fill in that spot. With its sexy appearance and bold style it embodies the design philosophy of sensual clarity.  Or to put it quite simply, it looks amazing! The interior features spectacular architecture and  exclusive appointments ensuring the four-seater defines state-of-the-art of modern luxury. 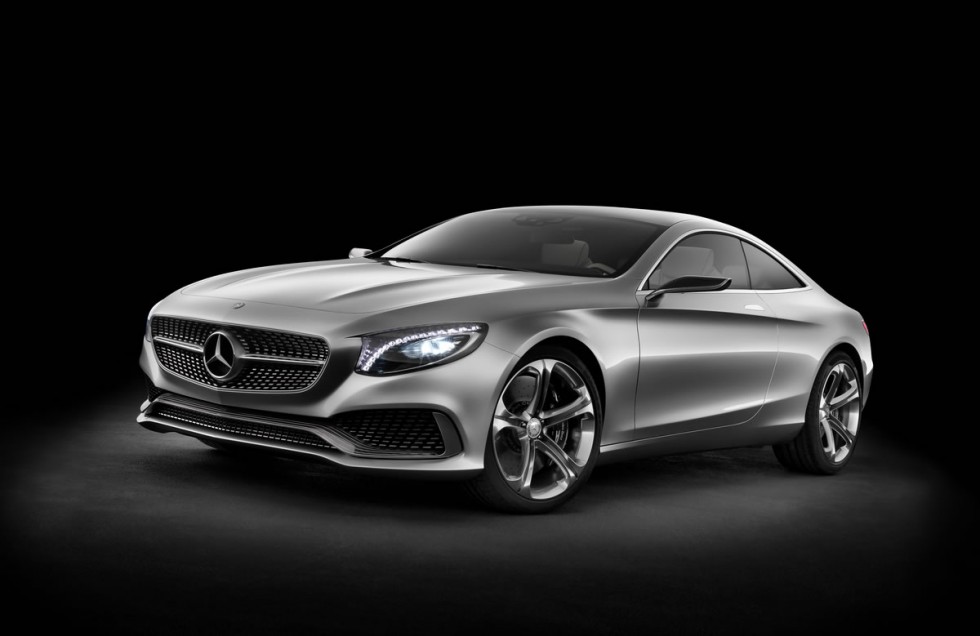 “The new S-Class Sedan was received enthusiastically in the market and perfectly lives up to its role as a representative of the power of innovation of Mercedes-Benz,” says Dr. Joachim Schmidt, Member of the Management Board of Mercedes-Benz Cars, Sales & Marketing. “On the S-Class Coupe as the traditional top of our product range, the designers take advantage of their additional freedom and thus create an automotive masterpiece.”

Gorden Wagener, Vice President Design at Daimler AG, adds: “The Concept SClass Coupe combines tradition and emotion, and is a symbol for the embodiment of our design style of sensual clarity. The perfected design with self-assured style and the highly exclusive appointments make the coupé a true design icon and an expression of modern luxury.” 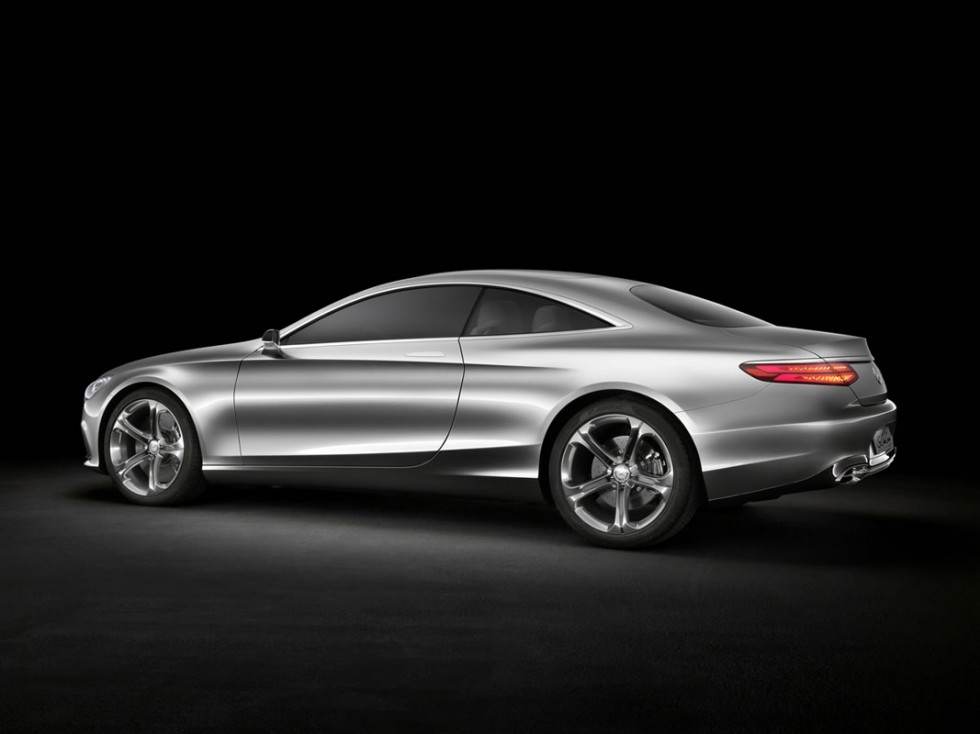 Design: sensual clarity at its most captivating

Sensual clarity as an expression of modern luxury – this was the focus for the designers, and is the design philosophy of Mercedes-Benz. The goal is to create clear contours and smooth surfaces that express high technology while exuding emotional appeal. The sensual clarity is reflected in the core design values of tradition, emotion and progressivism. These are the guiding star, and are accentuated differently depending on the model. Mercedes-Benz creates a bridge between modernity and the avant-garde, between tradition and progressivism. Each model series has an assigned role and a very specific character, depending on the attributes on which the design focuses. And yet a Mercedes-Benz is always recognizable as a Mercedes-Benz. The designers draw from a gene-pool of styling features typical of the brand, incorporating new stylistic developments in the interests of keeping tradition alive.

“Design needs the sublime! Because design is the best brand ambassador. At the center of our work is sensual clarity as an expression of modern luxury, because this is precisely what gets to the heart of our brand philosophy – the bipolarity of intelligence and emotion,” says Wagener. 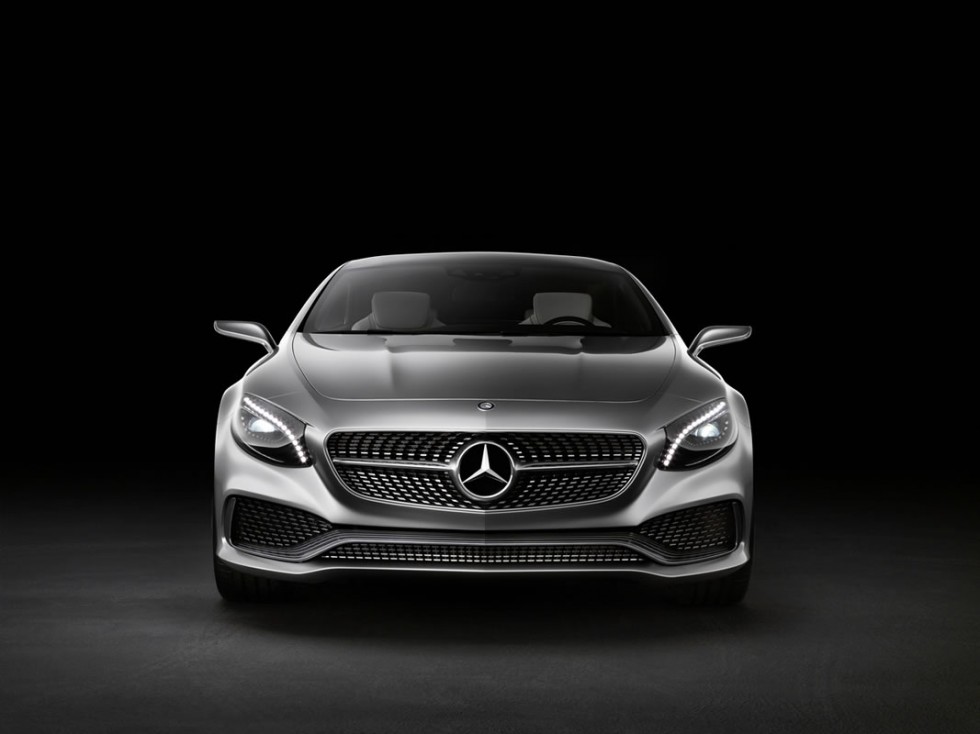 The flowing profile of the Concept S-Class Coupe embodies sensual clarity in a modern way. It is characterized by typical rear-wheel drive proportions, which are emphasized by the Mercedes-typical signature, the dropping line. The long hood with distinctive lines and powerdomes, the crouched greenhouse with high beltline, the accentuated wheel arches as well as the 21-inch wheels (tires at front 265/35 R 21, at rear 295/35 R 21) and the visually broad rear substantiate the claim of the Concept S-Class Coupe as a masterpiece of automotive refinement. With a wheelbase of 116 inches the coupé measures 198.8 inches in length, 77 inches in width and 55.5 inches in height.

Positively arched surfaces give the Concept S-Class Coupe a sensual character. The sculpted appearance lends it classic elegance that forms a perfect symbiosis with the modern-progressive design idiom.

The view from the side is marked by the dropping line in keeping with the emotional character of the vehicle. It underscores the brand-typical proportions like a signature. The lines are deliberately reduced to the basics. This creates a timeless clarity.

The creative interaction of various design elements lend the Concept S-Class Coupe a superior and self-assured front: in the middle is the three-dimensional and further evolved diamond radiator grille, whose structure is defined by rectangular, dark chrome-plated elements. It frames the central Mercedes star and one blade.

The full-LED headlamps with their iconic eyebrows as daytime driving lamps lend it an extremely self-assured and distinctive gaze. On the Concept S-Class Coupe the eyebrows have been further advanced with a semicircular counterswish. The diamond-look of the headlamps and the tail lamps underline the luxurious appointments of the show car.

The side profile is defined by the dome-shaped stretched roof line and frameless doors. An elegant, three-dimensional chrome frame surrounds the glass areas that are uninterrupted by B-pillars. This underscores the typical Mercedes coupé look. In designing the pillared exterior mirrors the designers took liberties offered by a concept car and made them especially slim, giving them an elegant appearance.

A muscle above the rear axle protruding from the side wall generates a sense of lightness and dynamic spirit even at a standstill. The positively arched surfaces and lines of the side walls flow into the rear end with a dramatic tapered effect.

The rear end with its surfaces, broad shoulders and distinctive character lines rounds out the emotional overall appearance. Moving the license plate to the lower bumper section allows positioning the three-pointed star more prominently on the smooth trunk lid. This is complemented by a chrome trim strip modeled with attention to detail. It runs horizontally across the trunk lid and continues past the tail lamps, creating visual width. The arrangement of the LEDs in two horizontal rows within the two-piece tail lamp looks high tech and at the same time is reminiscent of the relief-type design on earlier models. 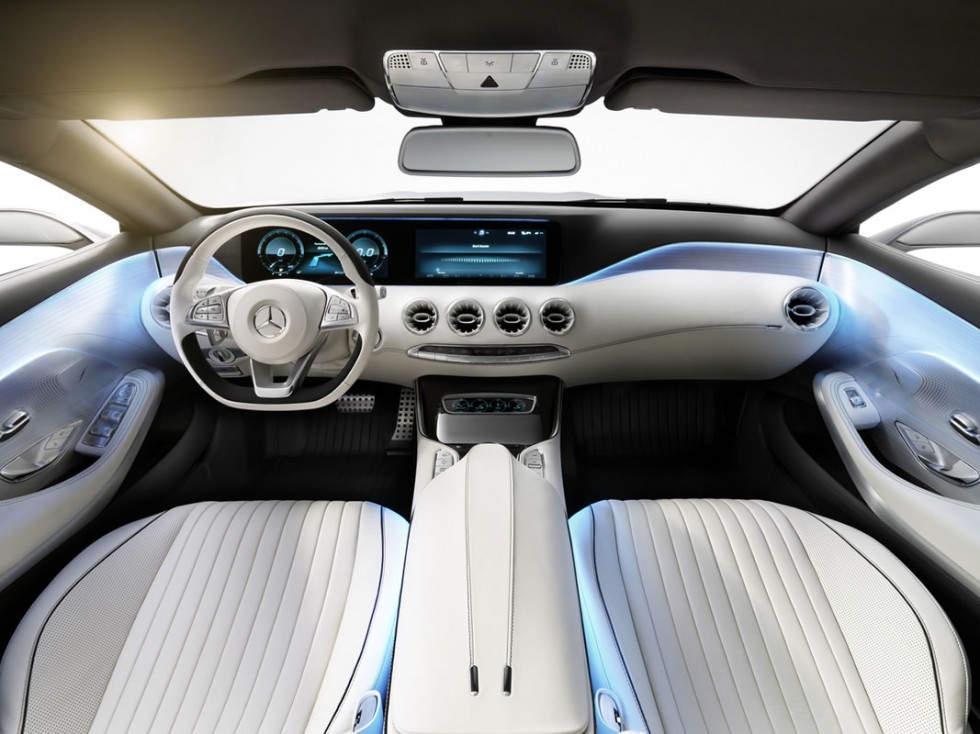 The interior: dynamic flow of lines

Sculpted elegance and simplicity also characterizes the interior. The white instrument panel exudes sensual clarity. Its curved shape is reminiscent of a whale’s fins just before it re-enters the water. Like the entire interior it is dominated by flowing lines: the upper and lower wave create a clear structure.

The air vents, which among other places are housed as a four-piece cluster in the center of the instrument panel, have a futuristic and highly detailed design: fins that route the air stream surround an oval hole. The vents are designed to add contrasts and are made of a mix of white aluminum with a ceramic-like appearance and brushed and polished aluminum.

The aluminum control elements have a functional and clean design, and provide an exciting contrast to the organic and avant-garde shapes that surround them.

On top of the free-form surface under a reduced hood are the 12.3-inch screens familiar from the new S-Class. They have an aspect ratio of 8:3. In the Concept S-Class Coupe the fully glazed color displays are even slimmer and seem to float even more freely. As high-tech elements they offer an exciting contrast to the sensual landscape of the instrument panel. The color scheme of the displays is a bluish-green and consequently sporty and modern.

A touch screen showing four world clocks is located on the center console. The driver can choose which clocks to display: To do so, the driver first scrolls on a globe in the display and selects a time zone before a drop-down menu offers the corresponding city selections. The world clock concept was designed and implemented by designers and engineers at the Mercedes-Benz Advanced Design Center in Palo Alto, California.

The central command unit on the center console looks like a shiny jewel. Its extremely high-quality “black diamond” surface creates depth of field. The “black diamond” method uses the chemical CVD (chemical vapor deposition) gas phase process to deposit a precious metal on a high-sheen chrome surface at temperatures of 1,830°F. The metal reacts with the surface to form a layer that is highly scratch-resistant and has a high adhesive strength. 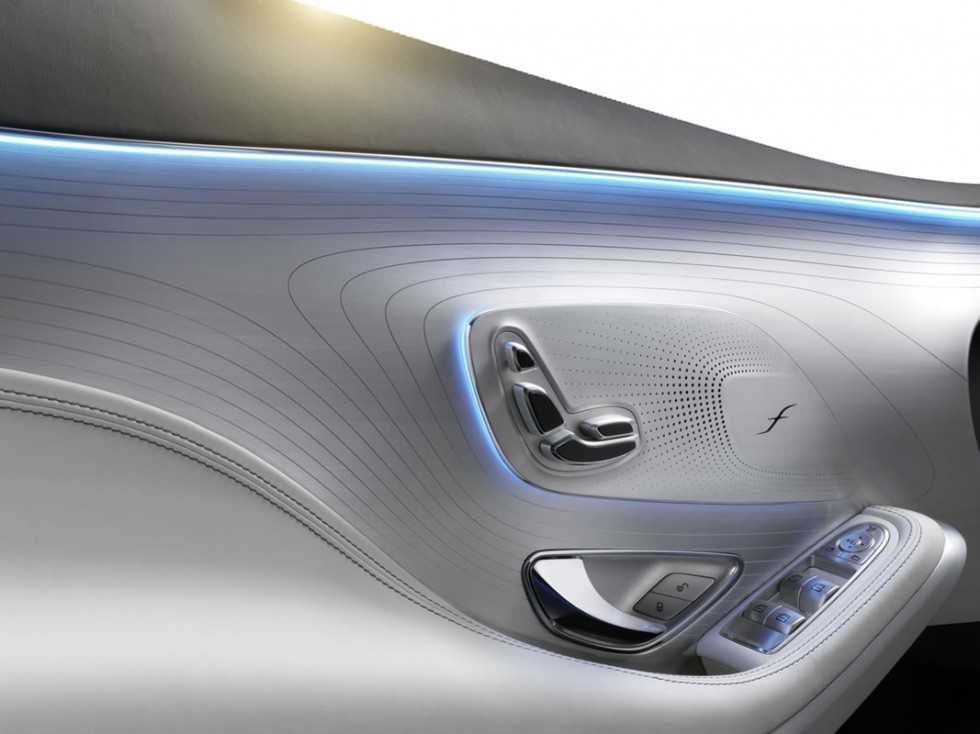 The door panels of the Concept S-Class Coupe are made from aluminum. Using computer algorithms delicate topographic lines were milled into the metal and mimic the contours of the door-mounted control elements. This creates an interesting light pattern with tiny sparkling highlights. For this creation the designers drew their inspiration from rock formations in Utah. The progressive perforations of the loudspeakers were also generated using algorithms and display some intelligent aesthetics of mathematics.

Like the entire interior the seats have a highly dynamic and natural “flow of lines” and continue the sculpted design of the shapes. The front seats evoke associations of haute-couture tailoring because their sculpted shape embodies sensual lines reminiscent of figurines in fashion design. In the upper section of the seat the side bolsters envelope the occupant. The vertical lines of the seats come courtesy of an array of delicate piping, which is continued formally by leather strips in the carpet. Piping on the side bolsters provides contrast and like the perforation of the seat surfaces is a factor in the sporty-elegant impression.

The choice of colors and materials plays with the extroverted contrasts of anthracite and white as well as aluminum, and bolsters both the timeless modernity and avant-garde nature of the design and the claim of the Concept S-Class Coupe of ultimate exclusivity, high quality and perfection. In this spirit the instrument panel and seats are made from supple calfskin, the silk carpet was made by hand using the tufting process and captivates with its precious iridescent sheen. In this process the threads are stitched through the backing. The headliner of the vehicle is made from hand-woven silk and consequently underscores the exclusive character of the interior. 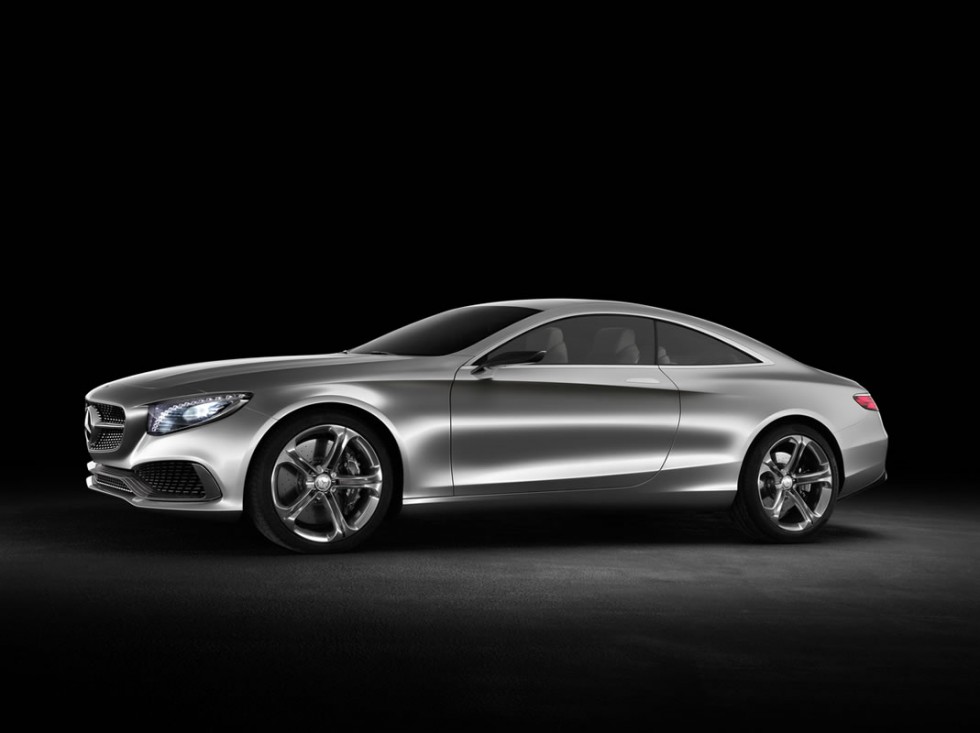 The technology: intelligent assistance systems and a seeing suspension

The Concept S-Class Coupe is powered by a V8 Biturbo engine. This engine produces 449 hp from a displacement of 4,663 cc. The peak torque is 516 lb-ft.

The Concept S-Class Coupe is equipped with the “Intelligent Drive” technology from Mercedes-Benz. Thanks to two “camera eyes,” the stereo camera can create a three-dimensional view of the area up to about 160 feet in front of the vehicle, and as “6DVision” can detect the position and movement of objects. It monitors the surroundings ahead of the vehicle over a range of up to 1,600 feet. This data is combined with the data from the radar and ultrasonic sensors. A multitude of assistance systems monitors the surrounding traffic for the driver. This helps to reduce the burden on the driver and other road users are also protected.

The suspension makes use of the new stereo camera as well: like the new S-Class, the Concept S-Class Coupe can detect surface undulations in advance. If ROAD SURFACE SCAN detects such undulations with the help of the stereo camera, MAGIC BODY CONTROL adjusts the suspension in advance to suit the situation. Using the camera images and vehicle status information, the control unit continuously calculates the best control strategy to cope with uneven stretches such as long undulations.

The infotainment system also meets the highest standards: the MoodGrid software from music recognition service Gracenote makes it possible to listen to whatever music fits the mood. Finding suitable songs no longer requires the driver and passengers of the Concept S-Class Coupe to awkwardly search through their collections of digital music. Based on a selected mood the software compiles a pre-selection of songs. This compilation not only includes familiar songs, but music from a catalogue containing 18 million tracks – adapted to the individual taste and the respective mood. The navigation system based on the Garmin NaviCore also offers more convenient orientation with a modern design and a 3D view. 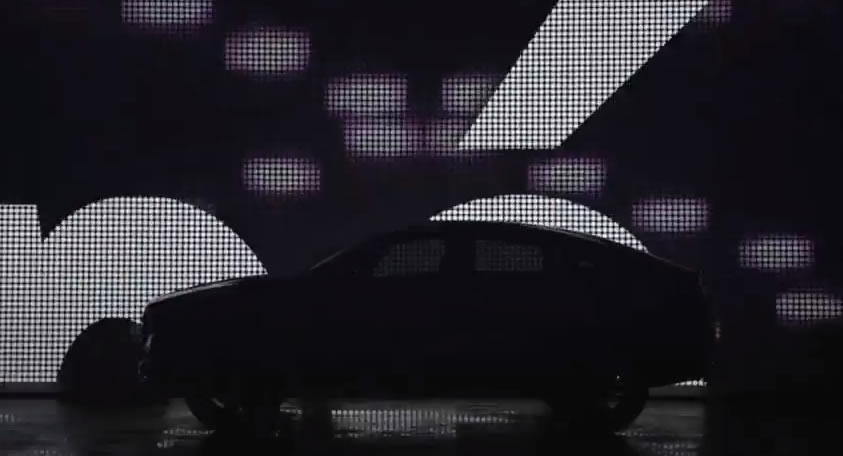 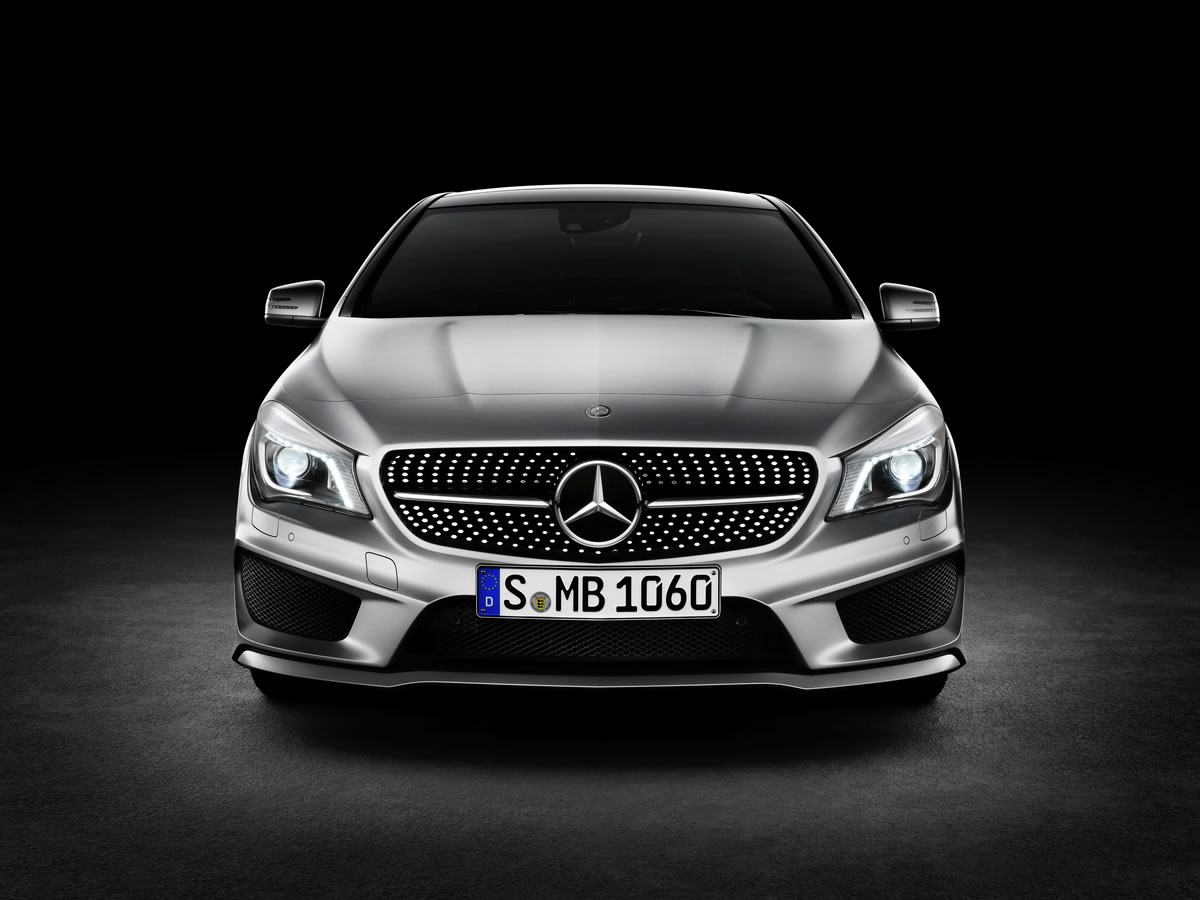 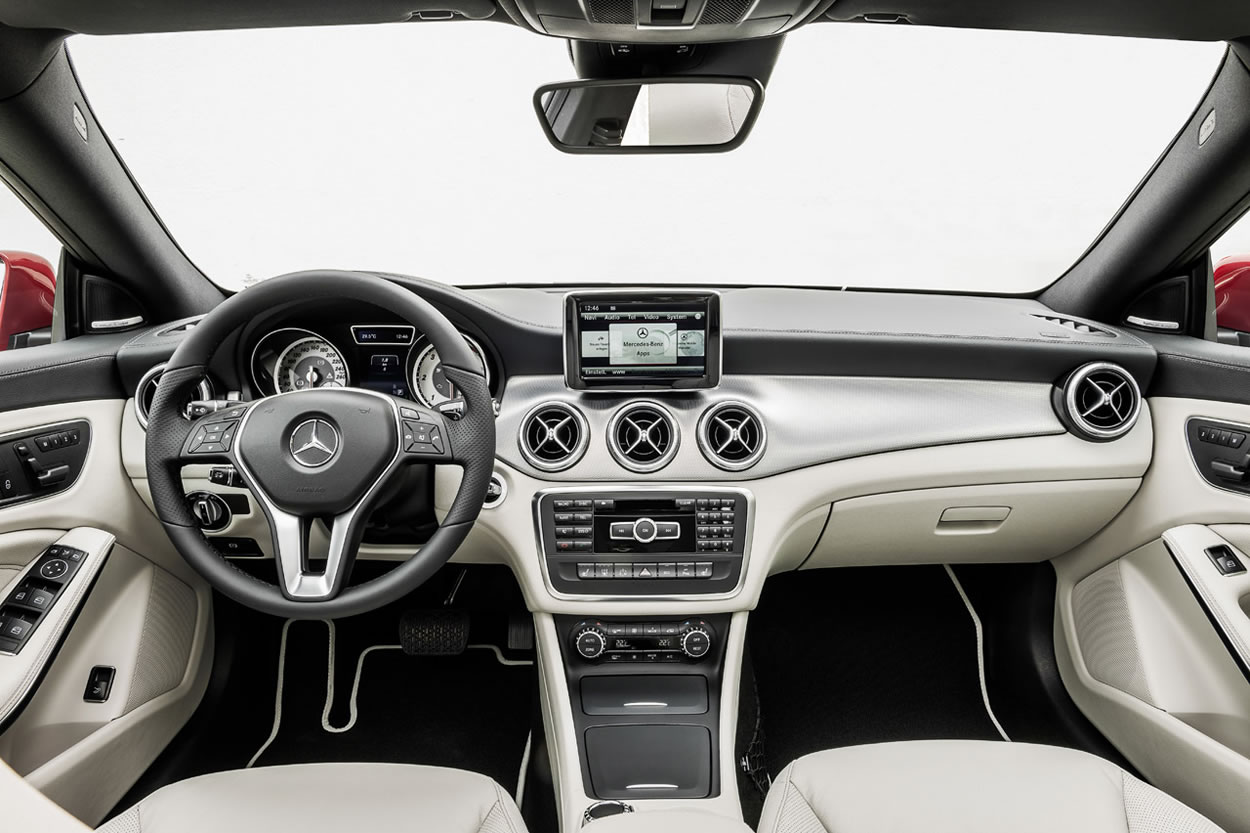