Mercedes-Benz is synonymous with their tagline, the “best or nothing” to market its vehicles for the last 21 years. To ensure its 2021 Mercedes-Benz S580 sedan ticks that “best” box, the German automaker has loaded its flagship vehicle with technology, including an infotainment system that learns to anticipate its owner’s needs, some new rear-steering tricks and upgrades to its advanced driver assistance features. 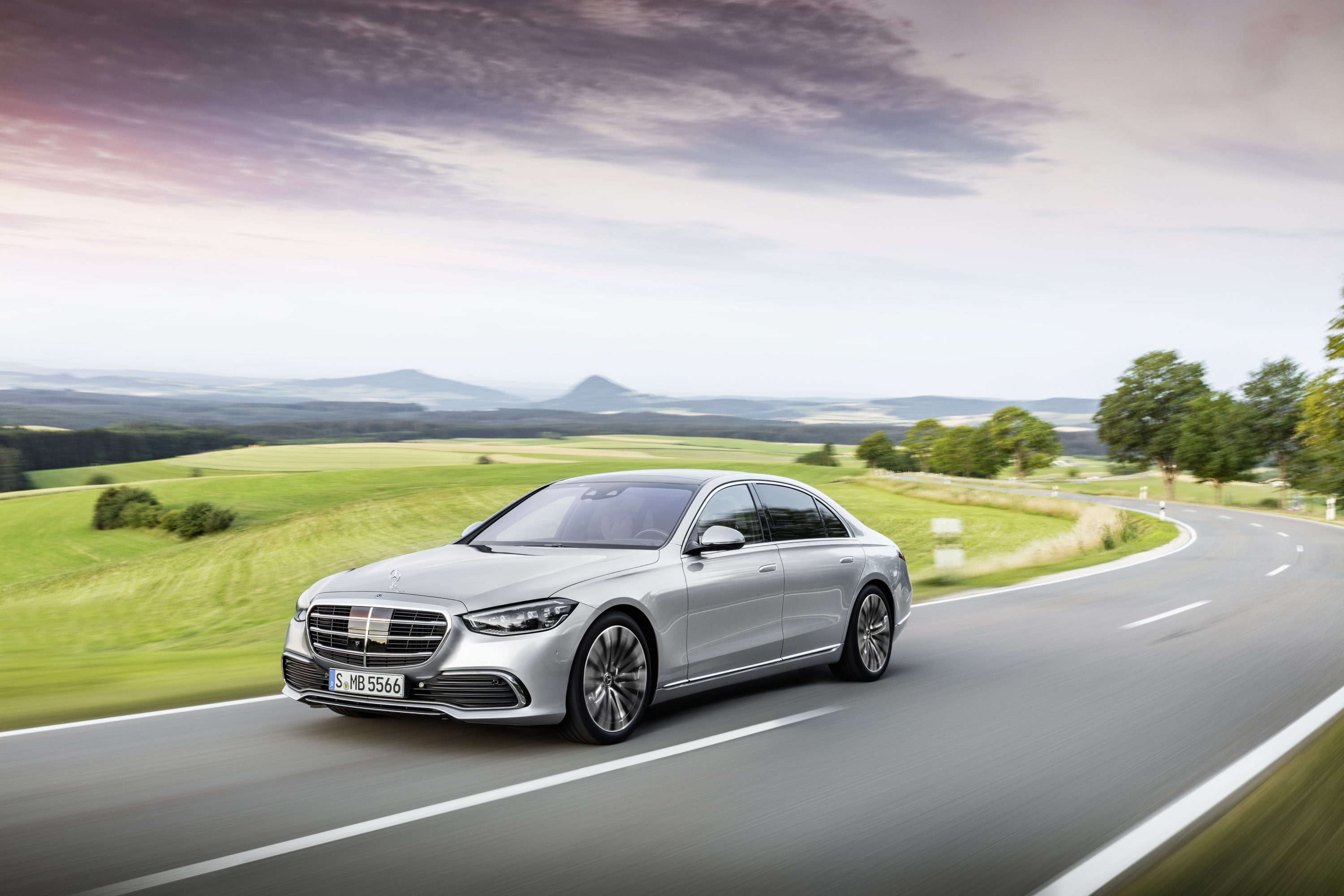 With a price tag that starts at $110,850, it’s the luxury car for the executive who wants nothing but the top-of-the-line Mercedes sedan with all the bells and whistles — and then some.

In S-Class tradition, the sedan is still the biggest and best in show. The new version gets longer (by 1.3-inches) and taller (by 0.4-inches), making more space for passengers and cargo. The base 2021 Mercedes-Benz S500 comes with all-wheel drive and a new inline six-cylinder engine that makes 429 horsepower and 384 lb-ft of torque. That’s a 60-plus horsepower bump over the last generation model. The S580 with all-wheel drive has a smooth, powerful and quiet 4.0-liter twin-turbo V8 that makes 496 horsepower and 516 lb-ft of torque. Both versions also get a 48-volt onboard mild hybrid system. 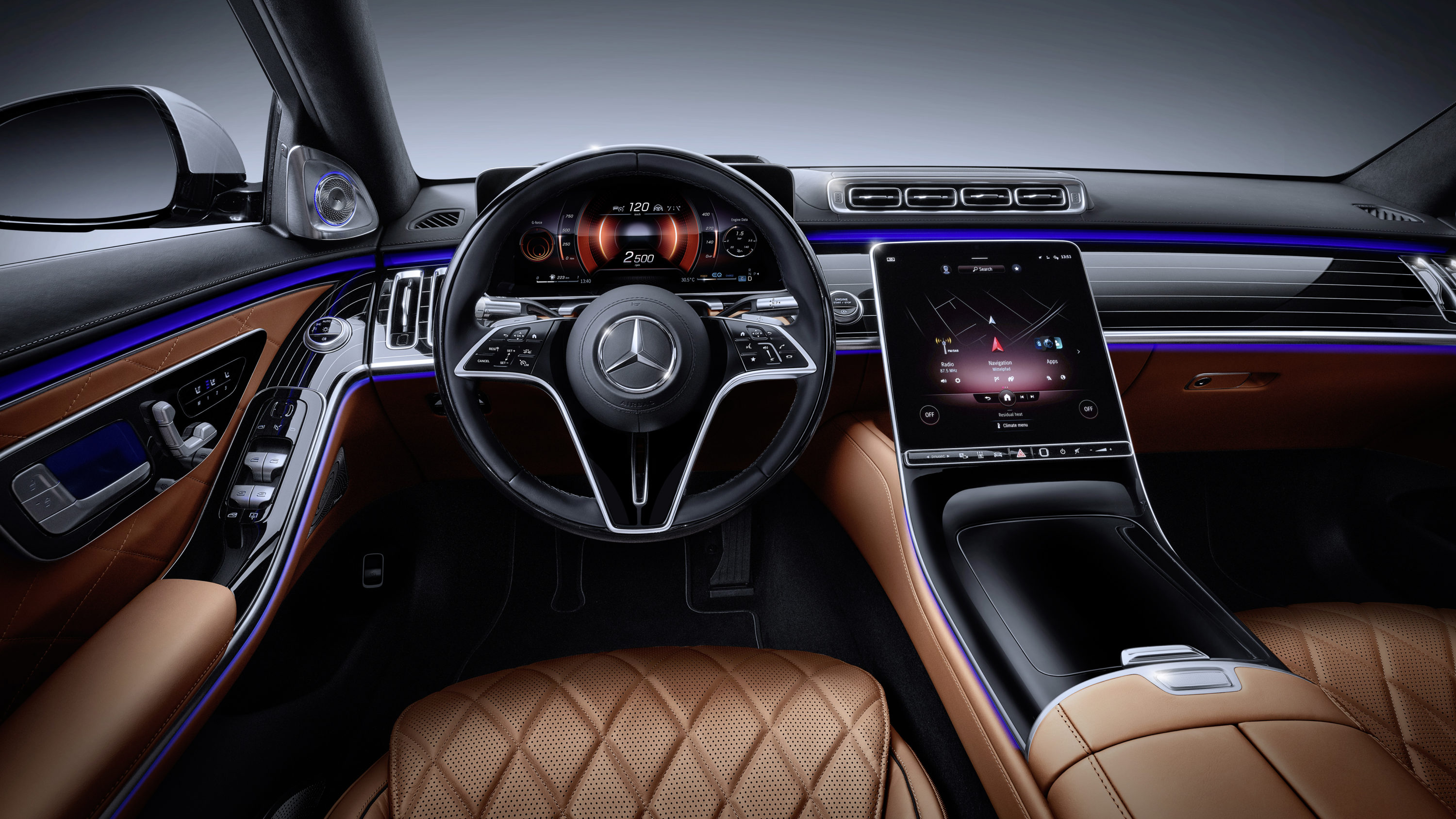 Mercedes-Benz has always praised its “human-centered innovation” in its S-Class. Initially, the automaker used technology to improve safety (things like ensuring that the doors wouldn’t suddenly spring open in a crash in the 1950s and crumple zones in the1960s). Since the 1990s, the brand has focused on making driving, parking and navigation less clunky and difficult to use. For example, it had an optional voice recognition package in 1996 that allowed you to activate your carphone with a voice command.

Mercedes has continued to push the technology envelope, most recently launching an all-electric counterpart to the S Class called the EQS. The 2021 S-Class might mark a new generation of the executive hauler, and it has plenty of technology to offer, but it doesn’t quite outshine the all-electric EQS. 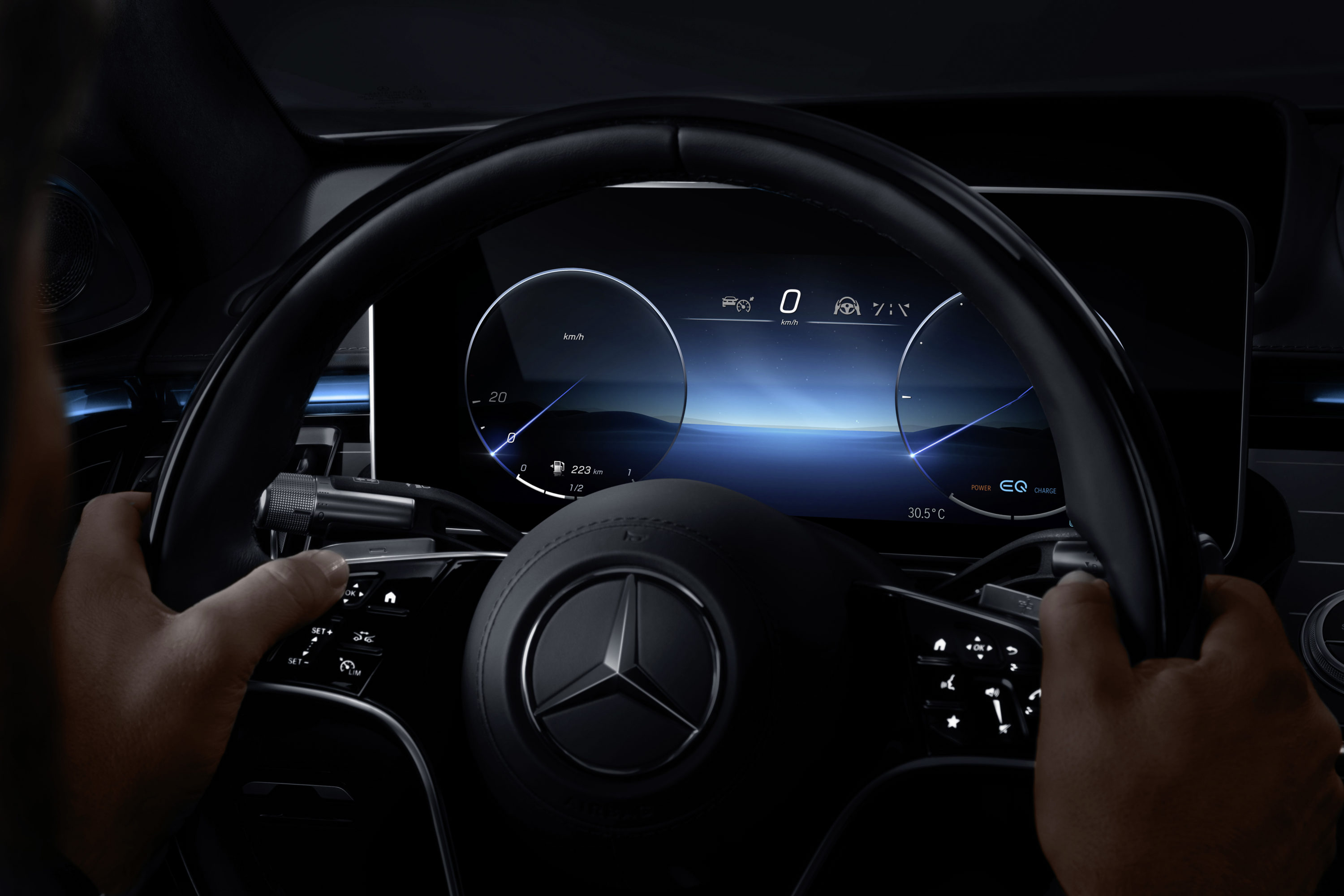 Mercedes has long been a player in the advanced driver assistance system space, debuting an adaptive cruise control feature called Distronic in 1998.

In the 2021 S-Class, ADAS gets an upgrade (called Drive Pilot) that includes a total of 22 sensors and cameras all around the vehicle, which send information to five multicore processors that can analyze the driving situation 1,000 times per second and adapt the suspension accordingly.

All that’s to say, the car “sees” and responds to road conditions, other vehicles, road signs, pedestrians and cyclists, and then should respond like a human driver would.

On the drive from Los Angeles to Montecito (about 130 miles if you take the freeway the whole way), on both winding mountain and ocean roads and stop-and-go traffic on LA’s heinous, concrete block 405 freeway, I kept the S580 in adaptive cruise for most of the trip. The system worked as intended, with the S-Class accelerating and stopping at the appropriate times as I crept along in bumper-to-bumper traffic, from the 105 to the 101. What’s more: I wasn’t exhausted (and pissed off) when I arrived at my destination after a meandering six hours on the road.

Rear wheels in both directions up to 10 degrees, which reduces the turning radius by nearly seven feet.

Even when a texting Angeleno decided to change lanes, nearly side-swiped my car and narrowly avoided driving into the backseat of the vehicle ahead, the adaptive cruise system maintained control. I was paying attention as this incident unfolded, but Mercedes has designed its system to ensure drivers are attentive even as the ADAS features handle some of the driving tasks.

Touch sensors inside the car and on the steering wheel as well as eye-tracking and facial recognition cameras monitor the attentiveness of the driver. Take your hands off the sensors, and the driver’s display will alert you to your wandering ways, disengaging the ADAS system after a few seconds. 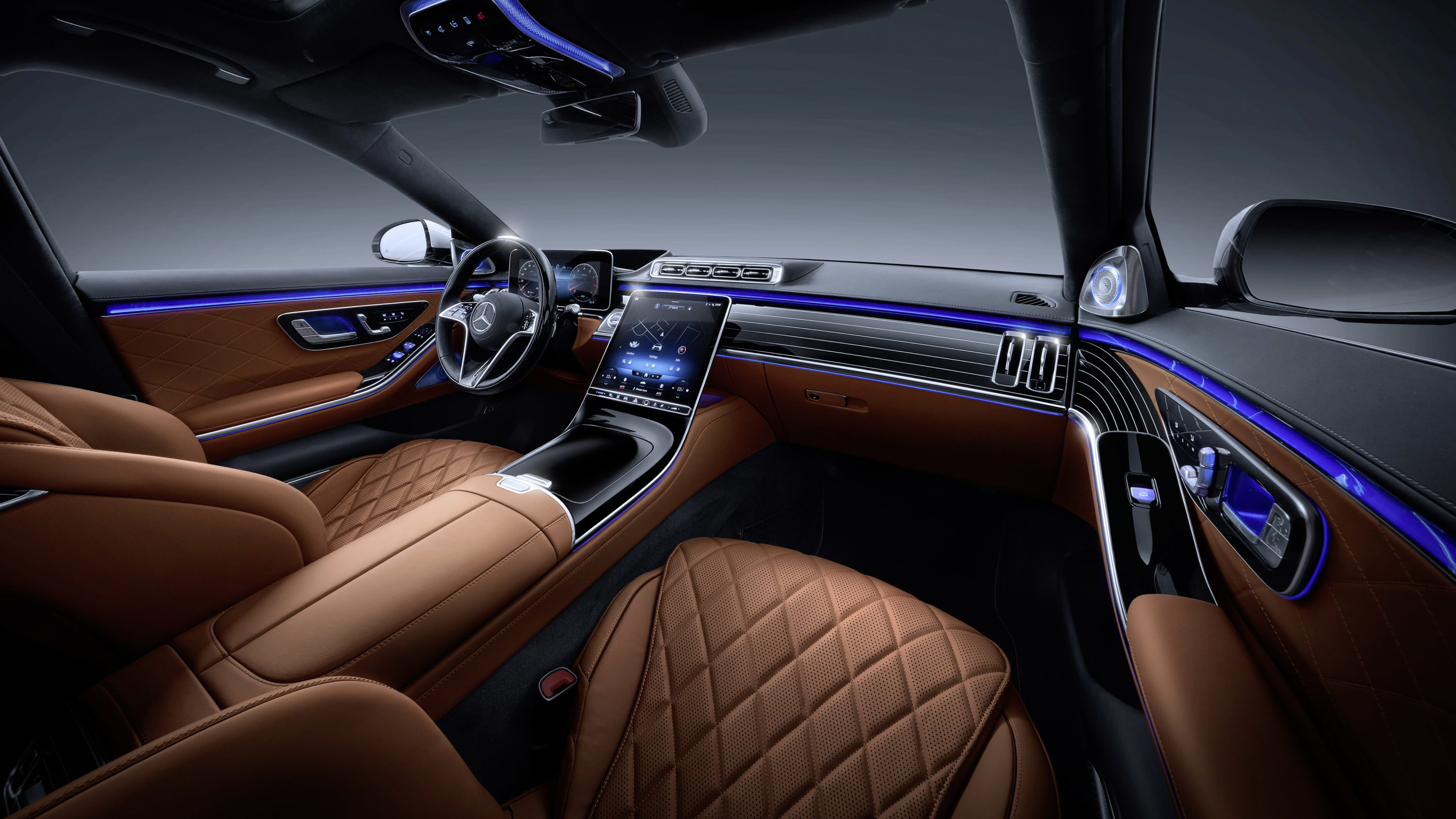 The eye detection and facial monitoring is used to recognize typical signs of drowsiness and driver inattention, and displays a warning message prompting the driver to take a break. There’s also a new microsleep warning that tracks the driver’s eyelid movements by a camera in the driver display.

Mercedes claims that the 2021 S-Class is prepped for Level 4 autonomous driving and, in their September announcement of the new vehicle, executives said that “Level 3 conditional driving is near.” The hardware in the vehicle is meant to support that ultimate goal.

Those 22 sensors and cameras are now capable of recognizing speed limit signs, construction zones and other road hazards, which, at times, I found a little annoying. There were some stretches where the posted speed limit dropped to 55, and when ADAS was engaged, the S-Class would suddenly slow to match the posted speed. That’s great when traffic around you isn’t still moving at 70-plus miles per hour, but in quick-moving traffic, it’s unnerving.

The new S-Class is also outfitted with a lane-changing assistant that helps the driver safely make a lane change without disengaging the ADAS system. Flip on the blinker while operating cruise control (and keeping your eyes up and hands on the wheel), and the S-Class will safely maneuver the sedan from one lane to the other, provided all is clear, centering it in the lane, with very little input from the driver.

In addition to the ADAS advancements, Mercedes has upgraded its parking assistant, as well. When optioned with its branded Intelligent Park Pilot, the S-Class “could” conceivably park itself in multilevel automated valet parking (AVP) structures without a human in the vehicle. As Mercedes notes, though, that would only be available in properly equipped parking structures and “provided that national legislation permits such operation.”

The new S-Class has gotten so large (overall it’s as long as most midsized SUVs on the market today), Mercedes integrated new rear-axle steering, which can turn the rear wheels in both directions up to an angle of 10 degrees, which reduces the turning radius by nearly seven feet.

Mercedes has also paired this with an advanced air suspension system that acts both to soften the ride and adapt to float you over rough roads, while providing an additional layer of safety using those sensors and cameras around the car. If a side impact is impending, the system can lift the body of the car by about three inches in a few tenths of a second to protect passengers. 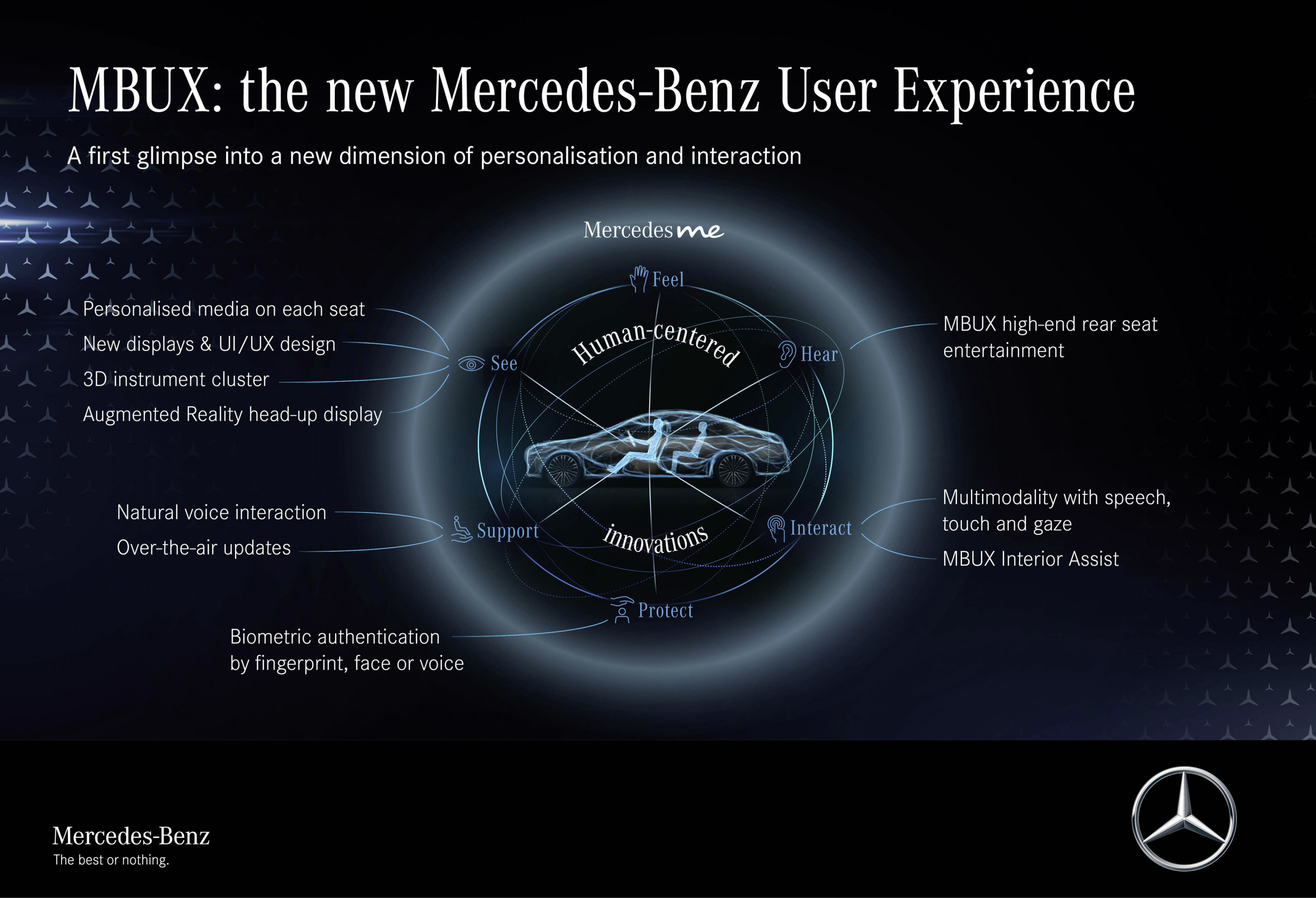 Unlike the EQS that my counterpart, Tamara Warren, drove, there was no 56-inch Hyperscreen in the $148,000-plus S580 I drove. Instead, a single 12.8-inch OLED screen that stretches from dash to armrest graces the center stack and is the control hub of the vehicle. Here you can do everything from control the fragrance that emanates from a diffuser in the glovebox to access Mercedes wellness features. The screen is bright and clear in high-noon sun with no glare and surprisingly not distracting at night.

If luxury is all about seamless and invisible technology that makes long drives feel more like a spa day, then the 2021 Mercedes-Benz S Class has it in spades

However, one of the most impressive features in the new S-Class is the crystal clear and tremendously impressive 3D, augmented reality, head-up display projected onto the windshield. You can move your head around and still see the display from any angle in the driver’s seat. It’s even somewhat visible from the passenger seat. Use the infotainment system (known as MBUX, short for Mercedes Benz User Experience) to navigate to a destination of choice and as you approach offramps, turns and your final location, blue augmented-reality arrows pop up in the HUD and over a video feed of the road ahead in the center stack indicating which lane you should be in, where your turn is and showing exactly where the address you’re looking for is. You can also turn the feature off and change the driver’s instrument display if it gets too distracting, using the touch-capacitive buttons on the steering wheel.

Mercedes says that the computing power of MBUX has increased by 50% compared to the system in the previous model, and the memory bandwidth is 41,790 MB/s powered by NVIDIA Xavier (versus the Tegra 3 in the last generation). That translates to almost no stuttering, load lag or confusion on the system’s part.

Plus, it also helps the very good, natural language voice recognition system work almost perfectly. You can use touch-capacitive buttons on the steering wheel to activate the voice assistant or simply say the key phrase, “Hey, Mercedes,” to activate voice commands. Do everything from ask the system to look something up for you (provided you have connectivity), change the temperature, run one of Mercedes preprogrammed wellness programs (changes lighting, temperature and massage settings), call your parents, or navigate to a new location and the system almost never misses a beat. The only trouble I had with it was when trying to use voice control to navigate to an address with more than four numbers in it. (e.g., 12345 West Elm Street). After a few tries, I resorted to plugging it in on the very intuitive, easy-to-use touchscreen on the center stack.

While I didn’t spend enough time with the new S-Class to try some of the more advanced AI features it offers, Mercedes says that MBUX can do everything from integrate your connected home into the system to navigate to your favorite spots, just like the one in the EQS. In theory, you can then ask the system to turn on your home lights, and it will learn when you like to start the espresso machine on your drive home., As you drive regular routes and ask the system to perform tasks like make calls, or navigate to a specific place each day, the AI will learn your habits. Eventually, it will simply ask you if you’d like to call your office at a specific time or set a route to your favorite restaurant. 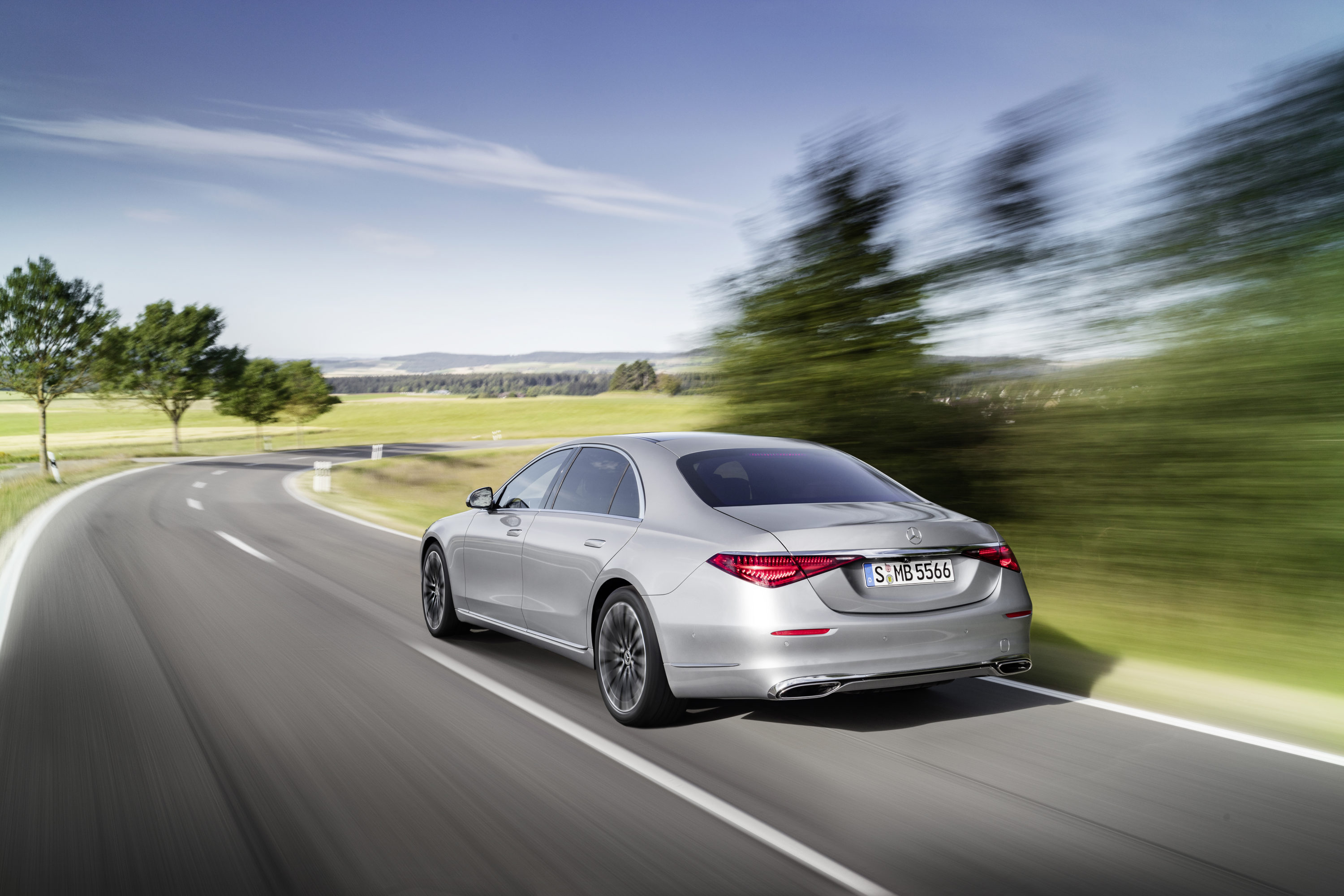 Packed to the gills with tons of features, technology and amenities that make driving a lot more comfortable and a lot less stressful, it’s no wonder that the S-Class has already garnered several accolades, including World Luxury Car of the Year. If luxury is all about seamless and invisible technology that makes long drives feel more like a spa day, then the 2021 Mercedes-Benz S Class has it in spades.

*does not include $1,050 destination & delivery charge 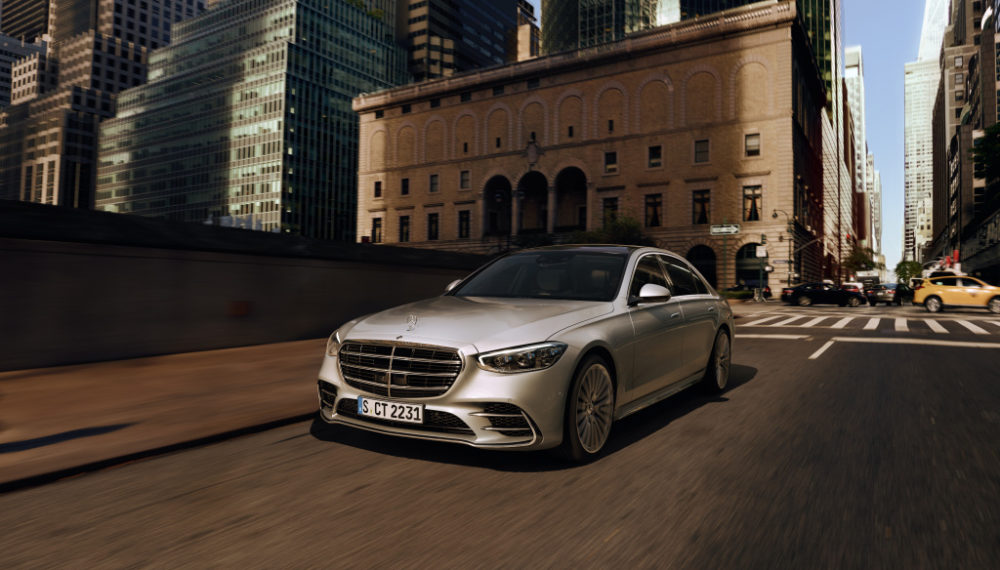