Mercedes is the Team to Beat This F1 Season

Mercedes AMG Petronas Driver, Lewis Hamilton took victory by the narrowest of margins in Sunday’s 2014 Bahrain Grand Prix after an hard fought battle with teammate Nico Rosberg. This is the second consecutive one-two finish for the Silver Arrows team, they finished one-two at the 2014 Malaysian Grand Prix, as they extend its lead at the top of the Constructors’ Championship.  The Mercedes’ teammates were followed by Sergio Perez of Force India-Mercedes, Daniel Ricciardo of Red Bull Racing-Renault and Nico Hulkenberg of Force India-Mercedes in fifth. 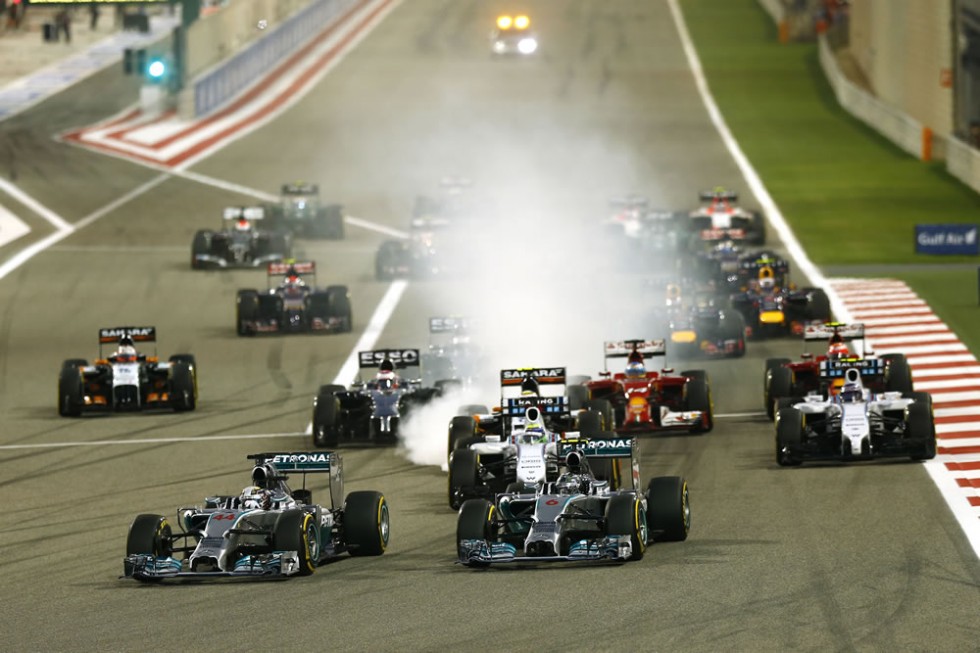 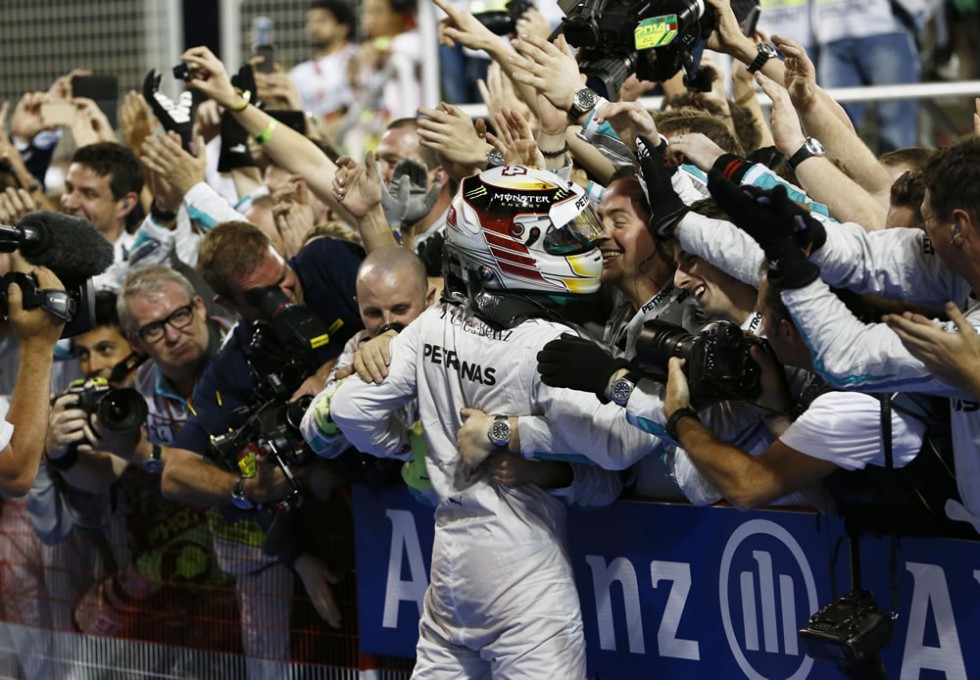 What an incredible day. That was a really tough race tonight and I am absolutely delighted to have come home with the win. It’s a long time since I had a race like that! My weekend started off well but I didn’t really have great pace for qualifying and the race. I knew that I needed a good start and to go into the first corner in the lead was crucial to my race this evening. From there, it was such a battle. Nico drove fantastically well and, in all honesty, he had the pace on me today but I managed to hold on. I knew when the safety car came out that Nico would be on the option tyres and that he would be quick. To try and stay ahead of him was so hard and when I came across the line I was just so relieved. When you’re racing your team-mate, the pressure is really intense and we both knew that we had to bring the cars home for the team and for the championship. All credit to the team for allowing us to race and I hope the fans loved the show that we were able to put on tonight. A big thank you to the team, especially to my engineers for all the information they were giving me during the race, and to everyone here and back at the factories for all their hard work. Another one-two is just fantastic for us. I’m also very proud to have joined Fangio with 24 Grand Prix wins today, he’s one of the great racers of all time so that’s a real honour. 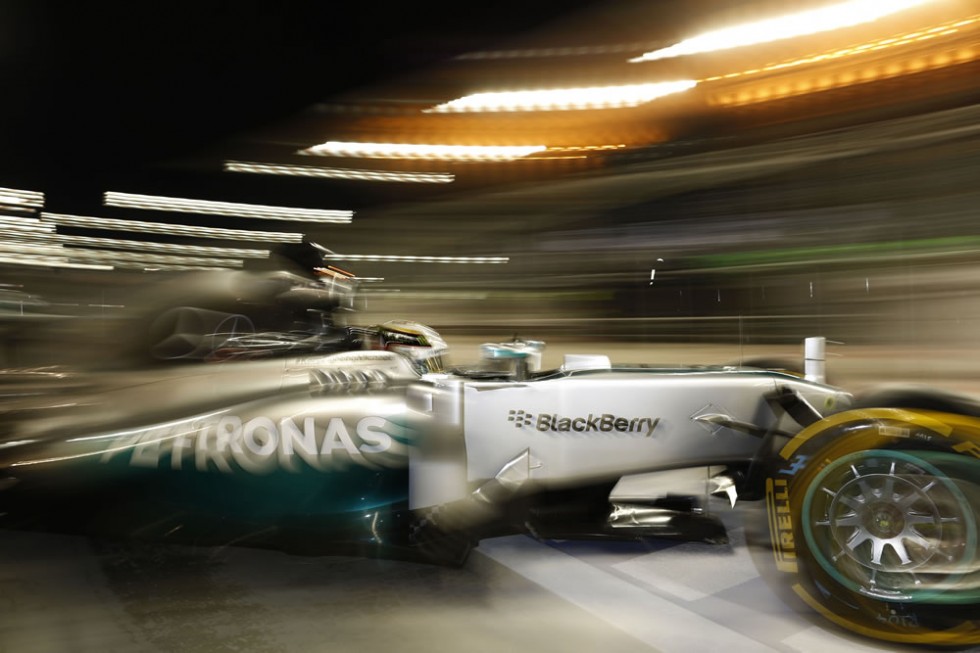 It was a great battle out there this evening with Lewis and this kind of race is exactly why I am in Formula One; I love to race like today. Of course, it’s very disappointing to have finished second in the end but I gave it everything and it just didn’t quite come off for me. Lewis did a great job defending his position and, so often when I did manage to get past, I then couldn’t see him in the blind spot in my mirrors. Our strategy was good and to change it after the first stint was a decision that I made with the team. It was a slightly slower strategy but it gave me the best chance of catching Lewis at the end on the option tyres. The difference between the prime and the option was not as big as we expected however and that’s why I didn’t quite manage to get by. The positive must be that this was a great day for Formula One. The race was a fantastic show and hopefully it proves that the critics of our new technology are wrong. I can’t wait for China now and I want to end up on the top step there.

It has been a fantastic weekend for the team from start to finish. To have led every session with both cars is a real achievement and we can be very proud of the combined effort of our staff at Brackley, Brixworth and Stuttgart. The race was quite simply brilliant to watch, with battles throughout the field. Lewis and Nico drove with a great deal of maturity and respect for both each other and the team but still put on a great show. What we saw today was two drivers at the peak of their abilities fighting fair and square for victory. This is what we go racing for and it was a strong advert for the sport: in particular under these new regulations. With the result last week in Malaysia mirrored here tonight, we now find ourselves in a strong position in both Championships. We are under no illusions, however, that this is a given. We must take these moments and use them as inspiration in the on-going push to achieve our goals.

Another exceptional and well-deserved result for the team today after what has been a flawless weekend from everyone involved. From the very first laps in practice the car looked competitive and we didn’t miss a beat throughout. From the pit wall, the race was fascinating to watch. While there were undoubtedly some tense moments, we knew that both drivers would be sensible enough to bring the cars home: although it was worth throwing in a little reminder just to be sure! All credit to the teams at Brackley, Brixworth and Stuttgart for what they have achieved already this season. A particular note must go to the team at Mercedes AMG High Performance Powertrains, with their Power Units taking all three podium places and six of the top 10 positions. It’s fantastic to show the world that not only can amazing technology be produced within this exciting new ‘Efficiency Formula’ but that racing is alive and well within our sport. We now have a two-day test here in Bahrain where we will be looking to build on our current performance and maintain this momentum into the next races. For now, though, we can enjoy what has been a highly successful few weeks for the team.