Lewis Hamilton achieved his fourth victory of the season today with Nico Rosberg finishing just 0.636s behind in second place. 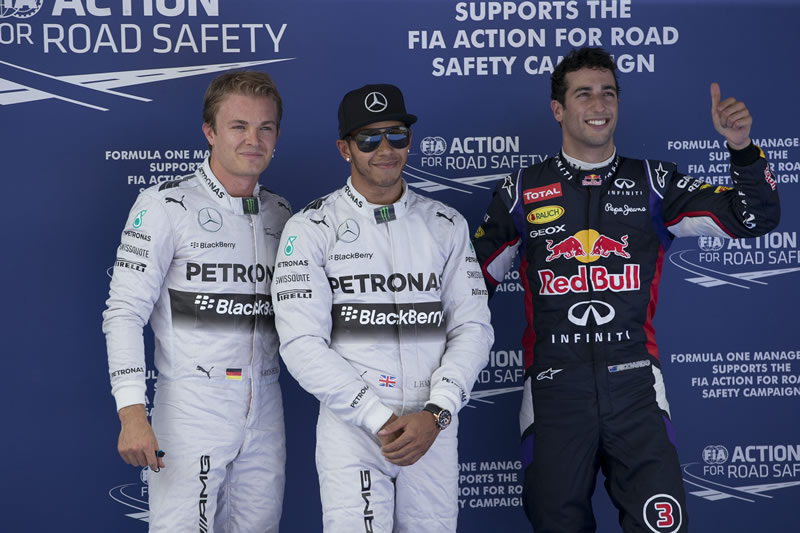 It’s fantastic to get my first win here after eight attempts and it’s really difficult to put that feeling into words right now. We have our bosses from Mercedes-Benz here today and it’s great for the team that we were able to give them a one-two finish. In all my career, I’ve never before had a car or a performance gap like this. Nico drove a fantastic race and I struggled to keep him behind, but I just managed it at the end. I had the same problems with the car this afternoon that I found yesterday in qualifying: I couldn’t attack the corners properly because of snap oversteer and that’s where Nico was catching me. I’m just so proud of this team: we are looking very strong and I’m enjoying every moment and every step of the way. There’s still a long way to go this season, though, so we are staying humble, getting our heads down and working hard. I still have a bit more time to find from the car because it’s very, very close with Nico, so I have to keep working on that. But it’s a great feeling to be leading the championship.

The race was so close at the end today and with one more lap, I could have tried to overtake Lewis for the first time. My start was bad. It is a weakness that we have and we will try to improve. Once it was clear that I was in second place, we chose to go with the slower strategy using the prime tires in the middle stint to get a shot at Lewis at the end when I was on the options. It was very close but not quite close enough so naturally I’m disappointed but I can take a lot of positives from this weekend. We have an amazing car and my pace was really strong here so I just need to find an extra little edge to capitalise on. The next race is Monaco which is not only my home race but has some great memories from my victory there last year.

That was a fantastic afternoon of sport. We have two incredible drivers who are capable of fighting until the last corner of the last lap to achieve success. That was the case again today and they were incredibly closely matched in spite of running different strategies in the race. Their battle is so intense and so close that I am sure it will carry on all the way to the final race. We will savour this victory tonight and enjoy our success – but from tomorrow, our focus is on Monaco. We had a very strong result there last year and our target will be to improve on that this year.

Both cars made a great start and got through Turn One cleanly without incident. From then on, it was all about some incredibly close racing between two drivers, with an hour and a half of constant work between them and their engineers to try and find any possible edge. It’s great to watch both sides of the garage working so well to get the best for their driver. Lewis and Nico both delivered great drives and to see a gap of 0.6s after 66 laps of flat out racing just about sums it up. I would like to thank all the team in Brackley, Brixworth and Stuttgart for the huge effort that went into creating such a competitive car at this pivotal and very difficult race of the season. We are now looking forward to Monaco which brings some very different challenges for us to tackle.