The new 2021 Mercedes-Benz AMG GLB35 tries to be many things at once: Three-row crossover, entry-level performance SUV, a comfy cruiser, and something between a hot hatch and a brute ute. 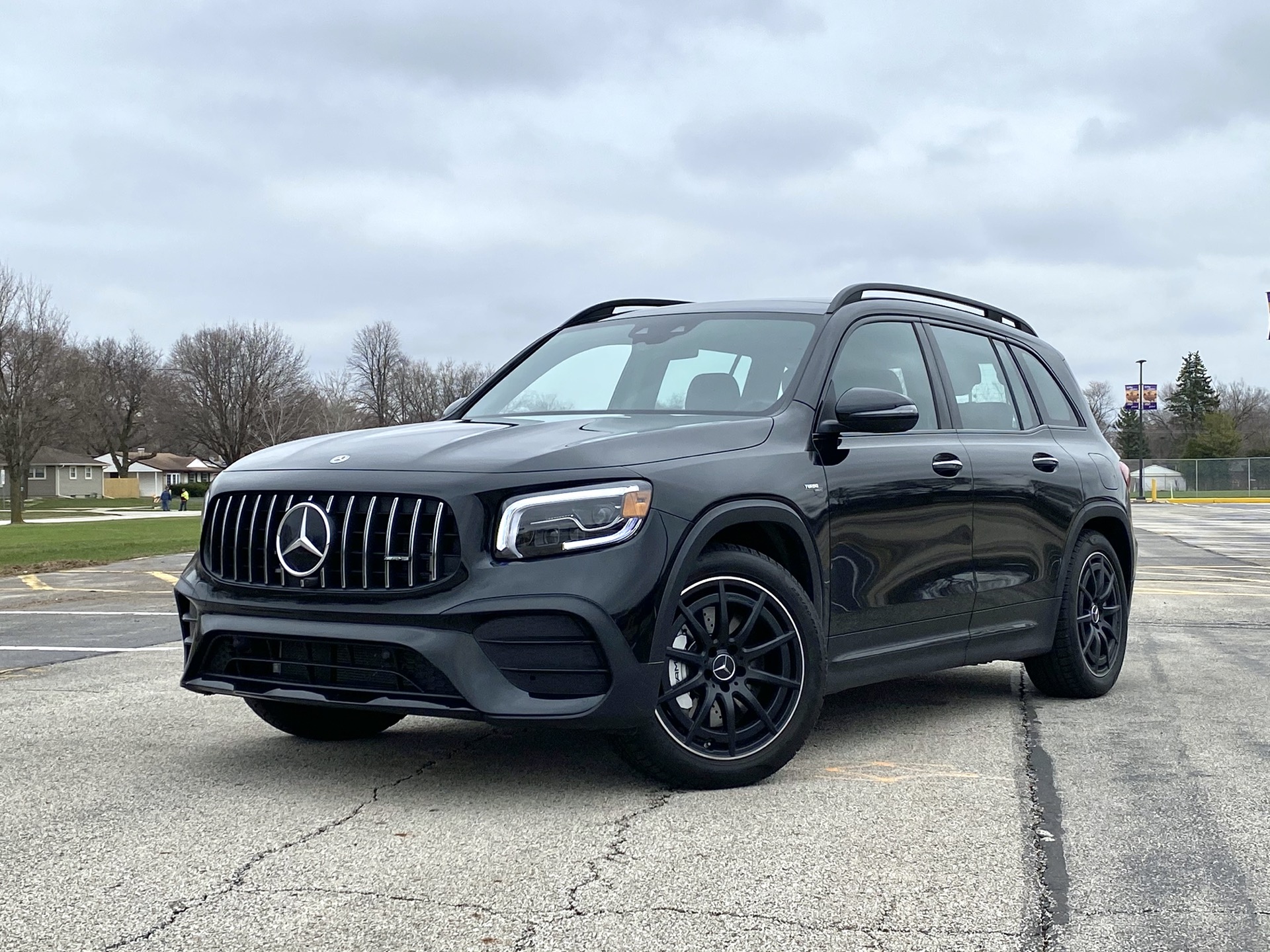 The GLB35 courts the performance- and tech-minded shoppers of the GLB250. Introduced last year, the GLB welcomes new buyers into the family from Stuttgart with a proper, boxy SUV that swapped the GLA’s rally racer profile for something like a lower-case GLS, replete with substantial black cladding and integrated roof rails. The AMG model adds more sinister touches, with a front splitter, a more prominent roof spoiler, and a chunkier rear bumper that houses two round tailpipes clad in black.

I recently spent a week with an AMG GLB35 to find out how an SUV of all trades fits in. The tester came upgraded with 20-inch black alloy wheels instead of 19s ($1,050) with four-piston silver AMG brake calipers glinting through. With the Cosmos black metallic coat ($720), the GLB35 looked like a pit bull, striking in its muscularity and with a foreboding presence, despite its small stature.

This AMG-lite SUV balances its power and proportions with aplomb, behaves well enough to road trip in comfort, but manages to be mean enough to snap the chains of boredom.

I treated it like it was my own running my two young teens around and denying the temptation to be anything but a model driver. We went away for a long weekend and the AMG GLB35 suited us perfectly. It only got better when I was by myself.

The turbo-4 lacks the wallop of larger AMG engines, but launch control comes easy: turn the steering wheel dial to Sport+ mode, mash the brake, rev it until the boost gauge hits the halfway mark, then launch into grins on the way to 60 mph in 5.1 seconds, according to Mercedes.

That’s about a half-second slower than the smaller, lighter BMW X2 M35i (4.7 seconds from 0-60 mph). The M35i’s peak torque of 332 lb-ft comes on at 1,700 rpm compared to the GLB35’s 295 lb-ft at 3,000 rpm. The GLB35’s dual nature of acting behaved under watchful eyes only to turn feral when commanded proved fun every time, but it didn’t have that mind-blowing AMG effect that overwhelms the senses. At 3,869 pounds, it weighs about 150 pounds more than the M35i, and if it were a running back, it would plow ahead more like Derrick Henry than dance like the light-footed Alvin Kamara.

The 8-speed dual-clutch automatic shifts quickly and predictably, and the metal paddle shifters let you dig a little deeper toward the red line in Sport mode. The standard all-wheel-drive system defaults to the GLB’s front axle, but can shuttle up to 50% of the torque to the rear axle based on speed, steering angle, and acceleration.

Body roll was limited despite the tall boxy shape

It was unseasonably dry during my early spring week around Chicagoland, but I didn’t push the handling to extremes on sweeping frontage roads and more tightly wound cloverleaf ramps—more of that self control I talked about, but I wasn’t always an angel. Body roll was limited despite the tall boxy shape, but sharper turns triggered the suggestion of understeer that would get more pronounced the harder I drove. In Sport mode, the suspension firmed up enough that it would dance over road seams, but the ride was never harsh enough to pop out one of my teen’s earbuds or distract them from the world beyond their phones.

For the three of us, the GLB35 had plenty of room for a three-day weekend. The reclining 60/40-split rear seats slid 5 inches and helped mitigate complaints when the front passenger reclined her seat. With the rear seats moved all the way back, we fit three carry ons, a small cooler, and two backpacks in the cargo area, and concealed it all with the cargo cover. It specs out to 22 cubic feet, or 62 cubes with the seats folded down. For taller humans, head room is great due to the boxed roof, but stacking two 6-footers front to back could set front and rear occupants against each other as they jockey for space.

Of the $14,000 in options, the $800 third row fortunately was not one of them. Based on the five-seat configuration I tested, wedging two more seats in the way back wouldn’t make sense even for rare use cases. It adds weight and cost, trims cargo space, and would make knees nervous in both the second and third rows.

The cockpit of the GLB vibes with youth. Large turbine vents separate the upper and lower dash, and 64-way ambient lighting rims the vents and highlights the dashboard. Seemingly wood and metal trim pieces devolve to fancy hard plastic when touched, but Mercedes’ technology couldn’t be more impressive even if the materials were real.

A 10.3-inch touchscreen tops the dash and abuts a 10.3-inch digital instrument cluster that is as customizable as a smartphone’s app library. It’s standard, and it’s brilliant. Five different styles of display can be projected, and pretty much everything housed in the touchscreen can be accessed in the cluster, plus readouts for the G-meter, turbo boost, and power bars. Navigation can be limited to one of the digital dials, like Porsche does, or the display can be swapped to have the map take up the bulk of the real estate, like Audi does.

The steering wheel features the older thumb pads that are easier to use than the haptic controls on the latest crop of redesigned Mercedes. The left pad controls the cluster, the right pad the touchscreen. Between that and the “Hey, Mercedes” voice assistant, the touchscreen is mostly for the passenger.

My tester came with a $400 AMG flat-bottom steering wheel wrapped in nappa leather that was chunky in all the right places. Resistance firms up with speed and adjusts with the five drive mode settings; the tester came with another $400 upgrade that adds suspension tuning and drive mode settings to the steering wheel like hot buttons. The individual settings can also be adjusted on the center console or through the digital cluster. Options beget options.

The $1,295 Multimedia Package had navigation with augmented reality that projects front camera views when approaching intersections. Street names and addresses appear, which is super helpful, especially for urban delivery drivers who might not be AMG’s target audience.

The GLB35 lacks wireless Apple CarPlay, which is a minor inconvenience, but came with adaptive cruise control that changes the speed based on posted speed limits, which should be destroyed and never resurrected. Of the multitude of settings I fiddled with, I couldn’t figure out how to turn it off until watching a video. I should’ve enlisted the kids for that one.

The GLB35 tries hard to satisfy several types of buyers, and justifies itself in the Mercedes lineup. Its quick acceleration, generous interior, and next-level technology create a total package worth the $50,550 starting price. It comes with all the upgrades I’d want over the base GLB250, with a performance edge for about $10,000 more. And it looks so much better than the BMW X2 wagonette. 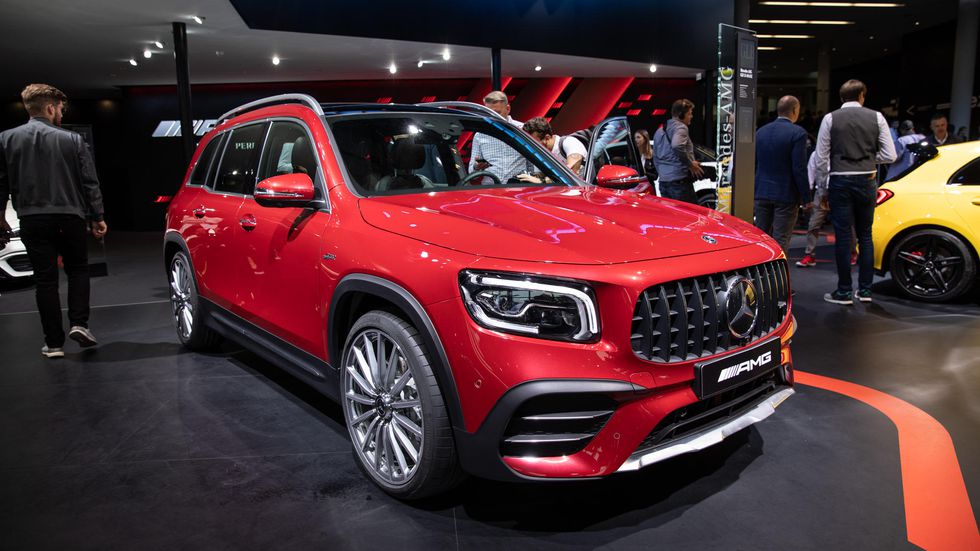