After impressive updates to its small sedans and larger SUVs, Mercedes-Benz has finally gotten around to redesigning its extra-small SUV, the 2021 Mercedes-Benz GLA. If you squint and ignore the swirly disguise stickers, the next-generation GLA is taller and more SUV-like than the crossover we’re familiar with. That’s very deliberate, and now that the GLA is no longer an off-road-stanced hatchback masquerading as a crossover, it’s a more convincing SUV in both shape and market positioning.

While the design direction has changed, the new GLA will still borrow heavily from its A-Class relation. Indeed, nobody could accuse Mercedes-Benz of not making the most of its platforms. The new GLA is actually the eighth compact model Mercedes-Benz has spun off its MFA2 (Modular Front Architecture 2) — not all of which come to the USA — and the second “tall” model after the recently launched GLB.

The GLA will be built at Mercedes’ compact cars factory in Rastatt, Germany, where we had a sneak peek at some pre-production examples. Even partly assembled, without the disguise the GLA looks to share its proportions with the European B-Class, Mercedes-Benz’s not-for-USA compact minivan, which is taller and more space-efficient than both the A-Class and the outgoing GLA. 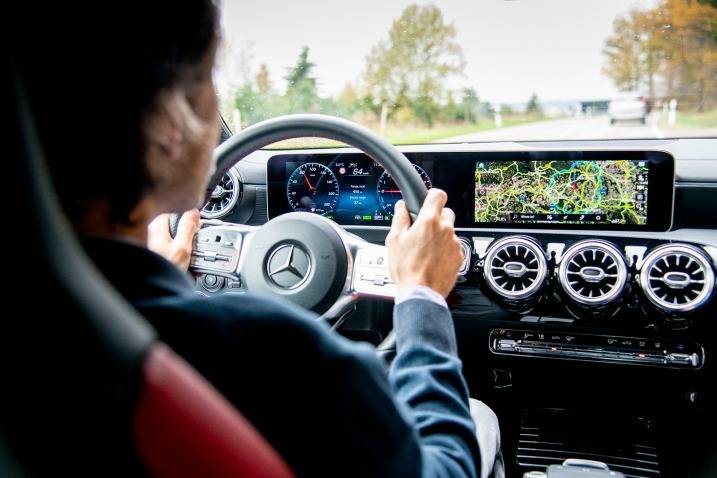 Why does it matter?
SUVs matter for Mercedes-Benz’s profitability everywhere. And here in the USA, the GLA gives Mercedes-Benz presence in the competitive subcompact SUV marketplace. Subcompact SUVs are increasingly the entry point for buyers making their first foray into the luxury market. And they are becoming more popular with older buyers downsizing after their need for a larger family vehicle has passed. Translating the strengths of the new A-Class sedan into an SUV will make the GLA more competitive with both groups.

Being more of a true SUV, with the added practicalities that come with that, should help sales, too. Mercedes underlined that push with the demonstration it gave us of its prototypes’ capabilities, which was exclusively undertaken on a testing area that incorporated a fairly tough off-road course. 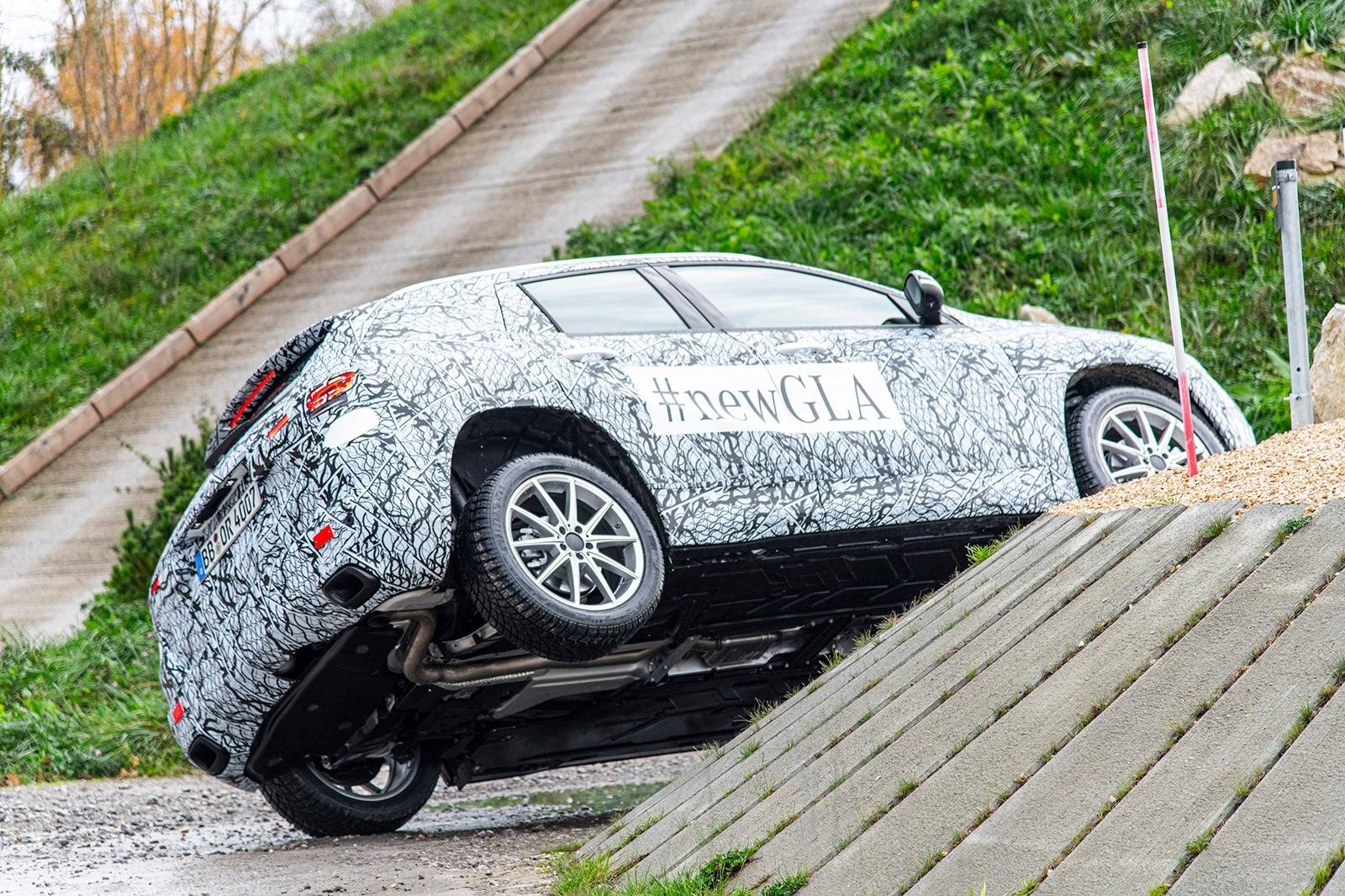 How does it drive?
Full disclosure, we never sat in the driver’s seat, not when the vehicle was moving at least. Our early look at Mercedes-Benz’s new subcompact luxury SUV was limited to sitting shotgun around a test track, a good portion of which was off-road. Being in Europe, we were driven in both a turbodiesel-powered example as well as a GLA with the turbocharged 2.0-liter four-cylinder gas engine that will be sold in the U.S.

Both early prototypes were fitted with 4Matic four-wheel drive, using a torque-on-demand system with a new electronic clutch — the previous GLA had a mechanical one — for greater control of the drivetrain. In regular driving, it’s predominantly front-wheel-drive, with the 4Matic system diverting power to the rear axle when it’s needed. We’re told the system can divert 100% of available power to the rear if necessary. As with the previous GLA, 4Matic will be an option, with the entry-level GLA being front-wheel-drive.

All 4Matic-equipped GLAs will additionally feature Mercedes-Benz’s off-road package, which brings a raised suspension, as well as additional functionality, including downhill speed control, an off-road-tuned engine and gearbox map, and off-road-specific information such as inclinometers in the instrumentation. Those displays can read some fairly impressive numbers, too, with the GLA able to tackle 30-degree side slopes, 60% inclines and descents of as much as 70%. That’s more capability than any buyer is likely to need or, indeed, want, but it’s impressive should your GLA ever be required to do something more demanding than the daily grocery run.

What’s obvious even from the passenger seat is the improved refinement: The cabin is nicely isolated from sound, the gas four-cylinder engine particularly hushed, and road noise, even in prototypes with Bridgestone winter tires, largely absent. Ride comfort, too, is nicely judged, while the seven-speed dual-clutch automatic transmission shifts imperceptibly. Beyond that, we’ll need to wait until we get some time in the correct seat on a wider variety of roads for detailed driving impressions. But extrapolating from what we’ve experienced with the GLA’s closely related A-Class and B-Class models, we can be sure the GLA will offer a finely tuned driving experience, a sure-footed chassis with exceptional body control, and Mercedes-Benz’s usual suite of well-integrated active safety systems.

What’s the interior like?
With its current range of compact models, Mercedes-Benz has moved its interior game ahead remarkably. Mercedes-Benz User Experience (MBUX) screens dominate the interior. They can be as small as two 7-inch displays, but few GLAs are likely to leave the factory without the optional 10.3-inch displays that span a sizable portion of the dashboard in front of the driver. All the MBUX functionality is controlled by small touch buttons on the steering wheel, a transmission tunnel-mounted touchpad via the central touchscreen itself, or by saying “Hey Mercedes” and speaking commands. In terms of user interfaces, it’s all very clear and easy to use. MBUX doesn’t just look superb, but it operates with the sort of slickness we’ve come to expect from smart devices at home and work.

MBUX might dominate the driving environment, but elsewhere the cabin is significantly improved over the existing GLA, both in its materials quality and space. If you’ve sat in an A-Class sedan, you’ll be familiar with the smart finishes on things such as the air vents, the buttons in the center console, and even areas where traditionally (and quite noticeably in the old GLA) you could come across some lower-grade materials. That’s not evident here. The GLA feels like the premium product its badge signals, whatever surface you’re touching. Since Mercedes-Benz introduced its new compact models, rivals have been playing catch-up in regards to interior quality and user-friendliness, and that is still very much the case with the 2021 GLA.

How practical is it?
We don’t have exact numbers yet to qualify our impressions, but the GLA’s cabin feels far roomier inside than the sometimes-compromised space of its predecessor. With its more clearly defined SUV shape, there’s an increase in overall height in excess of 4 inches, and that’s transformational inside. You sit higher, with a better view through the taller and less severely raked windscreen. Similarly, the side glass and bodywork are more upright, which translates to a far more spacious, airy and practical cabin. The trunk offers good space and a wide opening. It, as with the rest of the interior, benefits from the GLA’s greater height.

The 2021 GLA is notably more comfortable inside as a result of the dimensional revisions. That is most obvious in the rear seat. For one, there’s a significant improvement in leg- and headroom. But also the larger glazed area around you — the rear roof pillars are glazed, though that’s not immediately obvious due to the camouflage tape on the prototypes — removes the claustrophobic feel in the back that was problematic with the old GLA. It now feels very much a genuine rival for its SUV competition in relation to its practicality, which is where the old model was lacking.

What does it compete with?
With the new GLB above it set to fight with the BMW X1 and the Audi Q3, the GLA can focus on the BMW X2, Cadillac XT4, Lexus UX and Volvo XC40 as well as innumerable SUV/compact crossover models without premium badges or the elevated pricing that comes with them. (Audi isn’t offering its Q2 rival in the U.S.) The market is not short of choices, but the GLA has proved a good seller in the luxury subcompact SUV class despite its shortcomings relating to passenger and trunk space.

Those will be addressed when this new model arrives in 2020, and so, too, will complaints about some low-rent interior trim materials. The possibility of a plug-in hybrid — Mercedes-Benz engineers neither deny nor confirm the option — could also add some appeal down the road.

What else should I know?
While Europe and elsewhere will have a choice of powerplants including turbocharged 1.6-liter gas and 2.1-liter turbodiesels, in the U.S. we’re only likely to see the regular GLAs powered by the 2.0-liter turbocharged gas engine that produces 224 hp and 258 lb-ft of torque. That should bring a 0-62 mph time in the region of 7.0 seconds, which is in line with the last GLA 250 model.

Higher-performance AMG derivatives will be offered, as previously, with a GLA 45 flagship a possibility and the GLA 35 a certainty. The GLA 35 boosts output from an AMG-tweaked version of the 2.0-liter inline four-cylinder turbo unit, boosting output in excess of 300 hp. Elsewhere in the compact lineup, Mercedes-Benz offers an AMG 45 model, which sees outputs increase over 420 hp. But nobody is confirming whether that will be offered with this series of GLA.

What is more likely is the addition of a plug-in hybrid model option, as Mercedes-Benz already offers these elsewhere with its compact range. With its push to electrification, an EQ Power GLA is a distinct possibility. A 15.6-kWh battery and 75-kW electric motor are fitted within the eight-speed automatic transmission and joined with the 1.3-liter turbocharged gasoline engine for an output of about 215 hp. In the A- and B-Class, this hybrid system allows an electric-only range of around 40 miles, at speeds of up to 87 mph. It would be an easy fit in the GLA, though the battery pack positioning around the rear axle would preclude the use of 4Matic four-wheel drive. That’s likely to be a sacrifice most buyers would accept for the economy gains it would bring.\ 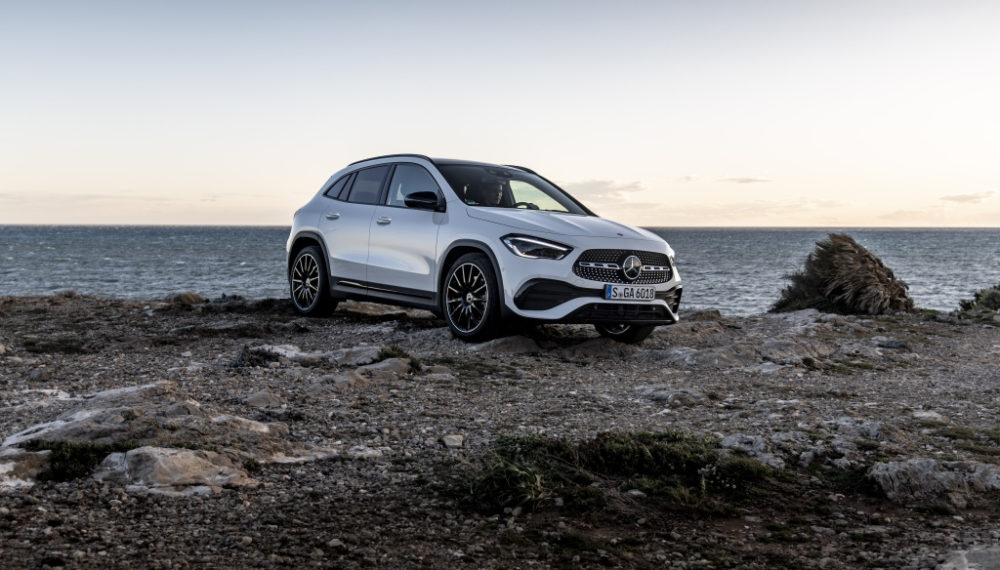 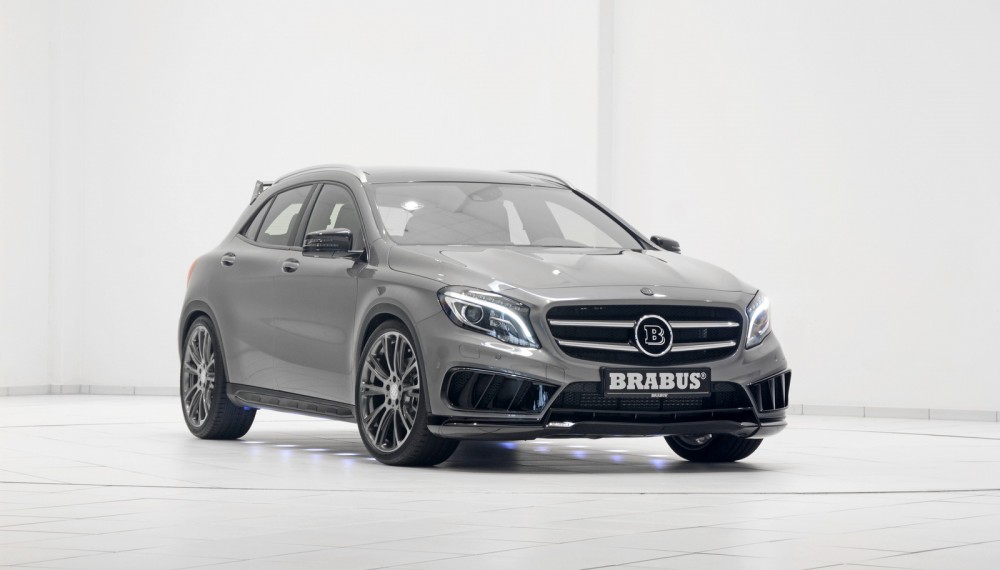 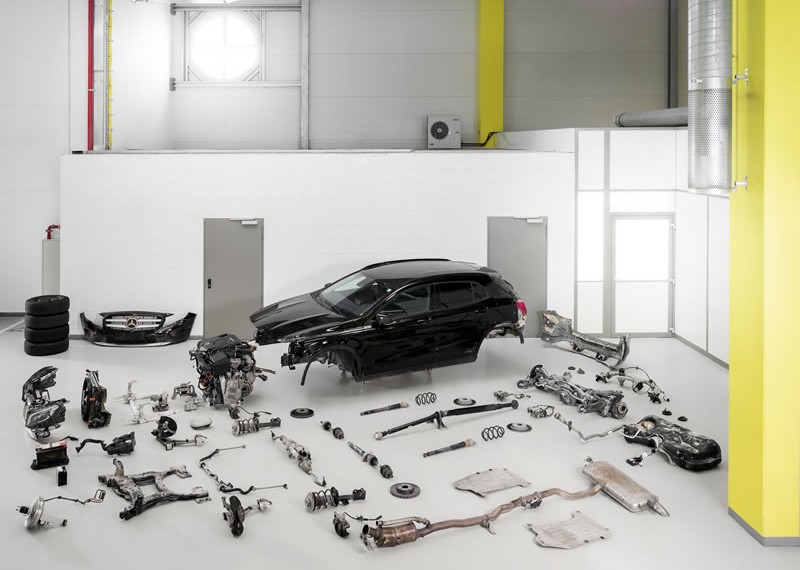 How the New Mercedes-Benz GLA Was Tested