What Happens When you Combine AMG and Bicycles

AMG, the performance brand within Mercedes-Benz, and Rotwild, the internationally renowned manufacturer of high-end mountainbikes, are intensifying their cooperation. The mountainbike professionals of the Rotwild team are entering the 2014 mountainbike season with AMG as a new name-giving sponsor. During a team presentation in Affalterbach, AMG general manager Tobias Moers and Rotwild general manager Peter Schlitt introduced the new AMG Rotwild MTB racing team. 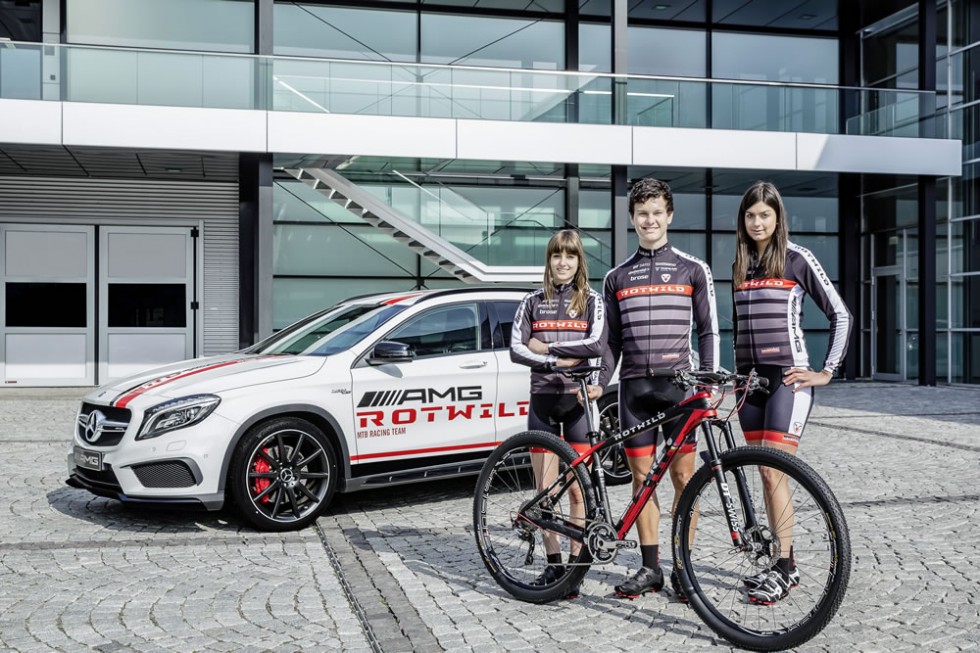 AMG, the performance brand within Mercedes-Benz, and Rotwild, the internationally renowned manufacturer of high-end mountainbikes, are intensifying their cooperation. The mountainbike professionals of the Rotwild team are entering the 2014 mountainbike season with AMG as a new name-giving sponsor. The team consists of the two U23 riders Lukas Baum and Sofia Wiedenroth (left), and the elite lady rider Nadine Rieder (rigth).

Intensive cooperation between the two high-performance brands already commenced last year: to mark their partnership, Mercedes-AMG and Rotwild offered the full-suspension “R.X45 AMG” carbon-fibre bike whose appearance and style was reminiscent of the “Edition 1” variant of the Mercedes-Benz A 45 AMG. This mixture of race technology, unmistakable design and German engineering expertise is also the connecting link between AMG and Rotwild for future projects. Following this first successful project, the two German high-end brands are now going a step further with the presentation of a joint professional mountainbike team.

“Our brand was born on the racetrack – and to this day, our commitment to racing is of central importance to Mercedes-AMG,” said Tobias Moers, general manager of Mercedes-AMG GmbH, during the presentation of the new racing team. “In Rotwild we have found a partner with whom we can also intensify this commitment in the sport of cycle racing. We are therefore looking forward to the coming season with Rotwild, and have our fingers crossed for our joint team in the hope that they will be just as successful on two wheels as our racing cars are on four.” Peter Schlitt, general manager of Rotwild, added: “AMG and Rotwild stand for top performance and efficiency – hand-made in Germany. In the past both premium brands have set standards in their sectors with respect to technical innovations and sporting success. This strong partnership will make us even more of a force to reckon with. We are looking forward to an exciting season, and wish the riders the best of luck.” 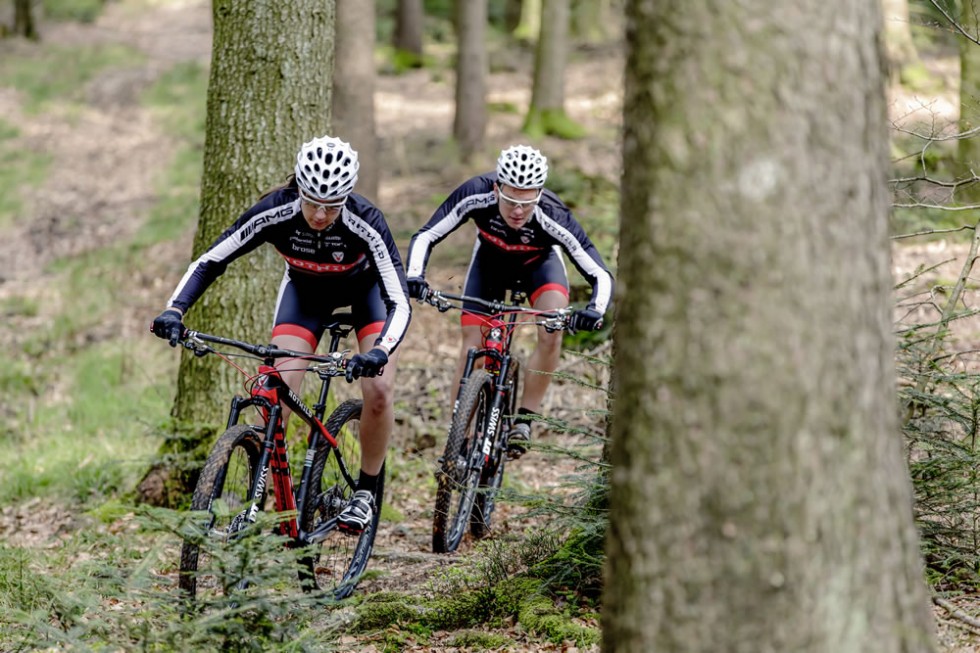 The AMG Rotwild MTB racing team works together with the top brands in the biking sector. Each partner is dedicated to racing, engineering and performance. The mobility needs of the team are also amply catered for. Apart from on their Rotwild R2 racing bikes, the athletes also show a sporty presence on the road with their Mercedes-Benz GLA 45 AMG.

The team consists of the two U23 riders Lukas Baum and Sofia Wiedenroth, and the elite lady rider Nadine Rieder. In the coming season these three will take to the starting line wearing the livery of the new AMG Rotwild MTB racing team. Apart from the UCI MTD Worldcup, the programme of events includes the national and international championships, the German MTB league championship and major European bike festivals. The highlights of the season are the German Worldcup race in Albstadt, the European championship in St. Wendel and the world championships in Hafjell, Norway (1 to 6 September 2014). Following their major successes in the last season, Lukas Baum and Sofia Wiedenroth intend to establish themselves in the U23 class this year. In 2013 Nadine Rieder was the fastest German lady sprinter. Her focus for the coming season is clear: precious metal in the short-distance events and placings in the World Cup.

The team is completed by the Canadian Richie Schley. He is a Rotwild brand ambassador, and is regarded as one of the world’s best freeriders. As a founder of the freeriding movement, he will demonstrate his versatility during selected European endurance races. 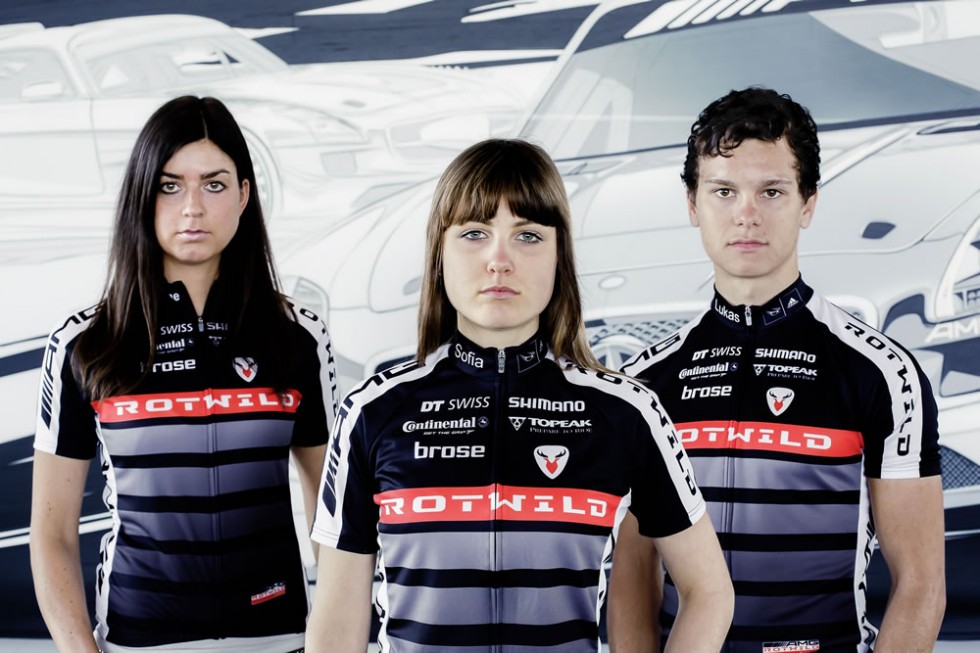 AMG, the performance brand within Mercedes-Benz, and Rotwild, the internationally renowned manufacturer of high-end mountainbikes, are intensifying their cooperation. The mountainbike professionals of the Rotwild team are entering the 2014 mountainbike season with AMG as a new name-giving sponsor. The team consists of the two U23 riders Lukas Baum (right) and Sofia Wiedenroth, and the elite lady rider Nadine Rieder (left).

A portrait: the riders in the team

As a junior in the 2013 season, Lukas Baum was the most successful German mountainbiker. With his triple championship wins – gold in the German championships, the European championships and, to crown it all, the world championship, he celebrated the perfect season with his team colleagues. Following the change to the U23 class, Lukas plans to establish himself here in the coming season and immediately take the offensive. Team manager Danny Herz is quietly confident: “Lukas will not be content to stay with the pack, he always has a surprise in store.” In the World Cup Lukas Baum has his eyes on the Top 10, and on the rostrum for the German championship. The highlight of the season will then be the European championships in St. Wendel, Saarland.

European lady vice-champion and multiple German champion: Sofia’s track record becomes more impressive from year to year. Team manager Danny Herz is enthusiastic: “Sofia’s strength is her riding technique.” Fast bends, blocked stretches or jumps – Sofia has them under control. When preparing for the new season she developed a knee problem, therefore she has added new training routines. She has ambitious plans for the new racing class: achieving the Top 15 in the U23 class is a possibility. The planning for the season is aimed at good results in the world championships in September 2014.

Nadine Rieder particularly excelled in the sprint in 2013. As the fastest German lady rider, she only failed to achieve a podium position by a hair’s breadth in the world championship. She also produced good results in the marathon, however. To develop her strengths even further, multi-talented Nadine trains on skis, in the weights gym, on a dirtbike and with a freerider. Her focus for the 2014 season is on sprinting and cross-country. Her goal is clear: a world championship medal.

The racing bike of the AMG Rotwild MTB racing team

The AMG Rotwild MTB racing team is placing its confidence in the R.R2 HT 29 for the 2014 season. The frame of the ROTWILD 29 race hardtail is based on the high-performance carbon-fibre technology MMT2 – an in-house development by Rotwild. In this modular monocoque construction, the frame is laminated section by section using carbon-fibre modules. The result is an extremely resilient frame designed specifically for racing. The R2 translates the performance ideal to the racetrack. For more power transfer in a race the pedal crank is of maximum rigidity, while the special shape of the handlebar optimises steering precision on technically demanding stretches. Thanks to uncompromising engineering and systematic attention to performance, the R.R2 HT 29 is considerably more than the sum of its parts.

The bike’s list of features also guarantees acceleration and reliability: the Shimano XTR race components combine high-quality materials such as magnesium, carbon-fibre, titanium and aluminium. The suspension and wheels are supplied by the engineers at DT Swiss, and the bikes of the AMG Rotwild MTB racing team are equipped with a specially configured Custom Team suspension fork. Traction, ground adhesion and speed even under difficult conditions are ensured by Continental Race King tyres with a special Race Sport mixture. 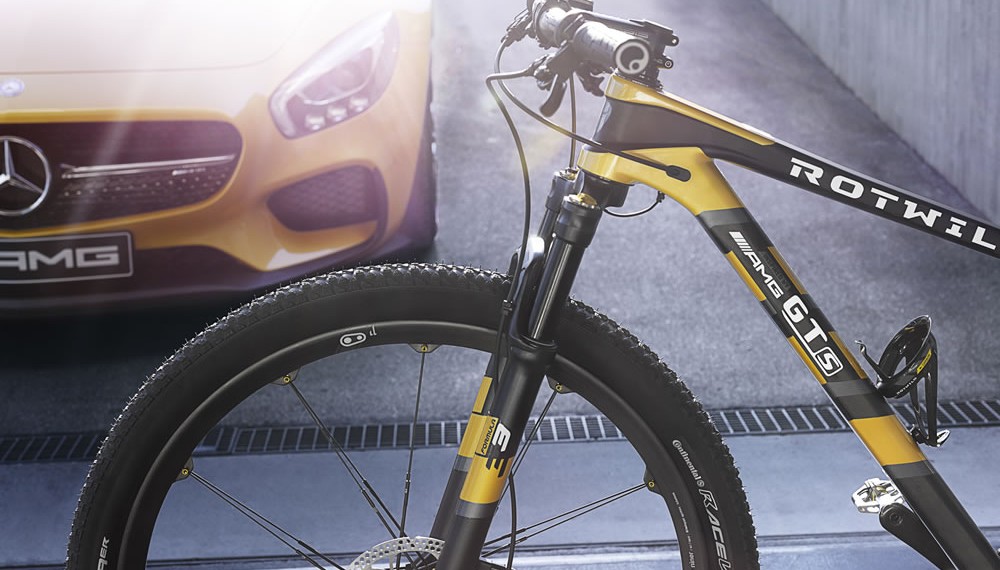 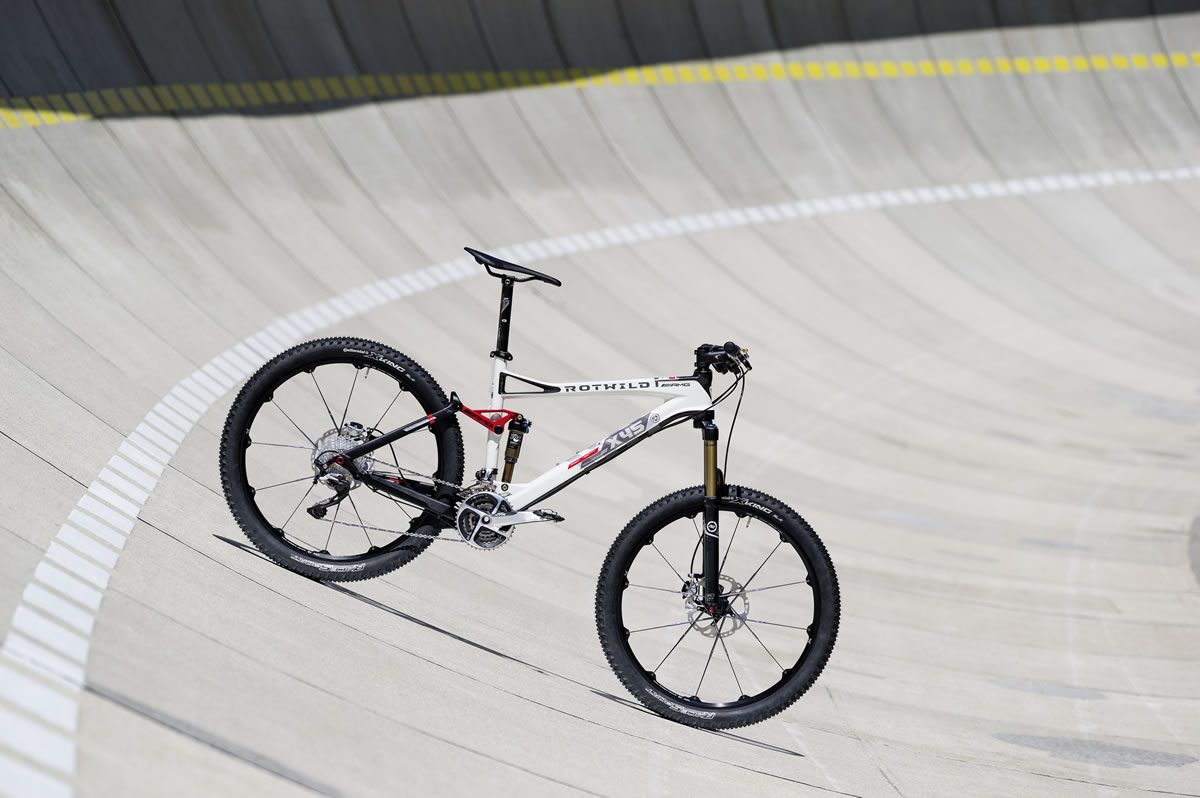 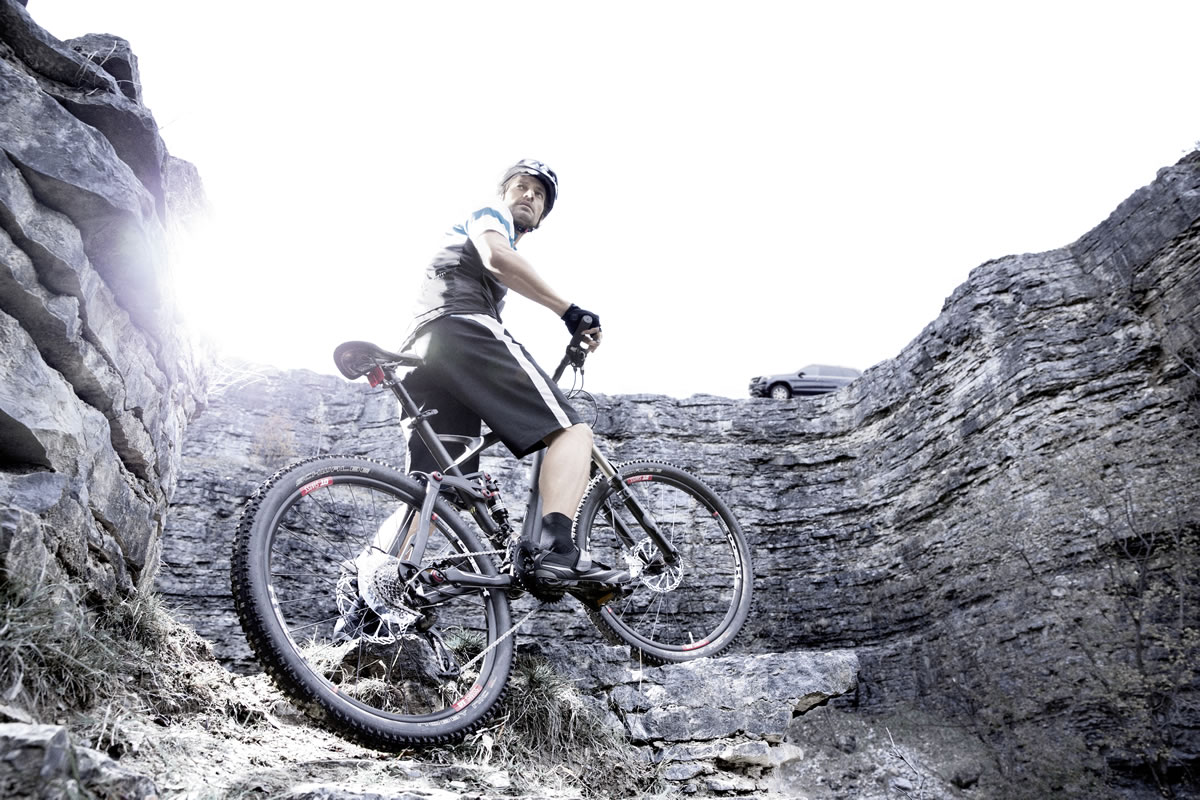 How to Get You Mercedes-Benz Ready for Summer

Big wheels are in, according to the Mercedes-Benz designers