Earlier in the week we began taking a look at the achievements Mercedes-Benz has made in vehicle aerodynamics, in the even that you missed it, click here to read the previous article or read on for Part 2 of our Mercedes-Benz Aerodynamics series.

For almost three decades, the aerodynamic specialists at Mercedes-Benz have been breaking one record after another. At present the brand’s models occupy the top position for aerodynamics in practically every vehicle segment. In its BlueEFFICIENCY Edition, the new CLA-Class has even established a new world record with a Cd figure of 0.22 and wind resistance x A of 0.49 sq. m. Highly sophisticated improvements to both the overall vehicle and detailed features contribute to this good performance. The coming new S-Class will likewise be at the top of its segment for aerodynamic efficiency. Mercedes-Benz models also take the lead in almost all vehicle classes where aeroacoustics are concerned.

1984 saw the debut of cable TV in Germany, the West runway at Frankfurt airport was taken into operation and the Olympic Games were held in Los Angeles. In the same year the W124-series E-Class scored an aerodynamic triumph with a Cd figure of 0.29. It was the first series production saloon to achieve a Cd figure below 0.30, setting a standard by which all saloon cars are judged to this day – and which by no means all can equal.

Since then Mercedes-Benz has established one aerodynamic world record after another – across all vehicle classes and body configurations. The following factors are the secret behind this continued leadership:

One very recent underbody feature is the patented wheel spoiler already mentioned, which was developed with the help of airflow analysis. This seemingly innocuous component reduces undesirable air turbulence in the wheel arches in no less than three ways, by lowering linear turbulence, deflecting the airflow from the wheels and stabilising shear waves with its serrated edge. The wheel spoiler remains effective whatever the suspension level and wheel dimensions.

It was first employed for the B-Class (2011), which with its help achieved a new top Cd figure of 0.26 for series production cars with an enclosed rear. Tail-end turbulence is also considerably reduced. With a basic shape defined according to aerodynamic aspects, the large roof spoiler acts as an airflow breakaway, as do the tail lights. A total of 278,000 CPU-hours of computer time and 1100 hours in the wind tunnel went into the aerodynamic optimisation of the B-Class.

The patented wheel spoiler is also used in the CLA-Class (2013), which has the lowest of all Cd figures at 0.23 – both within the Mercedes-Benz model portfolio and amongst all series production cars. The CLA 180 BlueEFFICIENCY Edition, which is due to be launched in June, will even better this benchmark with a Cd figure of 0.22.

An overview of the key aerodynamic figures for the entire Mercedes-Benz passenger car range:

Models from Mercedes-Benz also take the lead in almost all segments when it comes to aeroacoustics. The new CLA will have the lowest level of wind noise in its segment. Numerous measures contribute to this peak position:

Exterior noise is also minimised by the reduced height of the A-pillar shoulder.

Thanks to its acoustic soft top fitted as standard, when closed the E-Class Cabriolet has one of the quietest interiors in the segment for four-seater premium convertibles with a fabric roof. The soft top’s exceptionally high-quality insulation brings about a clearly noticeable reduction in the interior noise level compared to conventional fabric soft tops. Exterior noise from other vehicles, as well as wind noise, is more efficiently absorbed.

Anti-soiling measures are another aerodynamic discipline – and another area in which aerodynamic specialists at Mercedes-Benz have led the field for many years. Soiling can arise from rain, vehicles travelling ahead and spray thrown up by the vehicle’s own wheels. Keeping windows and exterior mirror lenses as clean as possible, and therefore having the best possible visibility under all conditions, makes a contribution to active safety.

In the wind tunnel the aerodynamic specialists optimise components with the help of a fluorescent liquid which makes the soiling clearly visible. The aim is to direct water away so that the side windows and exterior mirror lenses remain clean. This is influenced by the geometry of the A-pillar with its integral components and the geometry of the exterior mirrors and window frames, or trim strips in the case of frameless doors.

Using the side window as an example, minor geometrical modifications to the mirror housing and detailed refinements using seals and a special water-retaining strip enable soiling to be considerably reduced. The standard at Mercedes-Benz is that in the so-called core visibility area, no spray, no trickles and only individual water drops must appear on the mirror lens. 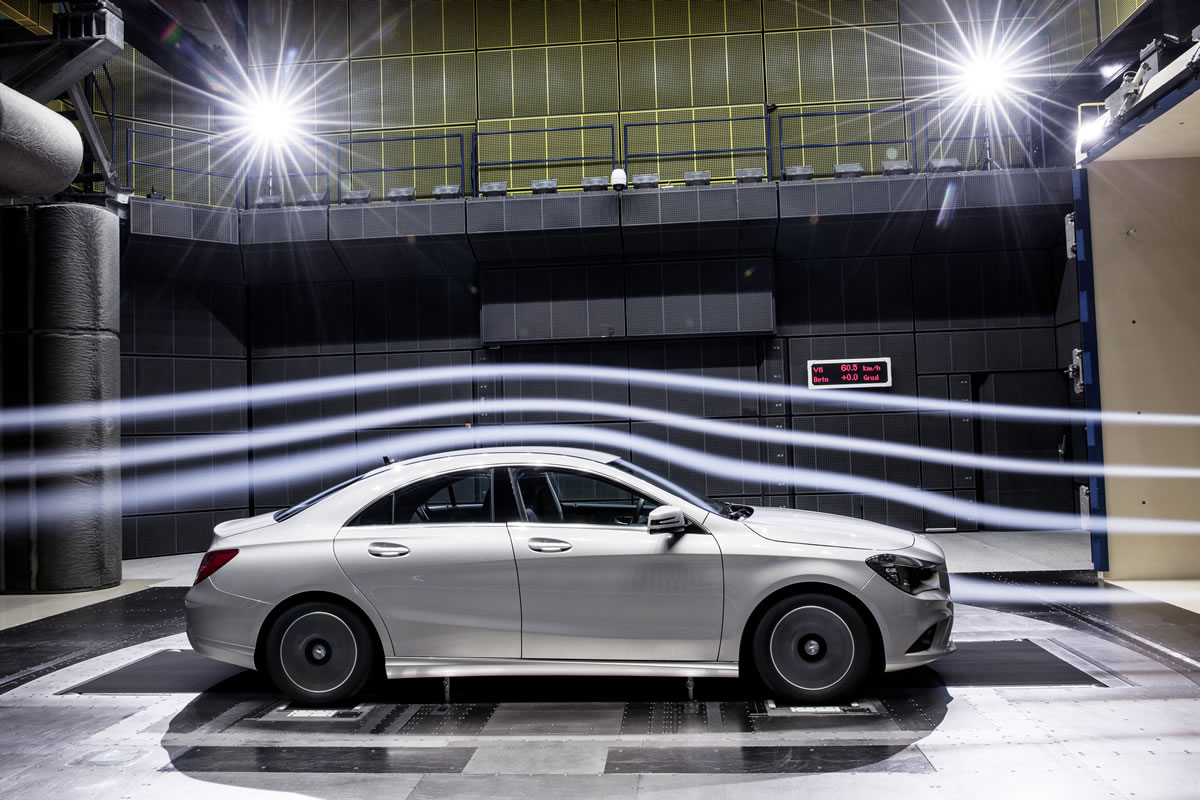