Most Mercedes-Benz vehicles are available with the world’s first seven-speed automatic transmission, which simultaneously improves fuel economy and acceleration as well as making smooth, barely noticeable gearshifts. A number of model families also come equipped with a convenient Direct Select shift lever on the steering column, which provides more convenient Touch Shift operation and at the same time, opens up valuable space on the center console.

Mercedes-Benz has launched two advanced-technology hybrid models – the S400 HYBRID and the ML450 HYBRID – both powered by a combination of electric motors and an Atkinson-cycle version of the 3.5-liter V6. Both vehicles come with a modified automatic transmission that features one or two electric motors integrated within the transmission. Characterized as a “mild hybrid,” the S400 HYBRID has a single 20-horsepower electric motor inside the transmission. The ML450 HYBRID is considered a full hybrid, with two electric motors, each serving a specific purpose. Dedicated to pulling away under electric power, the motor on the output shaft of the ML450 HYBRID generates 80 hp and 192 lb.-ft of torque. Located closer to the gasoline engine, the other motor is set up specifically for acceleration and is rated at 83 hp and 173 lb.-ft of torque.

Award-Winning MCT Sports Transmission – The Best of Both Worlds

AMG is taking the automatic transmission another major step forward. With a start-up clutch that replaces the torque converter, the new seven-speed MCT sports transmission provides the direct feedback of a manual transmission with the total convenience of an automatic, offering impressive versatility and even faster shift times. Thanks to its low rotational mass, the start-up clutch helps the transmission respond instantaneously and dynamically, with no slip.

In Comfort mode, smooth shifts coupled with a “soft” accelerator response are set up for smooth power transfer. In Sport mode, the engine and transmission interact quicker – upshifts and downshifts take place at higher engine speed. Gearshifts are around 20 percent faster than in Comfort mode. Switching to Sport Plus cuts another 20 percent off shift times, while the sportiest mode, Manual, reduces shifting times by another 10 percent – a total reduction of 50 percent compared with Comfort mode. In Manual mode, the gearshifts take only 100 milliseconds.

The rev-matching function provides precisely computerized matching of engine speed with every manual or automatic downshift, and is active in the “S” (Sport), “S+” (Sport plus) and “M” (Manual) modes. Not only does this smooth downshifting make driving more fun, but it also minimizes jerking, a special benefit when braking into a curve.

The E63 AMG sedan and the SL63 AMG roadster even come with a Race Start feature, which helps maintain full-throttle acceleration and optimal traction during race competition. After selecting the Race Start mode, the driver steps on the brake with the left foot and pushes the ESP Sport switch. When confirmation appears in the central display, the driver reconfirms Race Start by pulling the upshift paddle once, flooring the accelerator and releasing the brake. Engine speed is set automatically, and the car launches with full acceleration.

In general, seven gear ratios provide a wider spread of ratios between first gear and top gear and, at the same time, allow the engine to run in its most favorable rev range more often. It also gives the electronic control unit more flexibility in terms of maximizing fuel economy and making the transmission’s reaction time extremely fast.

Unlike many transmissions, the seven-speed transmission will skip up to four gears if necessary when the driver downshifts, shifting directly from seventh to fifth, for example, or even sixth to second. This helps the transmission choose the right gear ratio for quick acceleration and ensure almost imperceptible shifts in the process.

The seven-speed automatic also benefits from new “shift-by-wire” electronic control technology. The S- and E-Class sedans, CL coupe and the GL-, M- and R-Class sport utilities feature the Direct Select shift lever – a small stalk on the right side of the steering column.

Thanks to the latest electronic technology, Direct Select makes shift control simpler than ever. Lift the stalk up for reverse, push down for drive, and push a button on the end for park. Once underway, pushing either one of the shift buttons on the “back” of the steering wheel provides Touch Shift manual gear changes.

Though gears can be manually selected, computer control prevents downshifts that would cause the engine to over-rev. The system is user-friendly, not to mention providing a clean, open look to the center console.

The heart of all Mercedes-Benz automatic transmissions is a high-performance micro-processor, which is designed so the transmission shifts as the driver expects and wishes it to react. Continuous electronic networking with the engine and chassis management systems allows the transmission computer to adapt to a wide variety of driving situations, and even to the driver’s style.

By comparing road speed changes and load, or throttle opening, the transmission computer can instantly discern uphill and downhill grades, and adjust shifting as a result. It delays upshifts on descents (for engine braking), as a driver is likely to do with a manual transmission. The micro-processor even considers cruise control and engine temperature in the shifting decision.

The computer also measures how fast the driver presses and releases the accelerator pedal. If the pedal is pressed relatively quickly, the transmission is more likely to downshift, for instance during sporty, more spirited driving, while upshifts are less likely when the pedal is released quickly. With normal pedal operation, shifts occur according to a basic program aimed at getting the best fuel mileage.

The transmission computer is also networked to the ABS and traction control systems (and to yaw and steering sensors from the standard ESP stability control system) so that it can recognize cornering and low-traction conditions. Based on this data, the transmission may delay or hasten a gearshift to ensure that it creates no negative effect on vehicle stability or traction control. Not only does the transmission computer adjust shift feel according to engine speed and load (smooth shifts during leisurely driving, crisper shifting with more spirited driving), but it’s even able to reduce engine power for a split second (by retarding ignition timing) to ensure smooth gear changes.

Mercedes-Benz models produced by AMG, the company’s in-house high-performance division, are fitted with paddle shifters inspired by the world of Formula 1 racing. Mounted on the steering wheel, the paddle shifters work in conjunction with an AMG SPEEDSHIFT transmission to provide up to 35 percent faster gear changes than a conventional automatic.

Like all Mercedes automatics, SPEEDSHIFT will automatically downshift under heavy braking, selecting the optimal gear for the situation. Also, by holding the gear lever to the left, the transmission will choose the best possible gear for maximum acceleration in any situation. The AMG SPEEDSHIFT transmission will also hold a selected gear under high cornering loads, avoiding upshifts in mid-corner. As well, a special lightweight torque converter will lock up in all forward gears.

Shifting with Pleasure: The Six-Speed Manual

Mercedes-Benz offers a six-speed manual transmission for the C-Class sport sedans and SLK coupes/roadsters. The manual transmission offers extra driving fun for those who prefer a stick, as well as maximum control, with short gear lever throws for quick shifting. With an extra gear (as compared to a five-speed manual), Mercedes engineers narrowed the ratio gaps between each gear and made a slightly shorter first gear for quicker off-the-line acceleration, while maintaining an overdrive sixth gear for quiet and economical highway cruising. Shift effort is low, thanks to multiple-cone synchromesh, easing cross-gate shifts from second to third and from fourth to fifth. The reverse lockout is overcome by lifting the shift lever when selecting reverse. 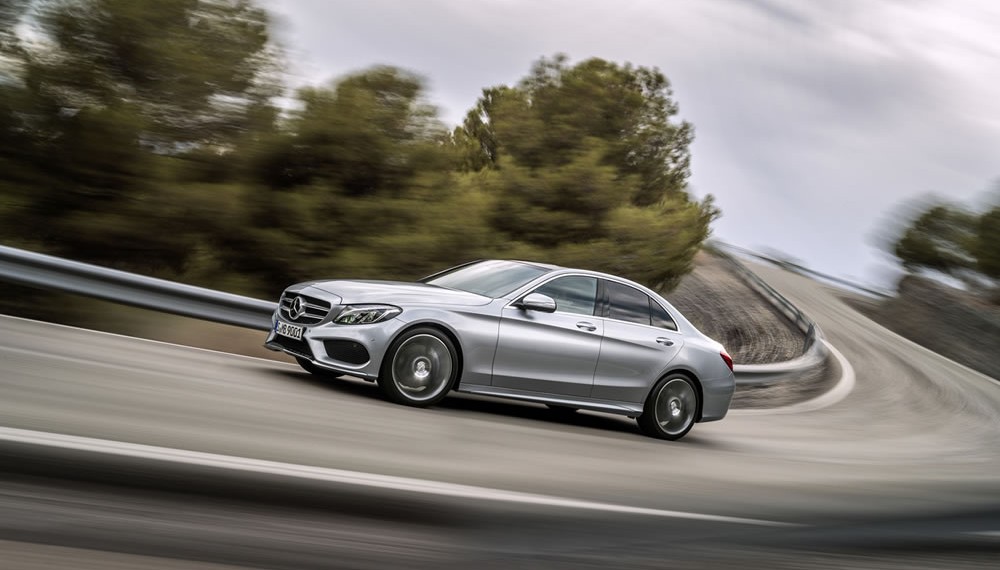 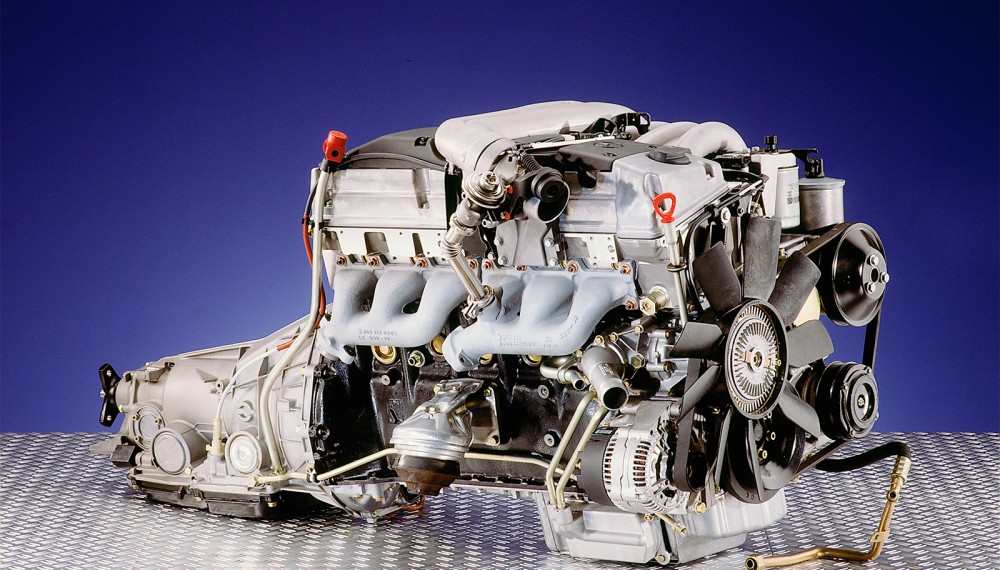 Mercedes To Bring Back Straight-Six Engines 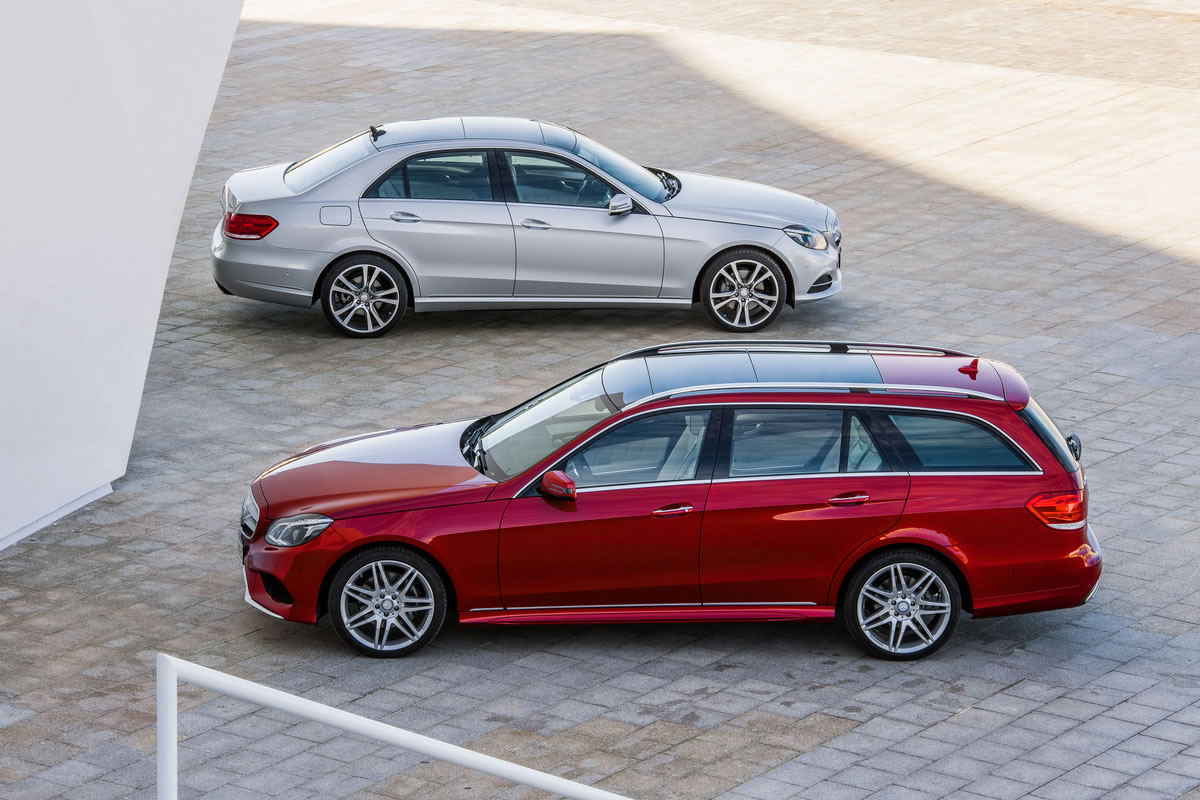