In the new generation of the CLS-Class, Mercedes-Benz is using the new technology of MULTIBEAM LED headlamps for the first time

In the new generation of the CLS-Class, Mercedes-Benz is using the new technology of MULTIBEAM LED headlamps for the first time. High-resolution precision LED modules, each with 24 individually controlled high-performance LEDs, automatically illuminate the road with a hitherto unsurpassed, precision-controlled distribution of exceptionally bright light – without dazzling other road users. A camera positioned behind the windscreen delivers the information with which four control units the ideal light pattern 100 times per second. The anticipatory camera-based active light function on bends and the new navigation-based light function for roundabouts are also unique. The Mercedes-Benz CLS-Class already became an icon of lighting technology back in 2010, incorporating dynamic all-LED high-performance headlamps featuring adaptive light functions as a world first in a production automobile. 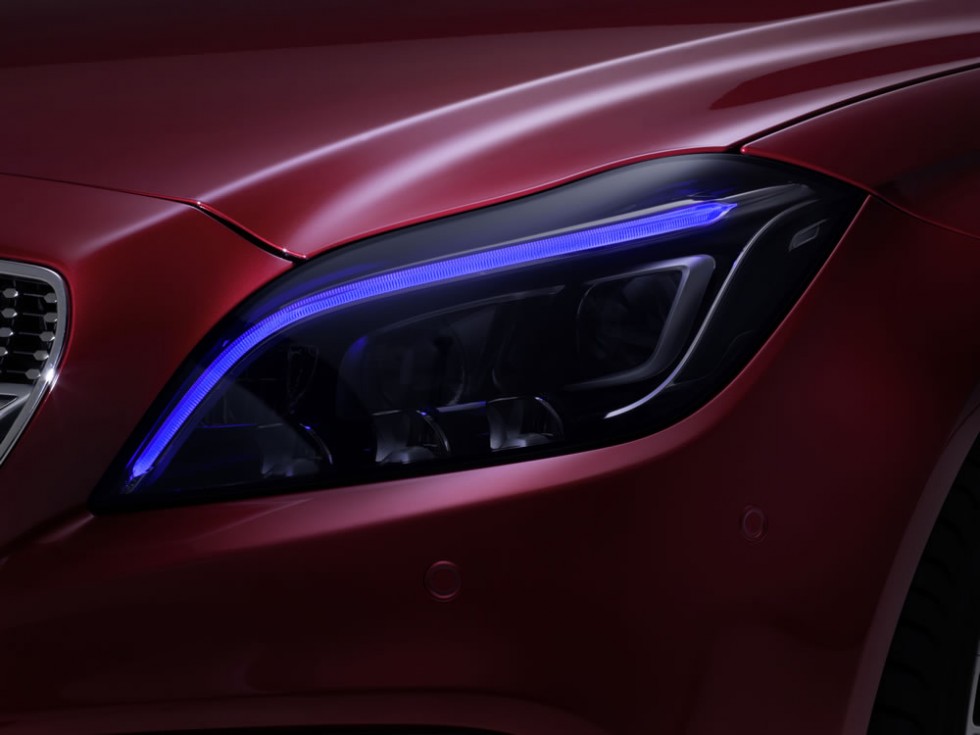 “The first LED headlamps with all the adaptive functions of the Intelligent Light System have been available to our customers since 2010 in the CLS”, says Prof Dr Thomas Weber, Member of the Daimler Board of Management responsible for Group Research and Head of Mercedes-Benz Cars Development. “With MULTIBEAM LED technology the headlamps now are able to react even more quickly, more precisely and individually to changing traffic conditions. On top of this, there are expanded functions of which a driver will become directly aware, such as anticipatory camera-based curve recognition with the active light function. With such features Mercedes-Benz once again is demonstrating its role as an innovation leader in the automobile industry.”

The headlamps of the new generation of the CLS are all-LED headlamps and combine the merits of state-of-the-art lighting technologies to form the MULTIBEAM LED technology. They are able to automatically and optimally adjust the light distribution more precisely than ever before to virtually any road and traffic conditions, always ensuring extensive and bright illumination of the road and its edges without dazzling other drivers. They therefore offer a new level of safety which benefits other road users too.

The crucial element is the new dazzle-free main beam. The purposefully further advanced camera-based Adaptive Highbeam Assist Plus system from the S-, E- and C-Class creates the necessary prerequisites. Using the camera positioned behind the front windscreen it detects oncoming traffic or vehicles in front, and mechanically masks them out in the light cone of the main beam so that the drivers are not dazzled. Consequently, the high-beam headlamps can be left on at all times, to use their full range without irritating or even endangering other road users.

The new MULTIBEAM LED headlamps go an important step further. They use a very fast responding high-resolution precision LED light module as a light source, which features 24 individual high-performance LED chips. Each can be controlled electronically and independently of the others. This allows the light distribution from the right and left headlamps to be controlled separately and adapted highly dynamically to the traffic conditions with a high level of precision. This makes it illuminate individual areas of the road in highly targeted fashion. Combining the light source with the proven mechanical LED technology, means the headlamp control technology not only increases the precision of today’s light sources and sets a gap with a minimal width for the main beam, but it also generates a new dimension in light output in partial high-beam operation. Compared with the systems on the market today, the MULTIBEAM LED headlamps have up to 2.5 times the partial high-beam light output. This increase is made possible by the sophisticated control electronics in conjunction with the new matrix light source of the precision LED module.

A camera on the windscreen supplies the system with the information it needs about the constantly changing traffic situation and is also used by other assistance functions. Four control units per vehicle calculate the ideal light pattern 100 times per second and activate all 24 high-performance LEDs in lamp module individually.

The additional light output of the technology in the MULTIBEAM LED headlamps is not only used to increase the performance in partial high-beam operation, but also for high-beam operation. Even though the latter is activated significantly less due to traffic density, the range of the high beams was increased by about 20% to about 485 m.

The active light function illuminates bends before they are entered

In addition to the powerful high-resolution precision main-beam module, each MULTIBEAM LED headlamp contains a further module for the low-beam headlamp which is equipped with four LEDs. It can be swivelled outward additionally by as much as twelve degrees to provide an anticipatory camera-based active light function – a possibility never realised before. Camera-based, the module swivels toward the bend before the driver has even turned the wheel, thus providing optimum illumination of the bend early on. According to the situation it also swivels back to the straight-ahead position before the bend ends. This allows the driver to identify dangers earlier when entering and exiting bends. The anticipatory control allows an additional range of between 30 and 60 m depending on the traffic situation.

No dark zone on roundabouts

The new and to date unique light function for roundabouts is navigation-based. It activates the cornering light function to the left and right before entering the roundabout to ensure maximum visibility at an early stage.

The LED technology offers many advantages: the light from the very bright LED headlamps is closer to daylight and therefore perfectly attuned to the human eye. Studies have shown that the closer the colour of artificial light is to daylight, the less the strain on the eyes. With a colour temperature of 5500 kelvin, LED light is closer to daylight (6500 K) than xenon light (4200 K). The powerful single-chip LED diodes of the MULTIBEAM LED headlamps and their high lumen/watt output also contribute increased efficiency and with an average useful life of about 10,000 hours will also last five times longer than a xenon lamp.

2010 in the CLS: a breakthrough in LED technology

2010 saw a breakthrough in LED technology. With the launch of the CLS, Mercedes-Benz became the first automotive manufacturer to offer a production model featuring dynamic all-LED high-performance headlamps incorporating all the adaptive light functions of xenon systems: country mode, motorway mode, fog light, active light function and cornering light function. The lighting specialists at Mercedes-Benz were also able to combine this LED technology with the innovative Adaptive Highbeam Assist system for the first time, leading to a completely new level of safety at night.

In the spring of 2013 the new E-Class set standards in terms of light features: as standard it boasts both low-beam headlamps and daytime driving lamps which make use of LED technology. All in all, the high-efficiency low beams of both headlamps together consume just 34 watts and are thus much more efficient than halogen (120 watts) and xenon lamps (84 watts, all figures per vehicle). This means that it is possible to save up to 0.05 litres of fuel per 100 kilometres, or 2.1 grams of CO2 per kilometre, compared with a vehicle with halogen low-beam headlamps. LED high-performance headlamps are available as an option for the first time in this class.

The next step followed with the new S-Class. Mercedes-Benz continued to expand its pioneering role in the automotive lighting sector: for the first time the new S-Class is fitted exclusively with LED headlamps and no longer uses conventional light bulbs – almost 500 LEDs are now responsible for illuminating the road, the vehicle, the interior and the luggage compartment. New, powerful single-chip LEDs and a newly developed projection module in the headlamp, where light rays are diverted, reflected and projected outwards, make a significant contribution to the increased efficiency.

New optional functions expand the performance spectrum of the LED headlamps of the S-Class and now also of the E- and C-Class. Adaptive Highbeam Assist Plus allows the high-beam headlamps to be kept on permanently while driving by masking out any other road users detected in the beams’ cone of light. If the camera-based system detects an oncoming vehicle or a vehicle in front, a mechanism in the headlamp module masks the portion of the LED headlamp’s cone of light where there are other vehicles, to prevent their drivers from being dazzled. Consequently, the driver can leave the high-beam headlamps on at all times and use their full range without irritating or even endangering other road users. There is no need to switch them on and off manually, resulting in a significant increase in the overall driving time with high beam. Possible glare caused by increased use of the high beams and highly reflective signs at the side of the road are also detected and prevented by dimming the headlamps accordingly.

Considerate to others: tail lights with automatic intensity control

Mercedes-Benz vehicles are considerate to other road users also thanks to the so-called multi-level functionality of the tail lamps, with which another world first was achieved in the E-Class and now also in the S- and C-Class. With this, the brake lights and indicators are operated with varying light intensity, depending on the driving situation and ambient lighting (day/night).

If the Mercedes driver presses the brake pedal while stopped at traffic lights at night, for instance, the brightness of the brake lights will be automatically dimmed to avoid dazzling anyone behind. The light distribution is broadened to ensure the lights do not become too dim and that they continue to fulfil all legal requirements, of course.

One charming feature, used for the first time in the C-Class, is that the new MULTIBEAM LED headlamps of the CLS Coupé and CLS Shooting Brake in addition to providing daytime driving lamps, side lights and turn indicators via fibre-optic cable, also welcome the driver by casting a pleasant blue light when the vehicle is unlocked. 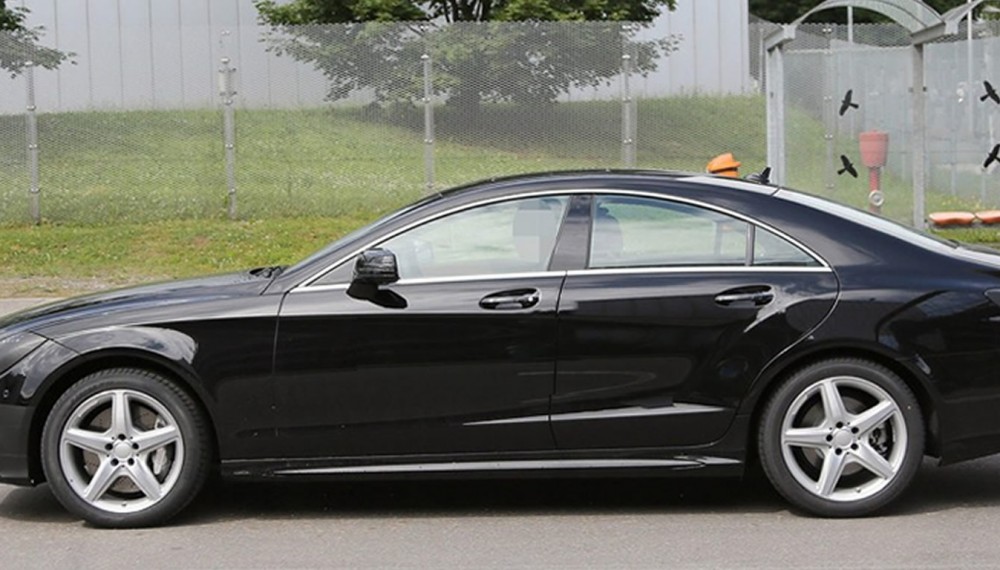 2015 Mercedes CLS Spied As Never Before 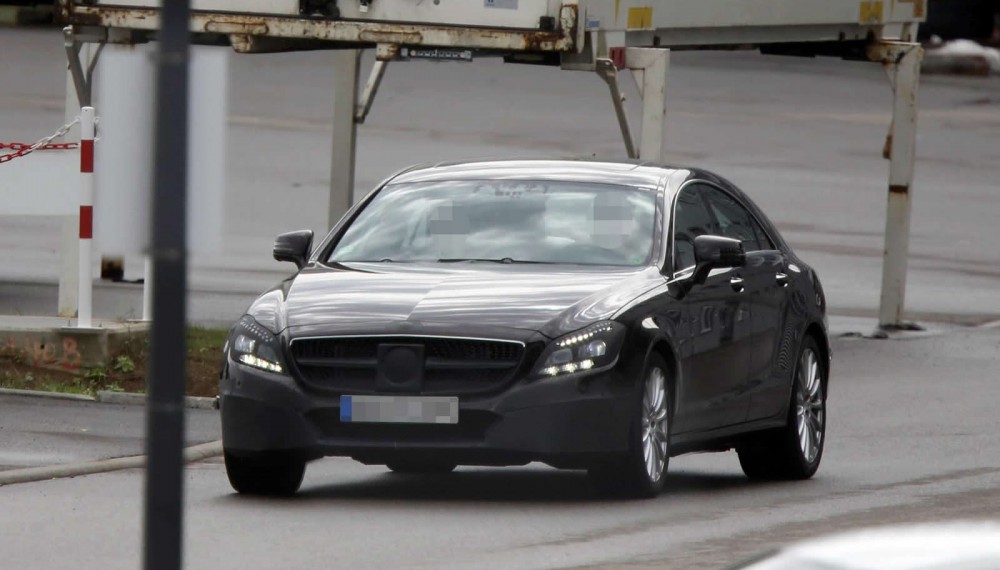 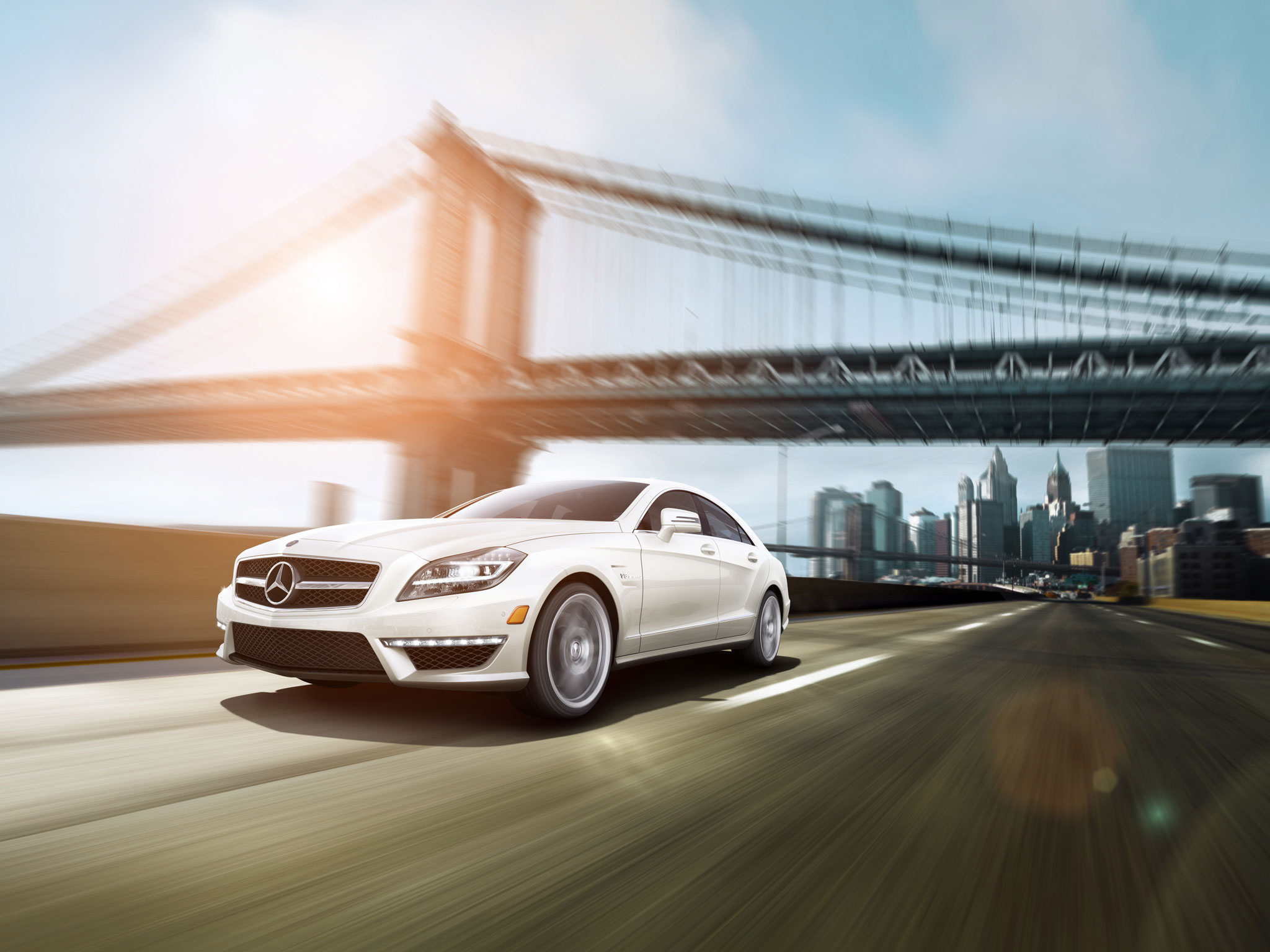 If you think you know the AMG brand, check out our AMG slideshow, full of interesting AMG facts