Two cars fitted with a Daimler two-cylinder V-engine shared first prize in the world’s first motor car race in 1894 and a Benz vehicle received 5th prize. The reliability test drive from Paris to Rouen paved the way for the unique tradition of 120 years of Mercedes-Benz motor sport history. But the winners of the race from Paris to Rouen were not only the vehicles from Panhard & Levassor and Peugeot, but the motor car with a combustion engine per se. After all, on the 126-kilometre-long route, the motor vehicle powered by the fast-running Daimler engine demonstrated its superiority over road-going vehicles with other propulsion systems. This magic moment would change mobility for ever: “How can you travel other than in an motor car?”, is how on 23 July the newspaper “Le Petit Journal”, organiser of the competition, enthusiastically summed up the result of the competition, as it looked forward to the future with excitement and anticipation.

The first motor car race in history, which took place on July 22, 1894 over the 126-kilometre route from Paris to Rouen, was not just about speed. Rather the aim was for vehicles to demonstrate their excellent road-going credentials as part of the competition organised by the French daily newspaper “Le Petit Journal”: the vehicle to win would be the one that most effectively fulfilled the criteria, “to be easy to operate for the competitors without any danger and not too expensive to run”.

Safety, ease of operation, and transparent costs: those were the specialities of the motor car with fast-running combustion engine, at that point just eight years old, compared to steam technology in particular. And so the brands Panhard & Levassor and Peugeot took away the (shared) first prize of 5,000 francs for their vehicles equipped with Daimler engines. The jurors singled out Daimler’s innovativeness as especially noteworthy: “The Daimler engine, developed by a skilled engineer from Württemberg; Mr Daimler – who was present yesterday in Rouen to share in the triumph of his work – has turned petroleum or gasoline fuel into a practical solution.” 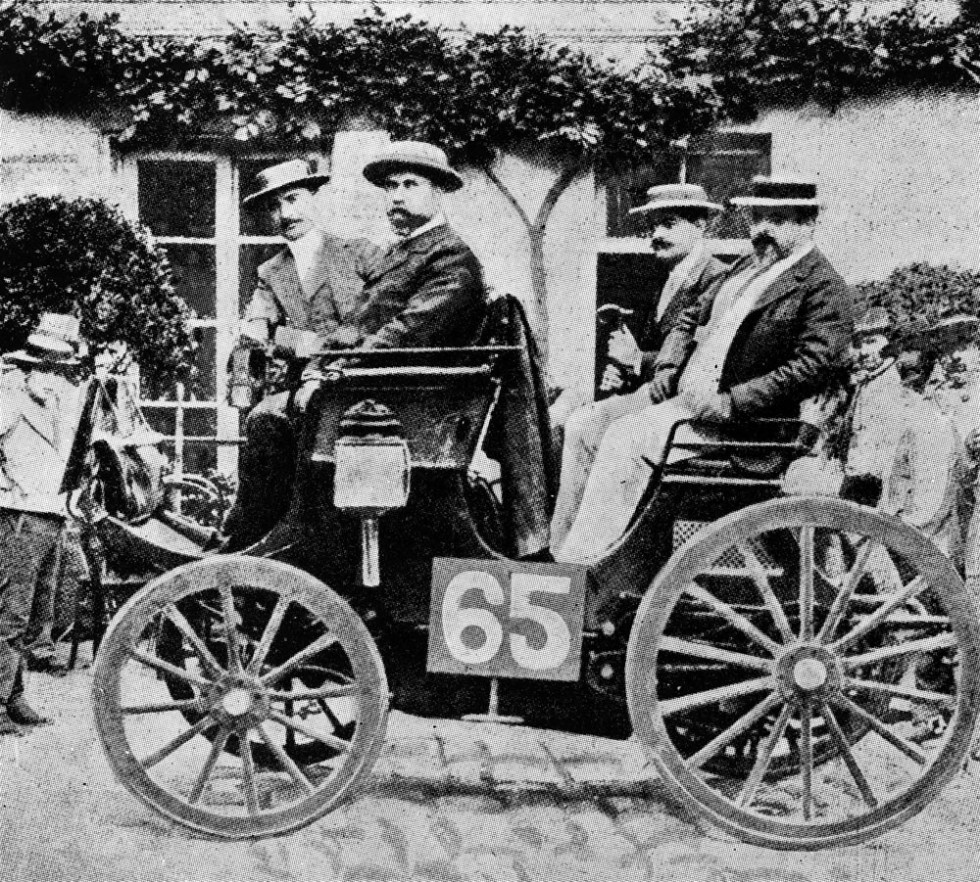 The first car race from Paris to Rouen, 22 July 1894. The Peugeot from Albert Lemaître (starting number 65), pictured on the left-hand rear seat Adolphe Clément. The Peugeot with an engine manufactured under licence from Daimler was the first vehicle with a combustion engine to finish the race, crossing the line in second.

Birth of motor sport alongside the Bois de Boulogne

21 vehicles in total were approved for the race from Paris to Rouen. They had to go through test drives on the three days before the final competition to qualify to take part in the long-distance race. From 7 a.m. on July 22, 1894, the vehicles lined up on the starting grid at the Porte Maillot in the Paris district of Neuilly sur Seine, located right next to the Bois de Boulogne. The start on the Boulevard Maillot was scheduled for “8 o’clock sharp”. The steam tractor of Count de Dion with its single-axle passenger trailer in tow was the first vehicle to set off at 8.01 a.m., with the remaining vehicles following at intervals of 30 seconds.

The road had not been specially cordoned off for the reliability test drive. The traffic proved very heavy particularly after the start because the extensive reporting in the run-up to the race had attracted thousands of spectators; to compound matters other vehicles were mingling among the starters: “The convoy is led, flanked and pursued by numerous cyclists, also by a number of vehicles with a mechanical propulsion system which are tackling the route as amateurs.”

The motorised spectators also included Gottlieb Daimler and his son Paul, who were excitedly following this day that would be so important for their engine. 20 years later, Paul Daimler reminisced in an article for the “Allgemeine Automobil-Zeitung” (AAZ) on the diverse starting line-up: “The race cars, with disparate shapes, types and sizes, heavy steam carriages with trailers with huge wheels, competed with the lightest steam-powered three-wheelers, and these in turn with petrol-engined cars.  We ourselves accompanied the race in our own vehicle. It was a curious spectacle seeing these disparate vehicle types racing against each other: the stokers on the heavy steamers, dripping with perspiration and covered with soot, working hard to put on fuel; the drivers of the small steam-powered three-wheelers keeping a watchful eye on the pressure and water level in the small, skilfully fitted tubular boiler and regulating the oil firing; and then in contrast to all that the drivers of the petrol- and paraffin-powered cars sitting calmly in the driver’s seat, operating a lever now and again, as if they were simply out for a pleasure trip – an utterly peculiar image of contrasts that has remained with me ever since.”

From Paris the route took them to Mantes where the competitors stopped for lunch. Suitably refreshed, it was then on towards Rouen where the first vehicle (de Dion) arrived at 5.40 p.m. Two Peugeot cars followed with the 2.6 kW (3.5 hp) Daimler two-cylinder V-engine (Albert Lemaitre/5.45 p.m., Auguste Doriot/5.50 p.m.) and two other Panhard & Levassor vehicles, which were also powered by Daimler engines (Paul Panhard/6.03 p.m., Emile Levassor/6.30 p.m.). The “Système Daimler” was a two-cylinder V-engine built under licence in France according to Gottlieb Daimler’s original plans.

17 out of the 21 starters crossed the finishing line – 9 of them fitted with Daimler engines. The engineer Emile Roger, starting in a Benz vehicle with an output of 3.7 kW (5 hp), was the 14th to cross the finishing line. In 1888, he became the sole agent for Benz vehicles and engines in France, but deliberately chose to avoid mentioning the origins of the Mannheim-based motor car when registering for the competition from Paris to Rouen in 1894. Roger took 5th place in the competition and in the final report, which was published in the “Le Petit Journal” on July 24, 1894, was singled out for praise by virtue of the “successful improvements to the motor car with petrol engine”.

While Roger imported complete Benz vehicles, Daimler initially provided engine technology expertise for the French motor car manufacturer: as early as 1887, Gottlieb Daimler was negotiating with Edouard Sarazin from Paris about marketing his developments on French territory. Sarazin in turn agreed with businessman Emile Levassor that the latter would build the Daimler engines under licence. Following Sarazin’s untimely death, his wife Madame Louise – she would later marry Levassor – carried on the business, thus laying the foundations for the French motor car industry. The engines built by Panhard & Levassor from 1889 onwards accelerated the development of the motor car in France. 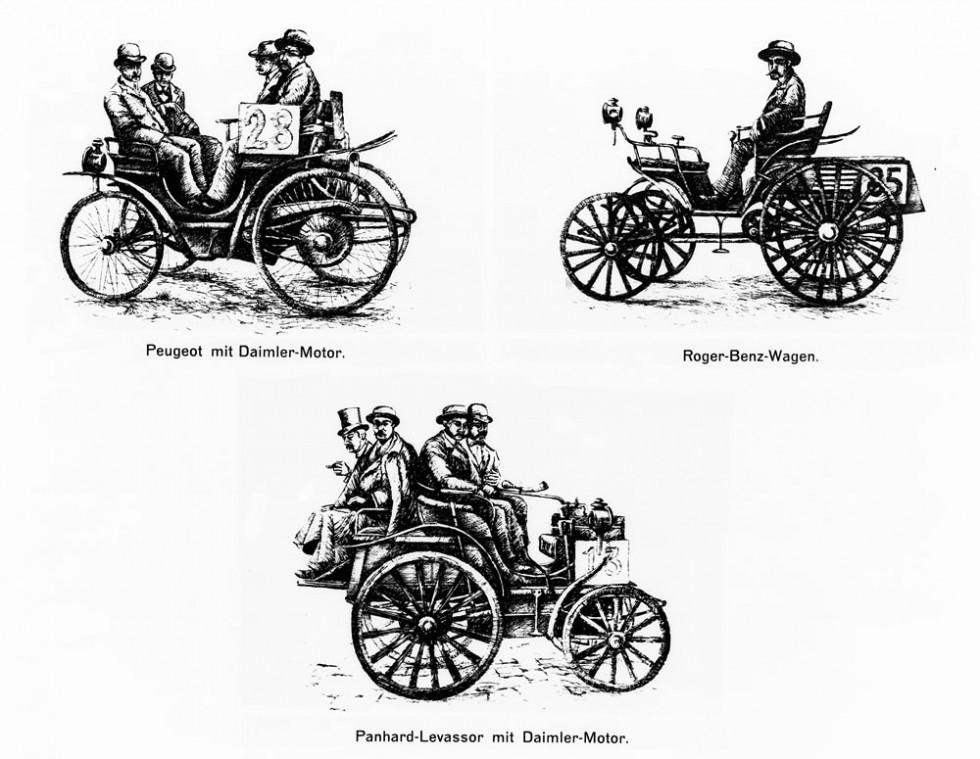 In the world’s first car race from Paris to Rouen on 22 July 1894 over a distance of 126 kilometres, cars powered by Daimler engines won first prize. A vehicle from Benz also successfully took part in the race and was awarded fifth prize.

The motor car triumphed over the steam carriage

The steam-powered tractor of Count Jules-Albert de Dion, which from a modern-day perspective seems utterly bizarre, may well have completed the route in the shortest time, but fulfilled the rules and regulations much less effectively than the more sophisticated motor cars. Other steam-powered vehicles also took part in the competition; three of these, however, failed to complete the 126-kilometre route with its poor road conditions.

Races like the “Concours du Petit Journal” held in 1894 have a long tradition in France: Pierre Giffard, publisher of the “Petit Journal” and inventor of the automotive reliability test from Paris to Rouen, also organised the Paris–Brest–Paris cycle race (1891) and the Paris marathon (1896). Yet the motor car race in July 1894 to find the most reliable vehicle took on a dimension that went beyond sport – it was about redefining mobility on the road, explained the “Petit Journal” in December 1893 with its announcement of the “Competition for horseless vehicles, with mechanical propulsion” (« un concours de voitures sans chevaux, à propulsion mécanique »).

The competition was designed to help accomplish one of the great unsolved tasks faced by engineers: “At the end of the 19th century, human inventiveness, which in less than 100 years has created steam power, gas, electricity, and other types of propulsion, has still not found a mechanical process for replacing horses as the propulsion for vehicles.”  Viewed from this perspective, the race from Paris to Rouen marked both the birth of motor sport and the final of the competition between the various propulsion systems – from which the motor car would emerge as the undisputed winner. And quite incidentally, the future name of the vehicle would be coined in the media reports: whereas the “Petit Journal” was still referring to “horseless carriages with mechanical propulsion” in 1893 (« voitures sans chevaux, à propulsion mécanique »), the reporters in July 1894 were already writing about “voiture automotrice” and “automobile” in reference to the race.

Various vehicles, each powered with Daimler engines, notched up important victories in the ensuing years, thus underpinning the excellent reputation of cutting-edge technology from Stuttgart – including in the race from Paris to Bordeaux in June 1895, which was regarded as the first motor car race in the proper sense. Many other legendary race victories recorded in France form part of the magic moments of 120 years of Mercedes-Benz motor sport: these include Daimler’s dominance in the Nice Race Week 1901, which gave rise to the brand name Mercedes. 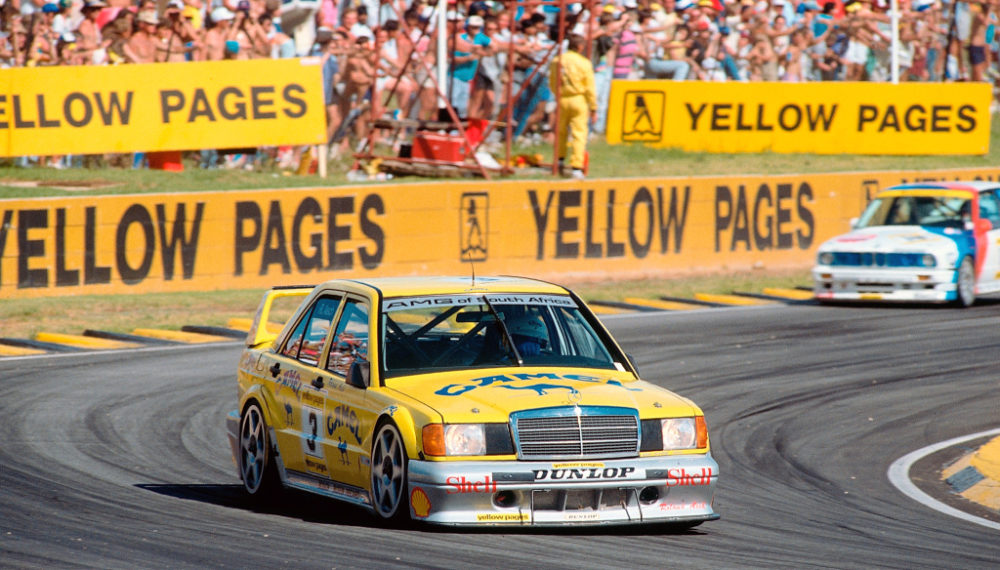 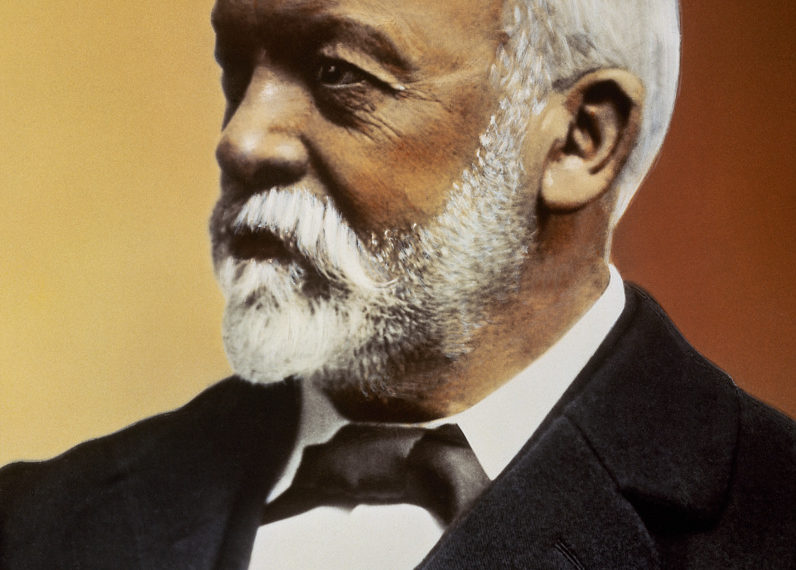 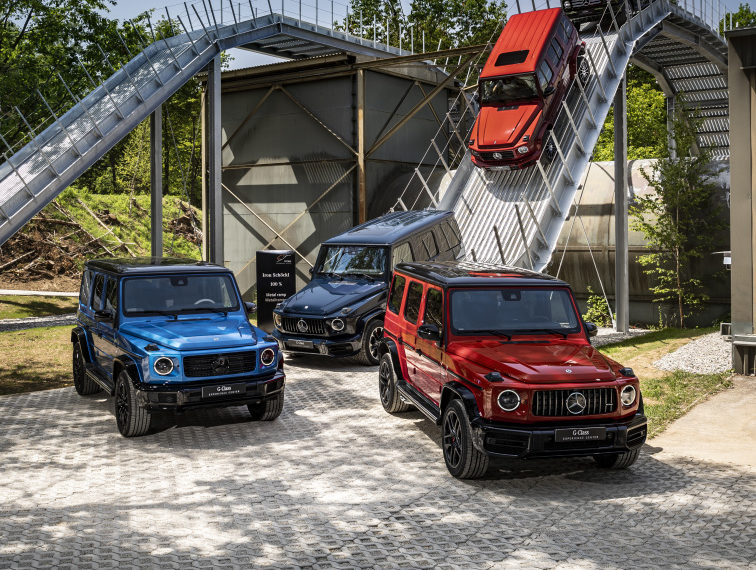