The 2022 Mercedes-Benz C-Class is a sedan that, in its base form, will retail for about the same amount as a mainstream Ford F-150 XLT SuperCrew, but which has an interior that looks like Mercedes lifted it straight out of the three-pointed star’s flagship sedan, the S-Class. And there’s S-Class function as well as form inside this new C-Class, too.

The new 2022 Mercedes-Benz C-Class has the same MBUX user interface system that made its debut in the S-Class last year, and it offers much the same high level of functionality – minus the 3-D digital instrument panel and augmented reality head-up display. But you do get pretty much everything else. In terms of its ambiance and touchable technology, the 2022 Mercedes-Benz C-Class interior makes the cabins of BMW’s 3 Series range and even Audi’s A4 look and feel like downmarket items. 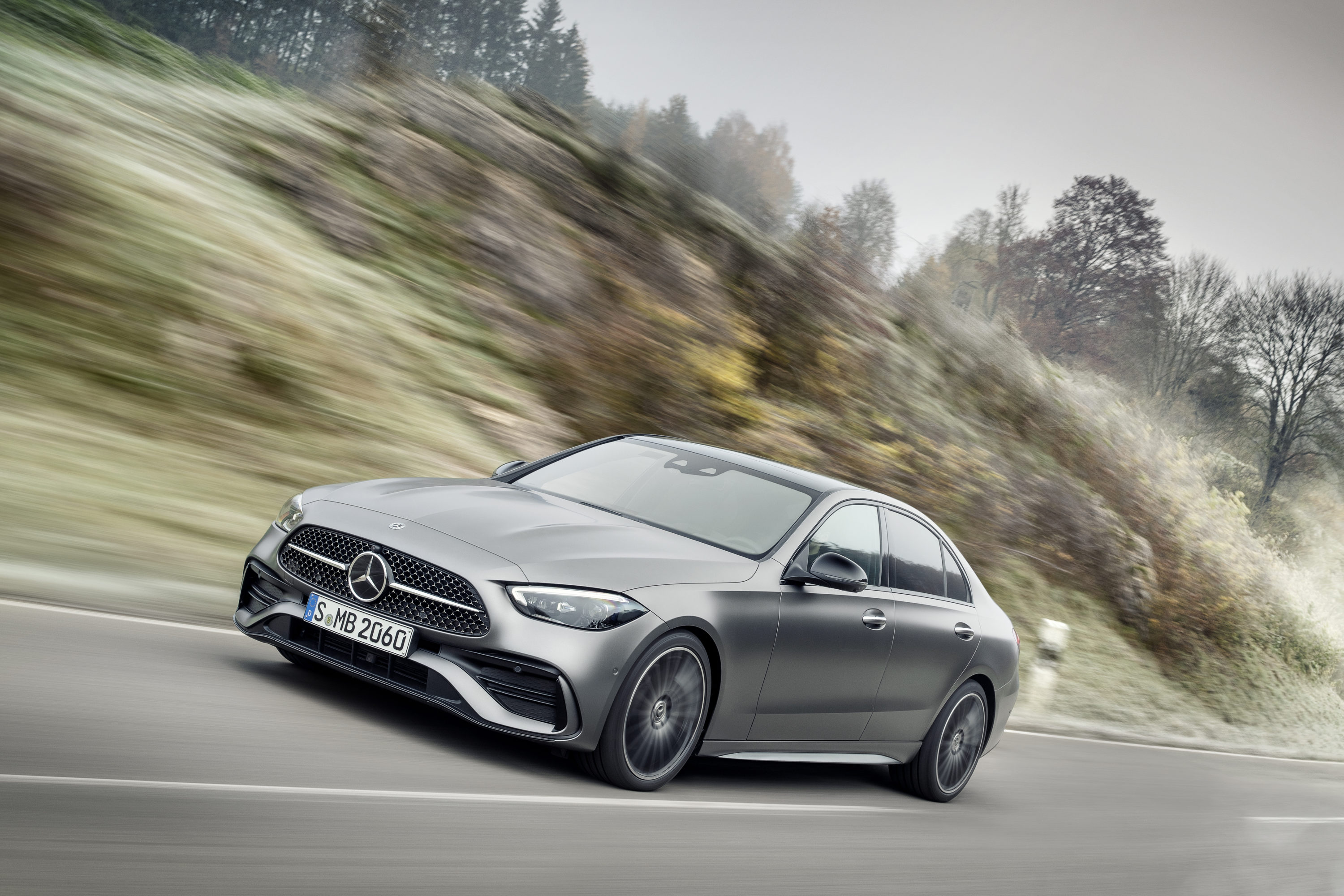 The rectangular digital instrument panel stands atop a dash that rolls forward under the windshield and enhances the sense of spaciousness. As in the S-Class, the portrait format central touchscreen flies over the dash, its silver edging streaming back into the center console’s upper surface like wingtip contrails from an F-15. However, in the S-Class the console structure below the central touchscreen simply headbutts the lower dash. In the C-Class its outer edges curve left and right and run in an unbroken line to each corner of the cabin. 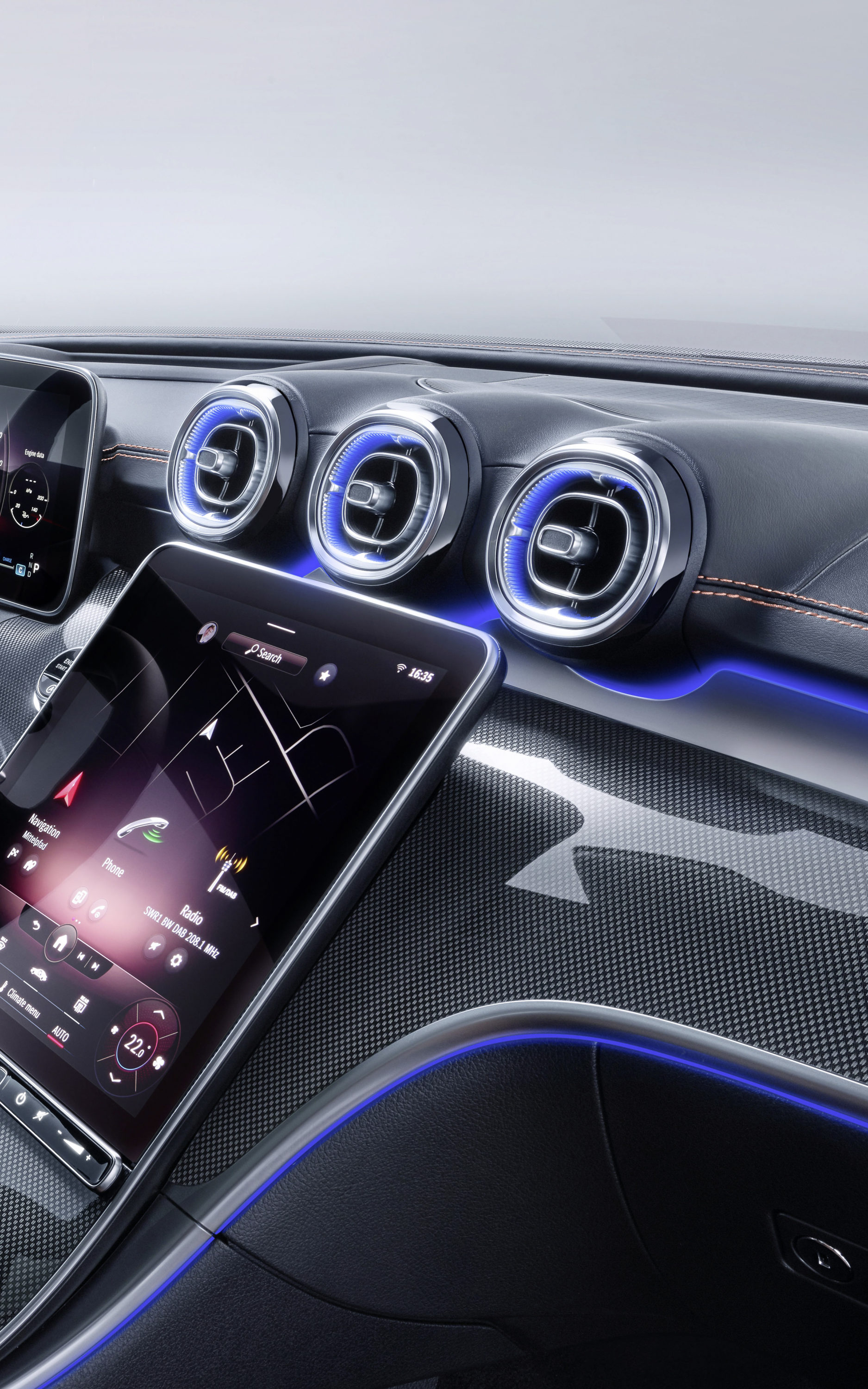 Other S-Class tech: The individual elements of the semiotic seat controls on the doors are touch-sensitive capacitor switches, meaning the switches don’t move. These switches feel odd at first—you expect movement—but once you get used to just touching rather than pushing or pulling on their elements, you won’t want to go back to the old system: You can now make much finer adjustments to the seat than before.

The 2022 Mercedes-Benz C-Class will go on sale in the U.S. early next year

Likewise, the steering wheel has the same haptic touch controls as the S-Class on the horizontal spokes. They too are a little tricky to work until you get used to the idea that light fingertip touches and sweeps are all you need to make something happen. And, as in the S-Class, the MBUX voice recognition system can recognize which of the car’s occupants is speaking.

Codenamed W206, the 2022 Mercedes-Benz C-Class sedan is built on an evolution of the outgoing W205’s platform, re-engineered significantly to package a 24.5-kWh battery that will deliver a 60-mile pure electric range for the plug-in hybrid models, and a new rear axle with optional rear-wheel steering. The wheelbase is an inch longer, and much of that has gone into improving rear legroom. Overall length increases by 2.6 inches, and width by 0.4 inch. One measurement shrinks, however: The roofline is 0.4 inch lower. 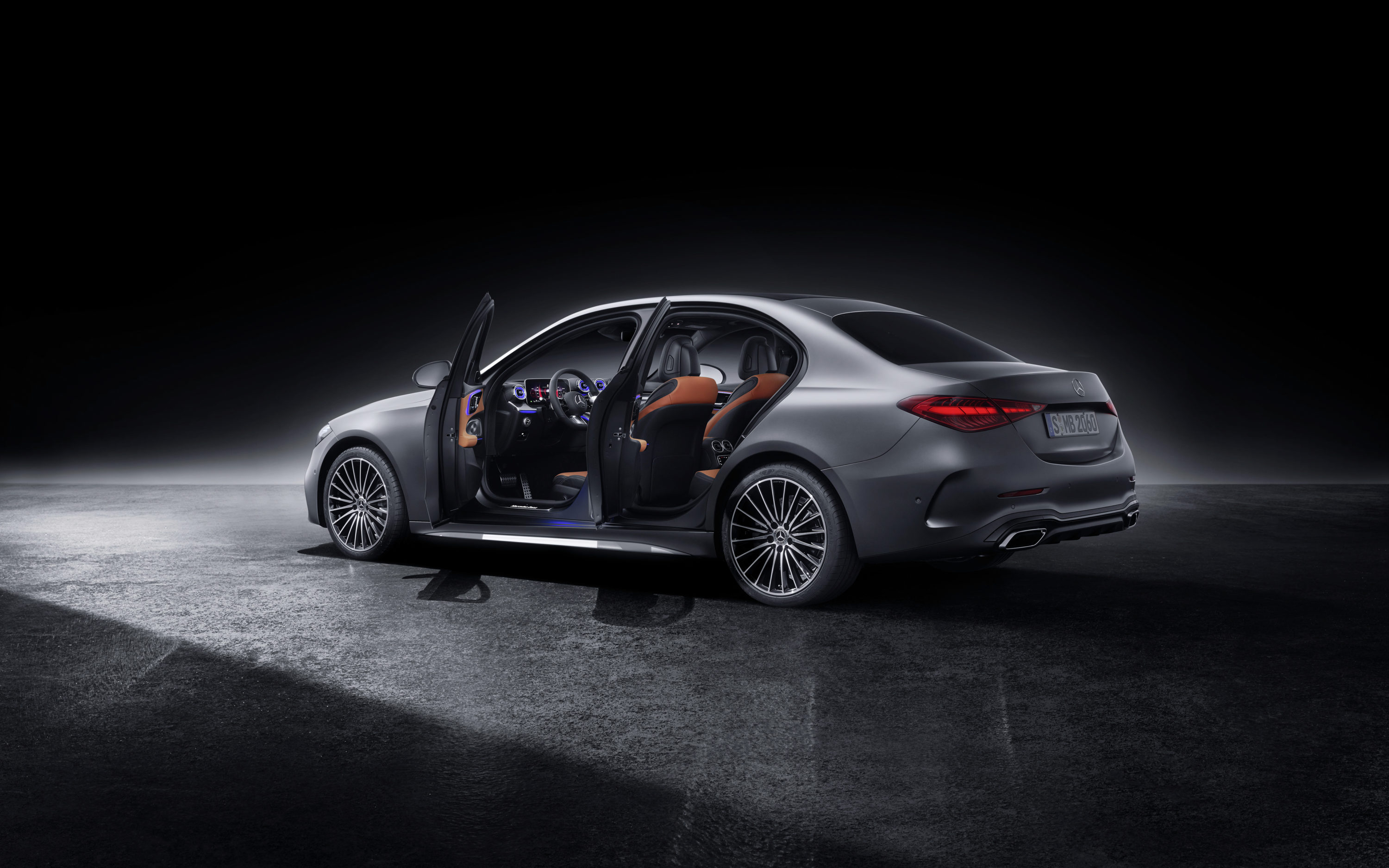 Up front is a revised multilink suspension similar in design to that of the new S-Class. And as in the new S-Class, the optional rear-steer system turns the rear wheels in the same direction as the fronts at speeds exceeding 35 mph, to enhance stability. They turn in the opposite direction at less than 35 mph to improve agility. In the S-Class, the rear wheels pivot 10 degrees or 4.5 degrees, depending on wheel and tire size, but on the C-Class they only turn a maximum of 2.5 degrees.

Why? In the S-Class, rear-steer is all about making the big sedan more maneuverable, but in the smaller C-Class it’s all about handling, said chief engineer Christian Früh. With same-phase steering at more than 35 mph ensuring a more stable rear end, Früh’s engineers were able to tighten the W206’s steering ratio to improve its response. U.S.-spec C-Class models will not offer rear steer at launch, but the technology will almost certainly be included in AMG versions of the W206.

The 2022 Mercedes-Benz C-Class will go on sale in the U.S. early next year in C300 and C300 4Matic specification, powered by the M254 2.0-liter four-cylinder engine that made its debut in Europe last year.

Sharing the same bore diameter and bore centers, the M254 is basically the 3.0-liter M256 inline-six used in the E450, with two cylinders lopped off. It also gets the 48-volt integrated starter-generator setup, with its 20-hp EQ Boost and coasting functions. The engine makes 255 horsepower at 5,800 rpm and 295 lb-ft of torque from 2,000 to 3,200 rpm. Driving through Mercedes-Benz’s smooth nine-speed automatic, it delivers a claimed 0-60-mph acceleration time of 6.0 seconds.

Every exterior panel is new, but unlike the dramatically upscale interior, the execution is evolutionary rather than revolutionary. Forms, surfaces, and graphics echo those found on the new S-Class and the face-lifted E-Class. The crisp line that begins on the front quarter panel and extends rearward just under the side windows echoes the S-Class, for example, while the frowning grille graphic and the twin power bugles on the hood mimic the E-Class. The taillights combine design elements from each of the new car’s larger siblings.

Three trim levels will be available at launch: Premium, which includes a standard sunroof; Exclusive, which, among other things, adds the Parktronic parking assist system, inductive wireless charging for mobile devices, and the excellent Burmester 3D audio system; and Pinnacle, which gives you the MB navigation system with augmented video and the head-up display. All cars will roll on 18-inch wheels. 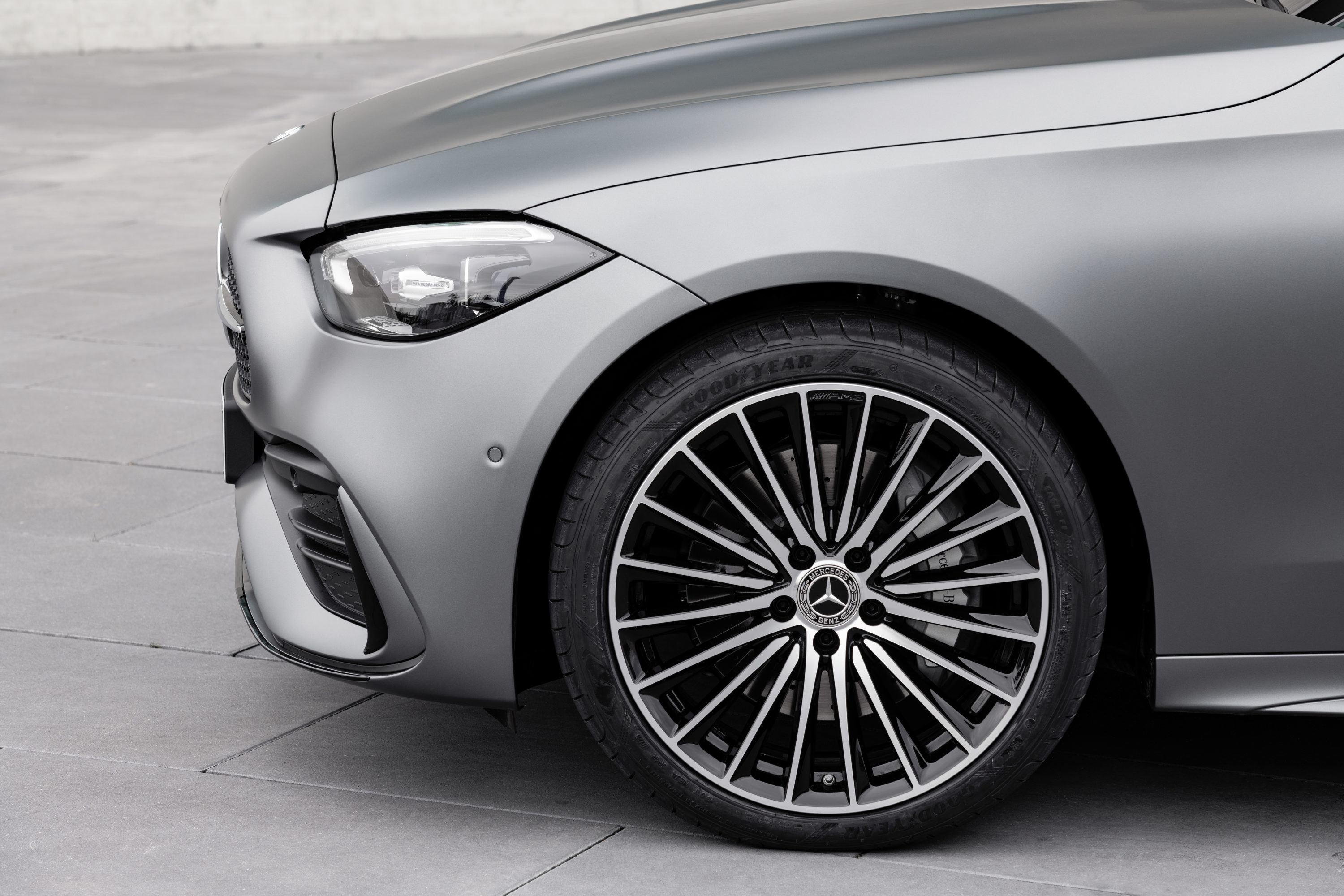 Interior and exterior design elements and the MBUX hardware and software aren’t the only S-Class influences evident in the new 2022 Mercedes-Benz C-Class: The impressive ride comfort and readily apparent road-noise suppression makes it feel much more like its luxurious big brother than any compact Mercedes sedan has since the original 190E, though we should note all of the test cars present for the model’s media launch were fitted with the adaptive-damping suspension that’s an option in Europe.

There’s a touch of float in Comfort mode, but even so, our test car, also on optional 19-inch rims shod with 225/40 and 255/35 Goodyears front and rear—and fitted with the optional four-wheel steering—stayed remarkably flat through corners. The suspension in Sport mode deftly calms the slight float without increasing impact harshness, a crucial accomplishment. If you like that but don’t want the extra business from the powertrain that Sport mode also delivers, go to Individual mode, put the suspension in Sport, and leave everything else in Comfort.

The steering is terrific, and although you don’t notice the rear wheels doing their thing other than during U-turns when the car’s tighter turning circle is obvious, there is, as chief engineer Früh promised, sharper initial response the moment you pull the steering wheel off center, and greater support from the rear end through corners. What’s nice about this new C-Class is the complete absence of rambunctiousness; you can hustle it down a rough and ready country road at a surprising pace, yet it always feels calm and controlled.

Although the traditional sedan might seem a dying breed, the Mercedes-Benz C-Class has in fact been a global best-seller for the marque throughout the past decade. More than 2.5 million examples of the outgoing W205 model alone have been sold since the car’s launch in 2014, with China being its single largest market since 2016. The 2022 Mercedes-Benz C-Class—roomier than its predecessor, and with style, technology, and manners influenced so much by the car that defines the Mercedes brand—looks set to follow in its wheel tracks. 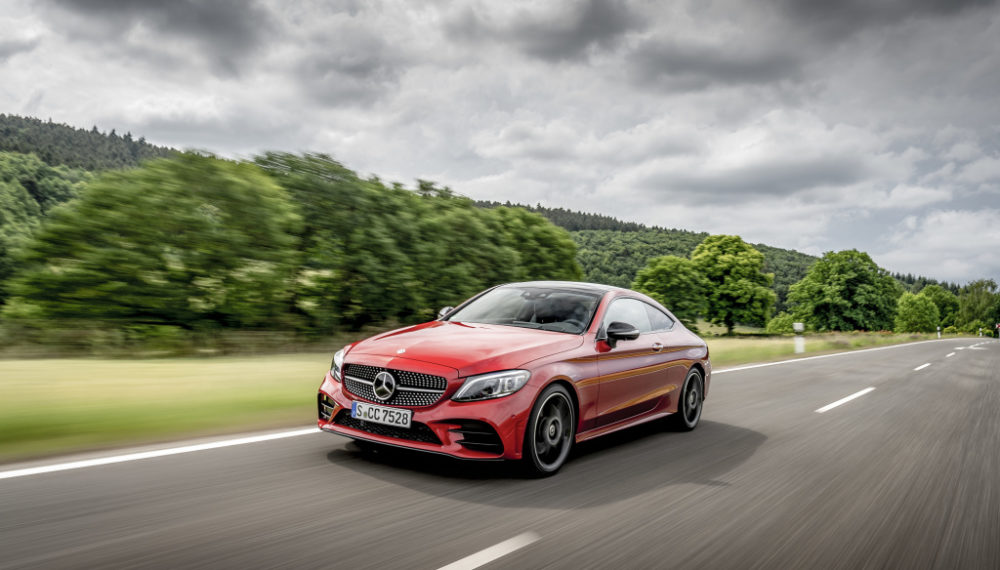 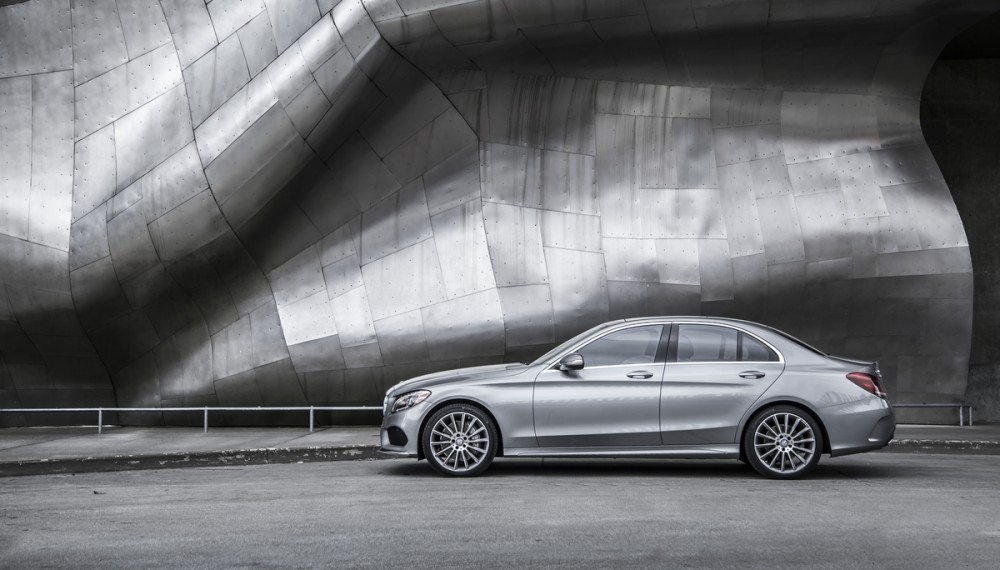 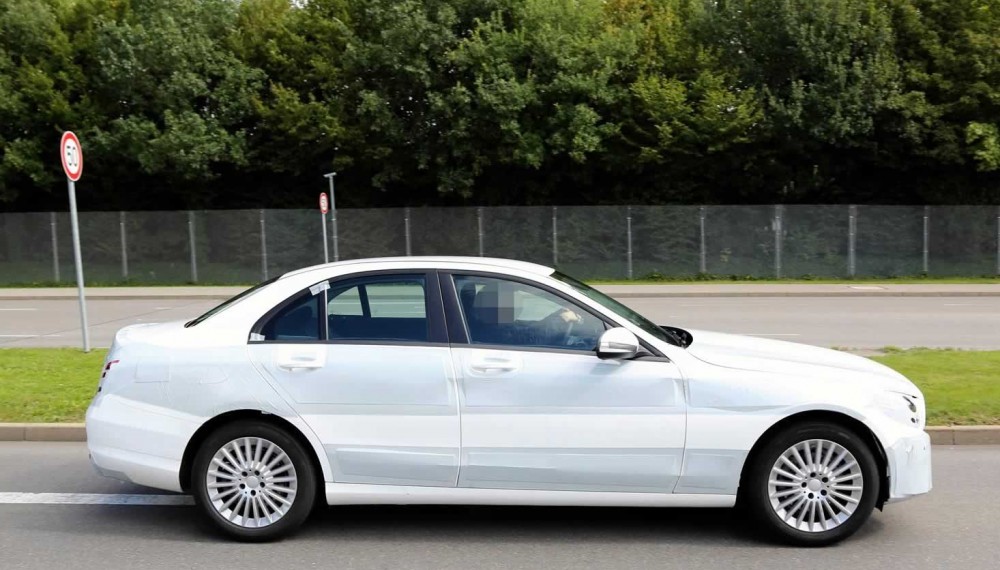