Founded in 1967 by engineers Hans Werner Aufrecht and Erhard Melcher, the company has continued to build on its position as one of the leading performance and sports car brands through numerous successes in motorsport and the development of unique road cars. Legendary model icons such as the 300 SEL 6.9 AMG racing touring car, the 300 E 5.6 “The Hammer”, the CLK DTM or the SLS AMG Electric Drive have repeatedly confirmed the brand’s reputation as a gamechanger. 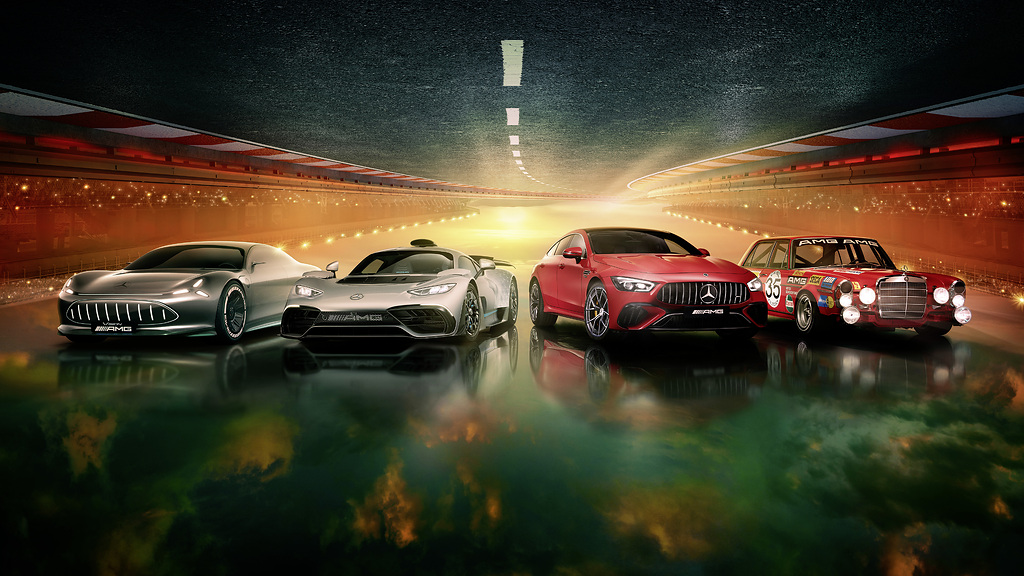 This is still true today: the Mercedes-AMG ONE brings modern and efficient Formula 1™ hybrid drive technology from the racetrack to the road for the first time in the world (fuel consumption weighted, combined: 8.7 l/100 km; combined weighted CO2 emissions: 198 g/km; combined weighted electrical consumption: 32 kWh/100 km)[1]. With one combustion engine and four electric motors, the hypercar produces a total of 782 kW (1063 hp) and proves how the Future of Driving Performance sets new records.

The Vision AMG design study provides a glimpse of the future: Beneath the shell of the four-door coupé is the independent AMG.EA platform, which is currently being developed in Affalterbach for all-electric performance models with revolutionary e-drive technology.

“AMG has been reinventing itself again and again for 55 years. As was once the case with our founding fathers, there is a very special spirit of optimism in Affalterbach today. The course is clearly set for an electrified future. And as in all the past years, our standards for future projects are extremely high. I am proud that we can rely on the best employees at our location. Because they are real gamechangers that make AMG so special. And we want to emphasise that just as much with our campaign,” says Philipp Schiemer, Chairman of the Board of Management of Mercedes-AMG GmbH.

“55 years – changing the game” notices this spirit and translates it into a 360-degree social media campaign – with authentic stories of people and vehicles as video clips and stills. The implementation contains numerous, mutually complementary elements. AMG employees communicate their statements on “changing the game” via their social channels. The Brand Ambassadors will.i.am, Susie Wolff, David Coulthard and Lewis Hamilton underline the core message with their statements and build the bridge from tradition into the future.

Iconic pairings of historic and current as well as future vehicles bear witness to the brand’s unbroken innovative power. In addition, editorial contributions on the official Mercedes-AMG website, a special exhibition in the Mercedes-Benz Museum, a temporary exhibition in the AMG Private Lounge in Affalterbach, as well as a special episode “Inside AMG” on YouTube pay tribute to the 55th anniversary of AMG from different perspectives. This also applies to direct customer contact at the point of sale. Here, backdrops with the key visuals refer to the anniversary. Particularly exciting has been the renewed collaboration with various content creators like Sparkly.jada, kayo.daniel or Nictures, who, in keeping with the campaign, are distributing clips on the TikTok platform about “changing the game”.

The current Mercedes-AMG portfolio comprises more than fifty vehicles. The selection ranges from performance vehicles in various body styles to completely independently developed sports cars such as the Mercedes-AMG GT 4-Door model and the new Mercedes-AMG SL. The range of powertrains has also been continuously developed in line with market requirements and customer wishes and currently offers efficiency-optimised combustion engines with four, six or eight cylinders. In addition, Mercedes-AMG is consistently pursuing the path of the Future of Driving Performance: Performance hybrids with an independent drive layout and technology from Formula 1™ are offered under the E PERFORMANCE label. The portfolio also includes all-electric AMG derivatives based on the Group’s own EVA2 platform. In the near future, completely independent battery-electric AMG models will also follow, which will be based on the new, completely in-house developed electrical architecture (AMG.EA).

[1] The figures for fuel consumption and CO2 emissions are provisional and were determined internally in accordance with the “WLTP test procedure” certification method. Confirmed values from the technical service or an EC type approval or certificate of conformity with official values are not yet available. Differences between the stated figures and the official figures are possible.